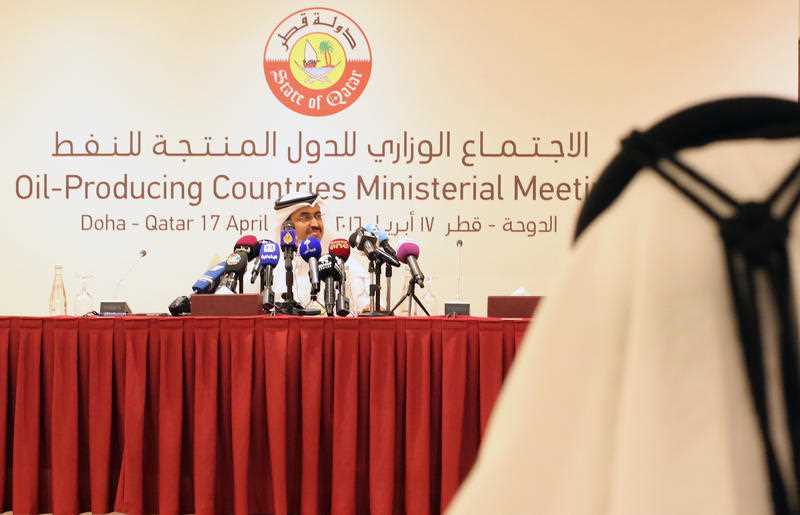 Oil deal a no-goer in Doha. Share prices should fall!

Who would have thought that Saudi Arabia and Iran would have killed off the chances of a deal to stop oil prices and therefore share prices slumping? These pain-in-the-neck oil producers, whose contribution to world happiness is not legendary, have made an oil deal a no-goer in Doha, so we now have to live with the consequences.

Yesterday, Reuters was reporting that one of its team had seen the communiqué that was telling the world that a deal had been worked out but this was before the actual meeting. There were many who thought that Doha was simply going to be a rubber stamping of an oil production freeze proposal that surfaced in February. This was the month when share prices started their path higher, after a shocking start to the share market year, as oil prices plummeted.

Doha always had one clear problem — Iran was not going to show up and it wants to increase its production to its pre-sanctions levels. It’s potential second issue was how stubborn Saudi Arabia was going to be.

How stubborn? In a word — very!

The Saudis said that if all oil producers did not sign, the deal was off. Previously, it had pledged it would respond by increasing production even more, which would send oil prices down. This is a perfect scenario for hedge fund managers and their short-selling ways, so I expect negativity on markets today. Thank you Iran and thank you Saudi Arabia and thank you hedge fund managers!

But is it clear that oil prices have to slump? Amrita Sen of Energy Aspects speculated oil prices could fall below $40 on Monday in a knee-jerk reaction, which in turn will take share prices down.

"While today’s lack of a freeze deal has no negative impact on balances - since Iran is really the only country likely to raise output substantially - it has a huge negative impact on sentiment, especially as the deal had been hyped up so much," she said. (Reuters)

This bad news for shares coincides with the old “sell in May and go away” so Friday would have been the best day to sell off and head off for a holiday with your cash, as these dopes in OPEC have ruined an overdue recovery for global stock markets.

Against this, some analysts argue that the oil supply balances around the world compared to demand say there should be a slump in oil prices from current $US40 a barrel levels to the $US25 we saw earlier this year but you never know what negative speculation in oil markets can do.

What bugs me is that this failed meeting should cause market confidence to turn to fear and loathing, which then works on business and consumer confidence, investment decisions and, ultimately, on economic growth. As the IMF pointed out last week, the world needs growth to justify the excessive monetary expansion with quantitative easing, but if stock markets overreact to this no goer in Doha, then we could remain in a subdued growth environment, where worries about banks and mining companies become excessive, hurting their share prices.

Remember, BHP was up 19% last week and I expect it will lose a bit today.

So will we go back to a $US25 a barrel price and all the negativity we saw in January? Rationally, I’d say no because the low oil price has killed off a lot of higher cost US shale oil producers. On April 8, Baker Hughes told us that 55.2% of US rigs have been shut down, which is huge. “Rig count is again at the lowest level since Baker Hughes started counting rigs in 1949,” the rig counting group reported. “It is likely the lowest back to around 1860 or 1900, if only rotary drilling rigs are counted.”

And global demand from slightly better growth should help hold prices up a bit. However, we do have to deal with the lack of rationality on speculative oil and stock markets, so I’m bracing for an ordinary day, probably a week and even a month on stock markets. I never say this but I hope I’m wrong.