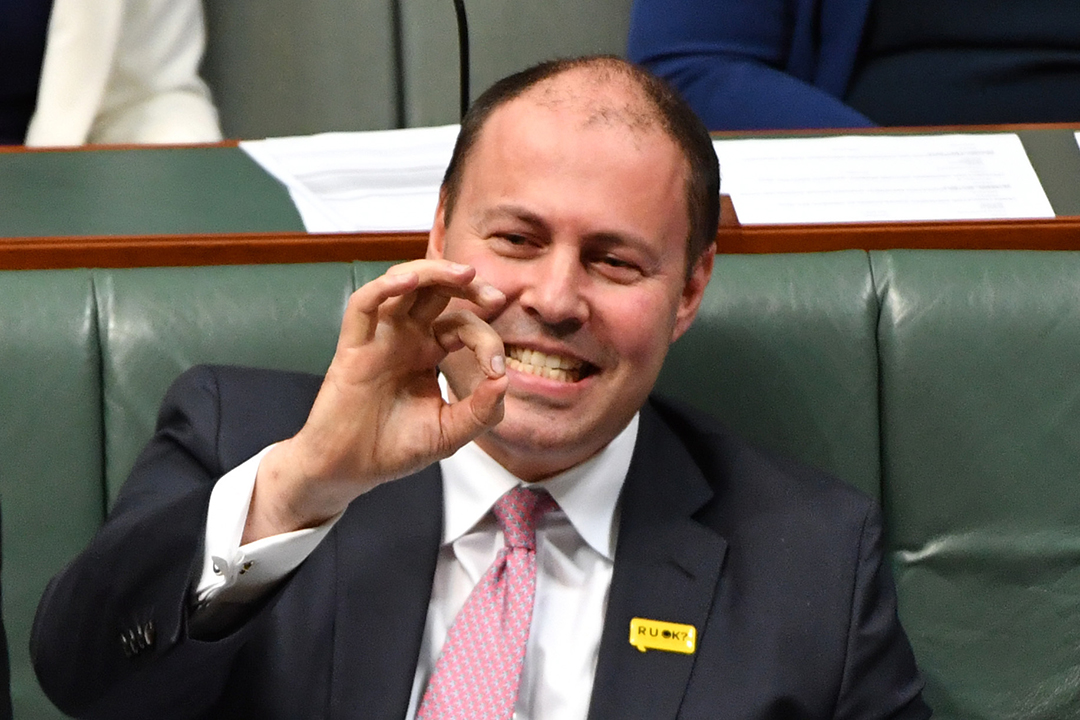 No more tax cuts for you, yet!

Nineteen thousand people lost their jobs last month after 12,500 gained work, if you’re willing to believe ABS stats as gospel. Of course, they’re not spot on numbers. More or less people could have lost their jobs but we use statistics to tell us the trend and the early signs are a little worrying for the Government’s gamble.

The Canberra leadership is punting that the economy doesn’t need any extra “oomph”. Just like that line from Seinfeld, the message to us Aussies is: “No more tax cuts for you!”

But it looks like a hell of a lot of us are paying down debt rather than going out and spending like there’s no tomorrow. So Treasurer Josh Frydenberg is being prompted to throw more money at the problem rather than relying on more interest rate cuts, which if you can trust recent history, could be used to pay-off borrowers home loans more quickly.

This is great personal money management but if we all save and we all cut back on spending, the economy will fall into recession, the jobless rate will rise, businesses will go bankrupt and spending will fall, which will kill job creation. And that will hurt business and consumer spending, as well as economic growth and we will save less. Economists call it the Paradox of Thrift.

So saving is a problem. It’s great when confidence is rising and everyone is spending and investing in business because it feeds the economic growth that the spending fuels. However, local confidence levels aren’t going gangbusters so this week’s data drop was crucial to what Josh might do.

Let me be honest. I was rooting for a good week for data and until Thursday, I thought the Government was getting a break. Here’s why:

• Tuesday brought an improving business picture, with the NAB business confidence index rising from a six-year low from —0.3 to +1.7, while the business conditions reading, which assesses what business is like now, rose from 1.7 to +3.

• Wednesday saw the Westpac consumer confidence reading sneak up 4.5% to 97 and while this is good, any result under 100 means the pessimists are outnumbering the optimists.

• Then Thursday brought a 19,000 job loss over October, when economists expected a 15,000 increase. Now this was the first jobs drop in 17 months, which is spectacular. But we have to ask: is this the start of a trend?

AMP Capital’s Dr Shane Oliver thinks so and he thinks Josh should move to pump up demand using his Budgetary firepower. “The rising trend in both unemployment and underemployment seen this year indicates that “spare capacity” remains high in the labour market is actually increasing,” he wrote yesterday, “Against this background, it’s hard to see wages growth improving any time soon. While the RBA rate and tax cuts to date should help limit the rise in unemployment, they are unlikely to be enough to get unemployment down to levels necessary to see stronger wages growth and higher inflation.

“Ideally fiscal stimulus – in the form of faster tax cuts, a boost to Newstart, investment incentives and a bring forward of infrastructure spending where possible – is needed from here.”

A tax cut can offset too much saving so some economists and Labor want the second stage tax cuts (due to come in from July 1, 2022) brought forward. These would see the threshold of the 32.5% tax bracket increased from $90,000 to $120,000, providing a tax cut of up to $1,350 a year for taxpayers in this income bracket and above.

This is a big test for the Treasurer and his team’s guessing power.

I told my colleagues on Sky News on Friday morning that I thought Josh would gamble that Christmas spending, a Trump trade deal, the eventual impact of the three interest rate cuts and the tax cuts will kick in to bolster confidence and spending.

Rate cuts do come with a lag-effect of six to even 12 months, so there’s reason to gamble and he could be helped by reports that Sydney house prices will rise by 14% and Melbourne’s by 15% next year!

When homeowners feel wealthier as the value of their homes rise, they do spend and it helps growth.

As the country’s No.1 number-cruncher, I’d like to think Josh knows more than people like Shane Oliver and yours truly, but we know with economics and forecasting, it is a guessing game.

I hope Josh, whose rating in the media and in business is high, is the best guesser in town! So how will we know if he’s a genius guesser? Well, firstly, we’ll know that if we get to February and the Reserve Bank is so happy with the progress of the economy that it doesn’t cut interest rates. And second, if its associated statement implies “no more rate cuts for you!”