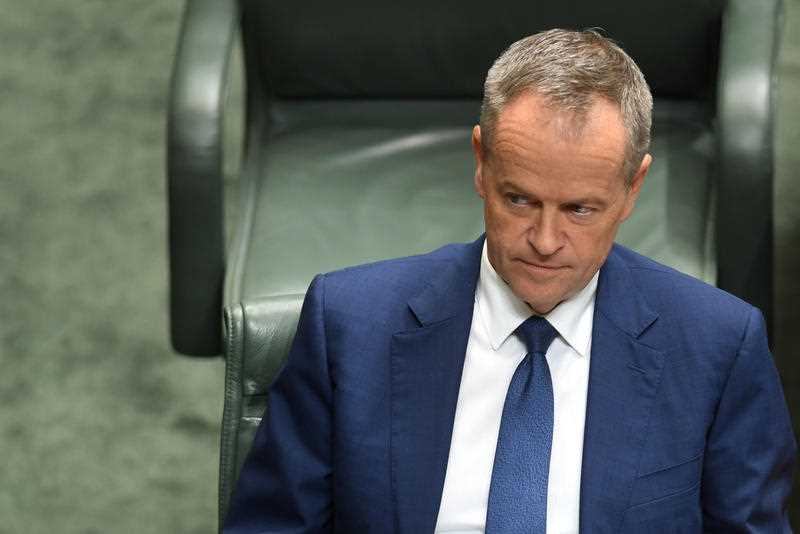 NDIS will prove if Shorten has the guts to be PM!

At the Brisbane PwC post-Budget breakfast yesterday, I shared the speakers’ platform with a different Prime Minister, who has put my views on Bill Shorten and his Opposition team into perspective. This morning’s media talk says that they might not support the rise in the Medicare levy in 2018 to fund the National Disability Insurance Scheme (or NDIS).

Usually I do my Budget analysis with former PM, John Howard, but this year he went to PwC’s Melbourne breakfast and the recently retired Kiwi leader John Key came off the bench to fill the big shoes that help me and others draw over 2000 people to the gig!

It’s no surprise to any of you to read that we have a leadership problem in this country, though I think Malcolm Turnbull is on the 'improver' list, with a fair way to go. However, Key is my pin up boy for great modern day leaders.

When I heard he was speaking at the event, I toyed with the idea of calling Scott Morrison’s fiscal blueprint the “Get some guts Budget” out of respect of one the best parliamentary speeches I have heard delivered by Mr Key.

(If you’re like me and praying for a leader to sort out our worrying parliamentary democracy right now, then have a look at this 26 seconds video of a Key speech, which still sends shivers down my spine when I see his passion for a pretty important subject. Check it out here and see what we’ve been missing!)

On reflection, on Tuesday night after hearing the Treasurer’s speech, it was clear that Scott Morrison had not shown the guts to really create an economically responsible Budget because he knew it would never get through the crazy and economic confidence-sapping Senate. I believe the Budget impasses we have seen since 2014 have hurt business and consumer confidence, as well as foreign investor enthusiasm. And it has come at a bad time when the mining boom was disappearing and the GFC effects didn’t help our Budgets either. This chart below shows the story using blue and red lines. At first, the GFC led to spending increases to avoid recession and then the end of the mining boom took away tax revenue. The red line went higher than the blue line and we were in deficit country. 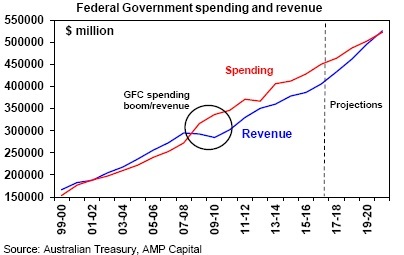 I reckon Scott has shown some guts creating a Labor-style Budget, with higher taxes and big outlays on infrastructure but with more spending cuts. Clearly, he wanted a Budget that the Senate will pass. And because he looks like a Liberal Treasurer going where no man has gone before, I invoked the Star Trek imagery in calling it the “Beam us up, Scotty, Budget.”

It’s all about the up, with the likely effects to be growth up, jobs up, business investment up, wages up, inflation up, interest rates up and, of course, while the deficit will come down, debt continues to go up. More on that in a moment.

And this brings me to the Bill Shorten big guts test. The talk is that Labor and the Greens could say no to the Government’s NDIS plan. If they do, it’s purely political. The people who need the NDIS should not be a political football.

Sure, the Government has swallowed its lower taxes pride to get some political advantage by showing that it will support a Labor policy. Even better, it will fund it properly by raising the Medicare levy from 2% to 2.5% by 2019.

Labor has those out there saying that it had funded it properly but no one with sketchy knowledge believes them. Even professionals, who really know, dispute the issue.

As the SMH reported: “Professor Hal Kendig at the ANU centre for Research for Aging, Health and Well-being said neither previous governments had fully funded the scheme, despite their ambitions.”

I can understand the Greens finding it hard to agree with a Liberal/Nationals Government (they’re simply politicians of a very different colour) but Labor needs to fight Malcolm Turnbull on a different battlefield.

Bill Shorten has to show some guts and admit that this is a surprise policy decision by his ‘enemy’ that’s good for the NDIS he championed but never got the support to fund it properly.

Great leaders know when they have to take a step back to take two steps forward. They have to pick their fights wisely. This isn’t a wise fight.

This is a big man’s test for you, Bill. I hope you have the guts to pull it off.

P.S. The Turnbull Government found $115 million to better fund mental health in this country and I know the Financial System Inquiry boss, David Murray, was chuffed to see references to assistance to fight eating disorders were mentioned for the first time at a Budget show-and-tell. David is the Chair of the Butterfly Foundation, which has been doing great work to help those Australians (both women and men) trapped by eating disorders.