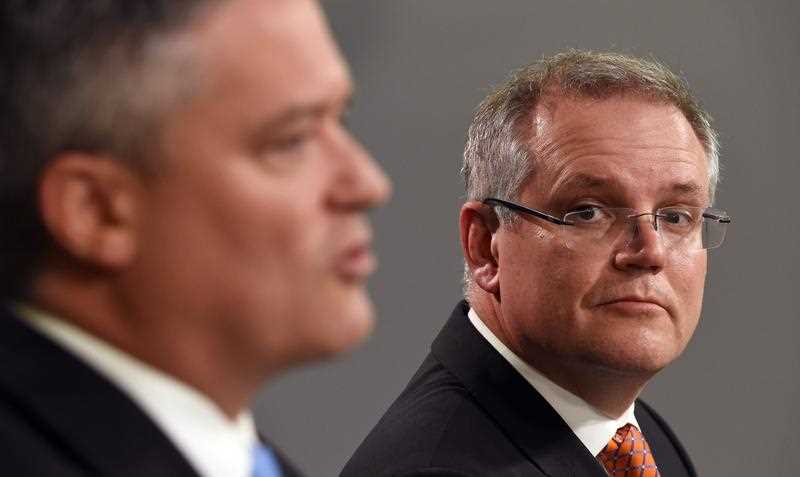 My advice to my old student Morrison - talk big, do little

My old economics student, new Treasurer Scott Morrison, is using the right wording — at least politically — in promising policies that will encourage us to “work, save and invest” and he thinks tax reform will do that.

Undoubtedly part of our 24 years of continuous economic growth was due to the GST and the tax cuts that came with John Howard and Peter Costello. It helped other tax changes, such as lower tariffs introduced under Messrs. Hawke and Keating and others who played Treasurer under Labor, like John Dawkins and Ralph Willis.

Also, politically, he wisely said this kind of tax pie-in-the-sky would not happen over the next 12 months but before the next election. Once again, that’s good politics Scott but what about what I have marked him on in the past — economics?

One thing that came out of his cake-hole that worried me was this: “Our focus will continue to be on the spending side of the budget. We have to give ourselves scope to pursue tax reform."

He went on to argue that we have a “spending problem, not a revenue problem.”

This sounds like a slogan, though it’s a good slogan, but I hope he starts talking about killing bad spending so he can do good spending, such as building wider roads and airports like Badgery’s Creek!

My best advice to my old student is to do little, apart from saying stuff like he did yesterday such as he wants to “encourage and inspire” Australians.

Let’s hope he doesn’t let the big end of town talk him into doing big, costly, scary stuff until we’re growing faster than 3% and unemployment is coming down.

We have to hope that China can turn around its economic story, which will help Wall Street and send our stock market up. We have to cultivate confidence, and with interest rates where they are and with the dollar perfect to create growth, as Treasurer, Scott’s goal should be about getting business owners willing to invest and create jobs.

The RBA also has a couple of shots left in their interest rate locker but the best outcome for the economy would be if we can get growth going faster without another rate cut, as a cut would be like admitting that the economy is not really up to improving under current policies.

I did like that Morrison provoked us to ponder whether we’re taking “advantage of the opportunities we’ve got right now”, so it’s up to him and Kelly O’Dwyer (the new Small Business Minister) to get this two million strong band of businesses believing that the worst of the GFC is behind us.

I know the GFC ended in 2009 but the demand and confidence hangovers are still with us because Europe needed quantitative easing, China is stumbling and the US is still too scared to raise interest rates.

Wisely, Morrison said he doesn’t want to be a commentator but someone who put measures for growth in place. This is exactly what he should do but he also needs to keep talking to business and aspirational Australians because they’re the ones who’ll turn this economy around, with a little bit of help from the Chinese.

China led the global recovery in 2009 and its slowdown is hurting Wall Street and the Fed’s confidence to raise interest rates. If China can give the US central bank some guts to raise and stocks start heading up, that will position us to see our economy improve between now and the next election, which I suspect Scott will love.

I’m sweating on a stimulus package from China and undoubtedly, because he was taught well in economics, I bet he is too.

Keep talking us and the economy up, Scott, and share your great economic reforms that one day you’ll implement. And say a few a prayers that the Communists of China will be our collective saviours!