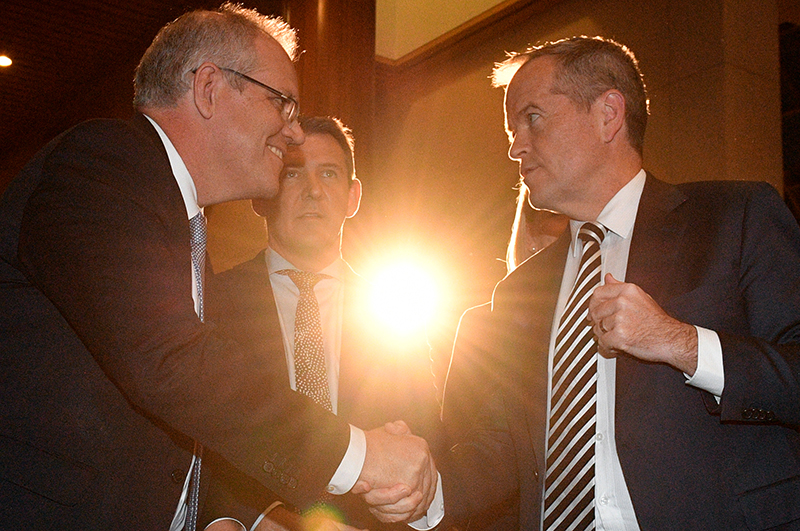 I know Billy Slater, Bill Cosby, the demand to sack the ABC’s Emma Alberici and a radical recycling plan are ‘important’ news stories but I would’ve thought the fact that the country’s Budget Deficit is tumbling rates a decent headline.

The SMH’s website gave the story no prominence. The AFR gave it front page coverage but this was the headline: “Tax surge paves way for pre-election spend”, which has refused to say anything great about the achievement.

Now, don’t think I’m here rattling the can for Scott Morrison (yes, my old economics student). It’s not the case. I’m more rattling my own can, as I’ve been arguing that policies to create economic growth would create jobs, which in turn will boost tax collections while reducing government outlays on the unemployed.

When that happens, I’ve argued for a few years (here on Switzer Daily, on TV, on radio and in speeches I regularly do) that the deficit will fall. And the deficit and the way it feeds our public debt really worries a lot of people.

I saw Richo and Paul Murray stressing about it on Sky News only this week. They talked about how it blew out under Scott Morrison’s stewardship but they weren’t to know that in fact the deficit story was about to turn pretty positive for the new PM.

In case your favourite media outlet didn’t rate this Budget story, let me give it to you as interestingly as possible.

The headline should have been something like the one CommSec came up with: “Federal Budget: Smallest deficit in a decade.” However, the words “Federal Budget” could turn normal people off reading it.

I like “Australia’s debt disaster derailed! Put away the razor blades!” (Yeah, you have to fight mindless clickbait with mindful clickbait.)

Back to the actual story:

This is a huge story for those worrying about our public debt, which is fed by the Government’s deficits and is reduced by surpluses. And the quicker we get to surplus, the better it will be for our economy to ensure that if another GFC comes along, the Government of the day can do what Kevin Rudd’s Labor did in 2008 when it threw money at the problem.

The Costello/Howard (plus mining boom-created) surpluses gave Labor the ammunition to fight the forces of recession and helped us keep unemployment under 6%, when the USA saw the jobless rate hit 10%!

Just like personal finance, great budgeting gives you the firepower to borrow money, seize opportunities and weather financial storms. The fact that our budget bottom line is on the big improve is something worth celebrating and even headlining!

I have to say The Australian newspaper’s David Uren captured the right message to pass on to fellow Aussies with his “Surplus in sight ahead of election”. That’s why the PM will probably wait until May 18 so he possibly could crow that the Budget is balanced or even into a small surplus.

I used the word “possibly” because the Oz economy has to keep growing as fast or well as it has recently, which was predicted by the Reserve Bank and that, I’ve always argued, was on the money.

This means we have to watch Donald Trump and what his trade war might mean for world growth and our growth. Also, if Donald’s trade battles lead to a stock market crash, that could ruin Scott’s remote re-election plans and at the same time upset our increasingly rosy-looking apple cart!

Bill Shorten could inherit a damn good economy on the mend and if Donald doesn’t rain disaster on the world economy and global stock markets, it could be a great election to win.

Certainly, the one trump card Scott Morrison will have to play at election time will be the economic and Budget story, but given how media outlets rate these good news stories in their headlines, a lot of Aussie voters won’t either give or toss or worst still, might not even be told about it.

Of course, Government politicians will talk but who listens to pollies on the hustings?