Call me persistent but I know to get people to change you have to hound them and not let them off the hook. My wife, Maureen, has taught me that over decades!

You can’t let their little voice inside someone’s head sell them some cop-out story to prevent them facing the truth and making changes. So, if you’re thinking: “He’s not trying to make us richer in the future again, is he?” the answer is yes — an emphatic Y-E-S!

This week I was asked to talk to a group of doctors for an accounting business that wanted to say “let us help you get your business and wealth-building act together.” As I contemplated their challenges, which are defined by their overload of responsibilities and their undersupply of time, it became obvious that they needed to be influenced by the advice of the likes of Marcus Buckingham.

The author of books like “First break all the rules” and “Go put your strengths to work”, he found that successful people work in their strength zones and get other experts to make their weaknesses irrelevant.

Building up your money/wealth is about success or failure, which is why you need to think about your strength and weakness zones. I know some professionals who are great at their jobs or business and also are great at wealth-building but there aren’t a lot of these standout people.

Like a lot of professionals, many doctors need to take that advice. One doctor who I talked to admitted loving doing stock market investigations and investing but simply doesn’t have the time to do it professionally.

For those out there who like the idea of getting richer but are too busy to make it happen, this could be the most important story I’ve ever written. It comes from a succession of stories of people I know and like, who have been very successful but their day-to-day success has blinded them to the month-to-month and year-to-year mistakes they’ve been making in the management of their money.

In some cases, the people in question are too old to help but in other cases they have 15 years of work to help repair the situation. However, all of them should have been on clover for the years after work and before they eventually start pushing up daisies!

Why are they in difficult money situations? Some were successful and too cool to worry about money. Some are cynical about many aspects of the finance world. Given the behavior of too many financial planners, this can be partially understood but there was no excuse for any of them not asking a series of questions everyone should ask.

And here they are:

• What do I want to have as money/assets when I stop working?

• Given what I’m doing now, am I on track to make it happen?

• What do I want to achieve along the way to retirement such as school fees, investments, holidays, etc.?

• Am I capable of making all this happen?

• Can I trust these helpers?

The earlier these questions are asked the better, as there’s no secret to building wealth. Sure, some people can create a company like Apple or Virgin. Others can be CEOs or top executives as banks or mining companies but the everyday person can build wealth through an investment strategy that rests on regular saving — read, less wasteful spending — and having a good investment strategy.

Have a look at this chart, which I might have shown you before but it deserves to be shown again: 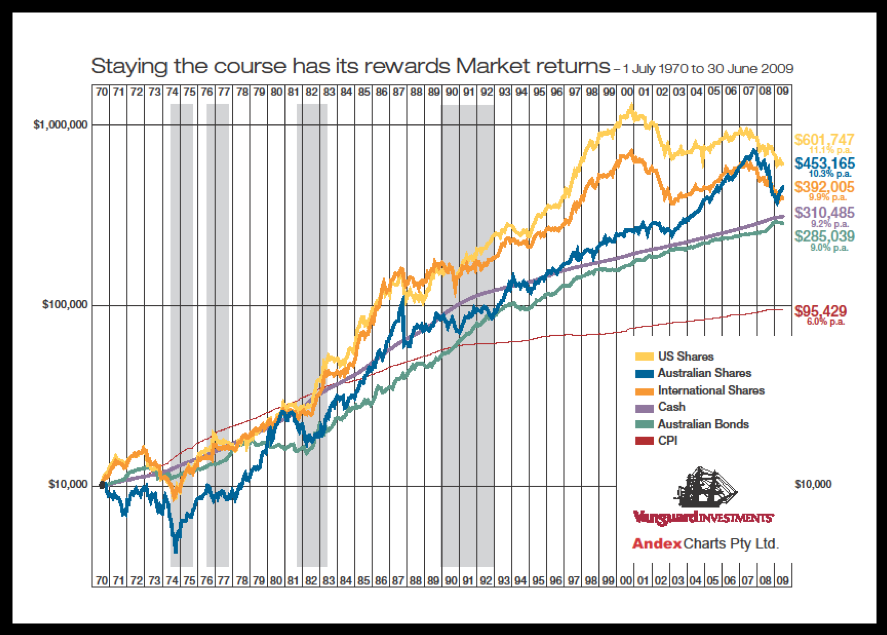 If you saved 15% of what you earn in your working life, you’ll retire on an annual income about two-thirds of your final wage simply via super. This is why salary sacrifice is a must for so many people.

So let’s answer the key questions:

Q1. What do I want to have as money/assets when I stop working?

A. Enough income to enjoy retirement. It will differ per person but you have to work it out.

Q2. Given what am I doing now, am I on track to make it happen?

A. You could work it out by finding out how much you save and how you’ll invest that saving but if it is beyond you, find someone who can.

Q3. What do I want to achieve along the way to retirement, such as school fees, investments, holidays, etc.?

A. Only you can list them but you have to do it if you want them to come true. Some people work and work and hope the money is there but they often find they have money for school fees but the retirement income disappoints.

Q4. Am I capable of making this all happen?

A. You have to work it out. If you read about it and you’re orderly and systematic, you could make a fair shot at it. Some super funds help their members answer some of these questions.

A. Your super fund might answer some of your questions, especially about what you might retire on, but you might need help with what the cost of living will be in 30 years’ time! Will I get a part-pension? These are the areas that a trustworthy adviser should be able to help you with.

Q6. Can I trust these helpers?

A. Most can answer a lot of these questions because they’re trained to do so but the trust bit will have to be tested. That does require hard work, lots of grilling, looking for references and testimonials and going to a number of advisers. Be careful of slick sellers because that’s their strength but don’t rule out help from an adviser. Make sure, however, you have the advice tested out by others — your accountant, lawyer or a wise person who’s a friend or family member.

Your financial position over time and when you retire is too important to leave it up to amateurs, who are living their money life in chaos. Some of my friends were sometimes like this and now they’re asking me to help. I’m happy to do so but hell, they have made a lot of mistakes because they lived in the present and ignored the future.

Warn your loved ones and yourself that you do have to ask these important questions ASAP! And more importantly, you have to get great answers. If you can’t do this on your own, don’t let being too tight hold you back from getting richer!