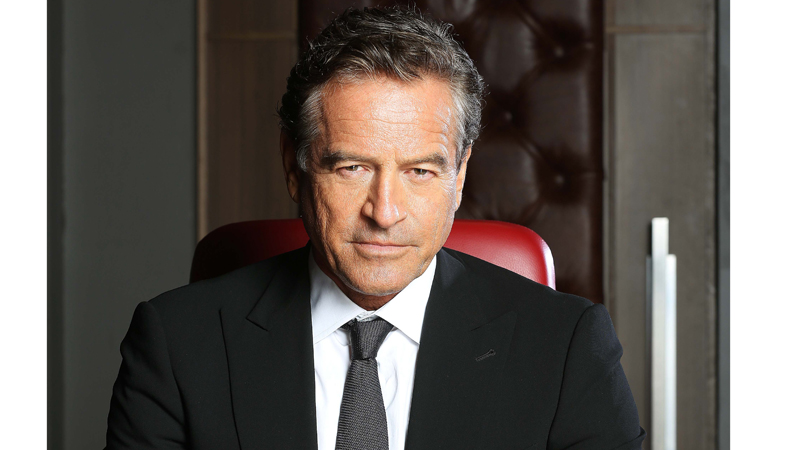 Having known Mark Bouris for over two decades (our friendship began when Mark launched Wizard), I often get the question: “What’s Bouris like?”

He won Kerry Packer over, which turned a good mortgage business into a great one that he eventually sold for $500 million to GE in 2004.

He barracks for the Sydney Roosters; he’s boxed Danny Green for charity; he’s a member of the North Bondi Surf Club (the PM’s a co-clubbie). And to outsiders, he doesn’t seem up himself. And he’s not, despite having to channel one of the world’s greatest pains in Donald Trump, as the local star of The Apprentice.

“I don’t channel Donald Trump,” he insisted. “But when I agreed to do the show, I told Freemantle Media that this had to be an Australian Apprentice — it had to be Australianised.

“I’m not saying I don’t like Trump, I will remain neutral on that, but I knew one thing for sure that his style of show wouldn’t work here in Australia. I decided to be less tough, though sometimes you have to be, but I wanted to be more encouraging. A bash up might work in the USA, but not here.”

He says he has met Trump twice and this is how he sees him: “You have to admit that he’s on song 24 hours a day. He’s never off brand and whether you like his politics or not, he is a phenomenon.”

And so is Bouris here in Australia, though a little more understated. And even thought he hosted Celebrity Apprentice, you find there’s a lot of the boy next door in this local phenomenon.

To up-and-coming small business entrepreneurs, who he regularly talks to at events around the country, he’s an inspiration. And why wouldn’t he be? He admits to being of pure Western Suburbs working class and when I asked him years ago who inspired him, he didn’t think twice. “My Mum and Dad,” he said.

Mark backs himself and is no softy. He was trained as a Chartered Accountant, so he’s careful with his money when it comes to business.

And business is what he’s always wanted.

“I always wanted to be in business for myself, mainly because I don’t like people telling me what to do,” he admitted. “But I didn’t have the wherewithal to do it in the early stages.”

He thinks his self-belief is both a strength and a weakness. He argues that his self-reliance is great for coming up with business ideas, but he says because he’s not a great listener (“and good business managers have to be good listeners”) he defers the running of his companies to others, who are strong where he says he’s weak.

As the entrepreneur, he steers or sets the course for his business but appoints a CEO to be at the helm on a day-to-day basis.

“As the great Jack Gibson said to me (and he said it to me direct): play to your strengths, train your weaknesses,” he recalled. (Gibson is regarded as the Vince Lombardi or super coach of Australian rugby league.)

He also admits his stubborn, steely self-belief and his difficulties with listening haven’t been great for his personal relationships, where loved ones have made recommendations about life matters. “I’ve got to get better at that, at my ripe old age, and I will get better at that.”

Despite this confession, Mark has benefited from the company he's kept. Sydney’s big end of town lawyer, David Baffsky, was an early employer and a big influence.

“David was not only a great lawyer but was very creative and could think outside the norm,” he said. “And one of the great things he did for me was to encourage me to exercise my own creativity and it was something I’ve had to learn to do in my business.”

It was the 1980s, and he says he saw what to do and what not to do, with clients ranging from John Spalvins to Alan Bond to Rene Rivkin.

Later on, the big influence became Kerry Packer, when the media mogul bought into Wizard.

“He was the best listener and question-asker I have ever met,” he revealed. “You perform best when you are accountable to someone and being accountable to him was a challenge.”

Mark says young entrepreneurs often don’t understand how important it is to be accountable to those who provide the money.

“The best investor in your business is the one who holds you accountable.”

The first business encounter with Packer was memorable. In 1999, he was told to meet with Kerry in his office before the Wizard deal was sealed, which would see them as business partners.

Ushered into his office, Packer sat in a huge chair and peered at him across an oak desk.

“The seat I sat on was at least half the size of his seat, and he was like twice the height of me anyway — I felt like a midget or more so, a minion,” he explained. “I felt that in every sense: as a person, in terms of my wealth, my influence and my power. And it was all represented in the little chair he put me in.”

He admits his initial reaction was to think “f--- this” but he confessed he saw Packer as a god when it came to business.

“I know I said I don’t like being told what to do, but it depends on who is doing the telling,” he reflected. And on further reflection, he believes Packer made him do things he would never have done and it explained why GE eventually paid half a billion dollars for Wizard.

“That was to buy the wholesale business that supplied the money,” he said. “Kerry said I won’t do this deal with you unless you buy that business or secure an influential position in it.”

Mark says Packer foresaw nine years before what could happen to dependent lenders when something like a GFC comes along, and it wasn’t pretty.

On the vision thing, I asked Mark if he foresaw what Wizard would become and what Yellow Brick Road (YBR) is as a publicly listed company, supported by the likes of the millionaires’ factory — Macquarie.

He says he had a goal of a $500 million book but within five years he was doing a billion worth of loans a month! Like many entrepreneurs, he fessed up that he knew he had to create a brand but “I never knew what it would cost to build it — Channel Nine as a partner made it happen.”

In a nutshell, the Bouris game plan got down to a good, low-cost product copied from the likes of Aussie Home Loans and RAMS, which initially relied on a strategic public relations spend. Then via his network (namely, a close friendship with David Gyngell, who he trained with each morning), he connected with James Packer and the rest is history.

“The one thing I did do that the others would not do, was to dilute my equity,” he pointed out. “The lesson in this for all start-ups, who want to get scale, is that you will probably have to dilute your equity and if you won’t do that, you might never get scale.”

I concluded my chat with Mark by asking why he came again with Yellow Brick Road or YBR?

“Because I could,” he said. “When the business was sold from GE to Aussie and CBA, I was released from my restrictions and I’m like a lion in a deer park. I know how to do this. I can prepare the meal and all of sudden, I could do it again.”

He’s enjoying the challenge of adding financial planning to a loan business but he says the game is harder now as “the banks aren’t as intellectually arrogant” as they were in the 1990s, when Wizard, RAMS and Aussie took a 20% share off them!

He says being a public company restricts nimbleness and while you need regulation, it advantages the bigger players because it’s a lower relative cost across their greater revenues.

On what he has learnt after four decades of business, he said that while you can lack the energy of someone young, you can make up by ramping up the consistency and persistency.

“I never give up. I keep marching on. Success does not come overnight.”

Read: The Harvard Business Review and American Scientific. If it’s a book, it will be something on mathematics!

Eat: Healthy stuff like salads but I don’t cook at home and I don't drink much alcohol.

Sport: The Roosters. I watch them every weekend and I do boxing.

Social activity: I don’t go out and rarely do social things, apart from seeing a few friends.

Getaway: Europe, once a year. Here, my farm at the back of Byron.

Induglence: Believe it or not, it’s to spend half a day in my garden with my vegetables! My Dad is a mad gardener and we go to each others’ places and look at our vegies.