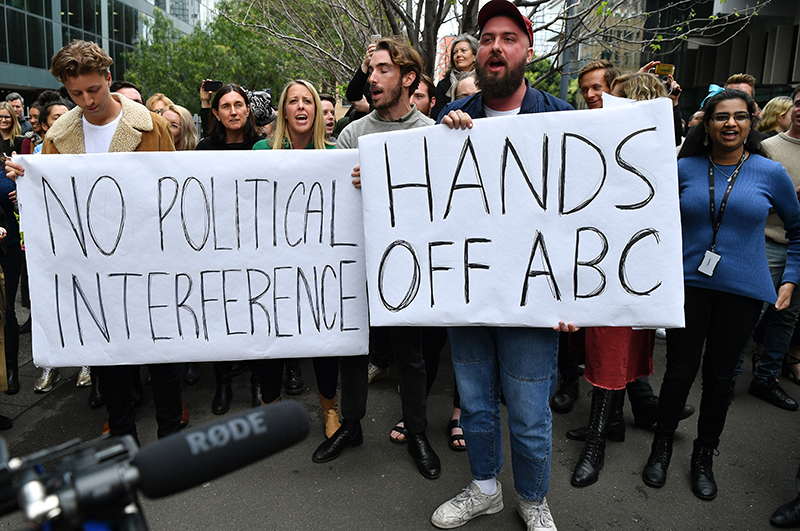 Love-v-hate: Two Emmas at the ABC

There are two Emmas associated with the ABC. One is loved and the other hated! The first is Yellow Emma of The Wiggles, who sings a great A-B-C song. And then there’s Emma Alberici and lots of members of the Government think her work stinks!

That said, Emma A would have her fans but I’m sure they wouldn’t be card-carrying members of the Liberal and National Parties!

The recently resigned Chairman of the ABC, Justin Milne, pretty well revealed how low Emma’s stocks were with the Government, with his interview with the ABC’s Leigh Sales. And the SMH today has allegedly secured a text from Mr Milne to the sacked boss of the ABC, Michelle Guthrie, which reveals what the Chairman, many in the Government and I bet a lot of Coalition supporters, thought of Ms Alberici. This text shows just how she had cheesed off the  Government: “After two glasses of red of course there's an agenda. They fricken hate her. She keeps sticking it to them with a clear bias against them. We clear her as ok. We r tarred with her brush. I just think it's simple. Get rid of her. My view is we need to save the corporation not Emma. There is no g'tee they will lose the next election [sic]."

The SMH’s Michael Koziol and Jennifer Duke indicate this was not a personal hate for Emma but more because Milne in his text was focusing on “his concerns about Alberici as chief economics correspondent.”

No-one thinks it’s easy to sack someone at the ABC — you’d have to steal Play School’s rocket clock or be a friend of Andrew Bolt and a climate change denier before that could happen!

But that has been a great thing because it meant reporters could report without fear or favour. The cost has been that leftish bias prevails in some of the network’s work but it’s the price you pay for the good stuff the ABC delivers. And as someone who tries to hate equally without bias, I know how hard that is!

In case you missed Emma’s history as chief economics correspondent, she has made a number of spectacular blues.

This is how the SMH reported the fallout of a report where she looked at big Aussie companies dodging their taxpaying responsibilities. “The ABC has identified nine errors or omissions of fact in Alberici's news story, which was called "Tax-free billions: Australia's largest companies haven't paid corporate tax in three years.” The headline was misleading, according to the broadcaster, because Australia's top five companies and most of the top 10 by market capitalisation have paid corporate tax.”

Fairfax’s Broede Carmody also threw into the story the following: “The ABC also conceded an accompanying analysis piece showed a ‘lack of impartiality’ under the organisation's editorial policies.”

I’ve known Emma for years and was surprised she was made chief economics correspondent. I could see her as the ABC’s small business correspondent as she once wrote The Penguin Small Business Book and came to fame in Nine’s Small Business Show. However, she has never been known for her economic prowess.

Watching her work on Lateline, which I reckon was always entertaining and provocative, she did look strongly anti-Coalition but it has been in power for five years and she could easily argue that she’s simply putting the government of the day under the blowtorch for good journalistic reasons. That said, I personally suspect she is a little leftish as a lot of my mates at the ABC are. But who am I to judge?

Well, I can, because (like all of us) I’m a taxpayer and I’m entitled to a view on “our ABC”. But that doesn’t mean the ABC has to change, even if I’d like it to be a little more balanced on some subjects. On the other hand, if it wasn’t unbalanced slightly to the left, then it might not have paired up with Fairfax’s Adele Ferguson to make a big push for the Royal Commission into the disappointing financial community.

It’s swings and roundabouts and this whole Michelle Guthrie, Justin Milne and Emma Alberici problem could have been avoided if Emma, after making more mistakes than any economics correspondent that I can recall, was moved into another job at the ABC. Then more people, other than Emma, would have their jobs today!

No one should be outraged about a chairman telling or indicating that a wayward employee be let go. I bet a lot of banking chairmen have done exactly that with their CEOs and, in some cases, the employee targeted for the exit was the CEO himself!

It’s called the Australian Broadcasting Corporation and I know at least one great journalist, who got nudged out because she was too right, too yuppy and too non-ABC for her own good.

Emma never deserved to be sacked for her economics work. Moving her elsewhere would have been a decent call that maybe Michelle Guthrie should have initiated.

And when it comes to Andrew Probyn, the ABC’s political editor, and the allegation that the Chair and the Government wanted him out, if that’s true, that would be overstepping the mark. He looks leftish leaning but he could be just putting the government of the day under the pump, as Richard Carleton, Paul Lyneham and, of course, Kerry O’Brien did.

I always say to my mates who whinge about the ABC’s bias: “If you don’t like it, don’t watch it.”

And when they complain about the misuse of their taxes, I ask them: “What’s new? Politicians not spending our taxes as we would like them — it goes with the patch. However, that’s not just because politicians are inept or gutless, and too many are like that, it’s because we Aussies are so damn different and we have different views on what is and isn’t important.