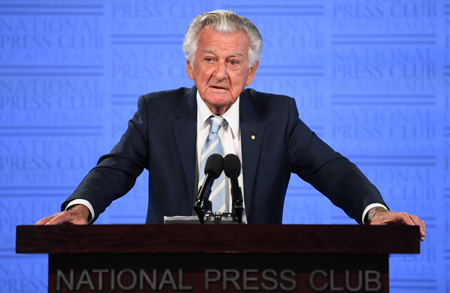 Love Bob Hawke but his economics on the same sex survey is crap!

I’m a great fan of Bob Hawke’s best work but his singling out of the snail mail same-sex marriage survey as “without question, the worst economic decision made by any Prime Minister” is plainly wrong.

Now I’m not going to be an ageist as to suggest dotage has driven Bob’s comments about Malcolm Turnbull’s “worst economic decision” by a PM from Oz but let’s explain it in terms of how good he has always been at getting public relations exposure for his mate and ex-fellow MP, Gareth Evan and the latter’s book — Incorrigible Optimist — A Political Memoir.

See, he’s even successfully exploited me for free publicity!

There are two ways I can prove Bob wrong by having a better memory, by more careful analysis and by not having one eye.

First, I can recall a worse policy or two. For starters, let’s look at a couple Bob was responsible for.

In 1985, Bob sunk Paul Keating’s tax plan purely for political purposes and Paul’s consumption tax was ditched for a pile of income taxes. This was pure politics versus better economics. Today, the biggest complaint about our tax system is that it slugs income more than many comparative countries, while our GST at 10% is one of the lowest in the world on a relative comparative basis.

Another? How about allowing his Treasurer and Reserve Bank let home loan interest rates get to 17-18%. In those days, Treasurers controlled central banks and PMs controlled Treasurers. Keating has copped the blame because he also copped a lot of the praise but, in reality, Bob Hawke had to be an accessory to a policy that helped create our last recession. Who was the PM most in charge when that recession came along? Well, that would be Bob Hawke!

Don’t get me wrong. The Hawke Government was one of the best reforming governments of all time and I have enormous praise for both Hawke and Keating for their smart and courageous reforms. The Accord and how it eventually recruited the ACTU’s Bill Kelty to sell enterprise bargaining and productivity-linked wage rises was top policy stuff.

If I started on the good stuff, I’d be here for hours but let’s move on.

Now let’s look at the $122 million ‘invested’ in the same-sex marriage survey. Sure, a vote in Parliament would have saved the money but, as Bob knows, no government easily ignores the political consequences of giving the nod to something that can be divisive.

As an economist, I know if the vote gets up, as I expect, the politicians will have to rubber stamp it and then the economic multiplier will take off!

I see an explosion of marriages and most of us know how much money is spent when these shindigs are put on. And based on knowledge about my gay friends, they’re not exactly the “let’s do it on the cheap” types.

In economics we argue that an exogenous or ‘out of nowhere’ shock of spending leads to a multiplier effect but, in the real world, we know it as a marriage leads to demand for venues, food, drink, music, photographers, cars, etc. And then all these businesses demand more stuff and those businesses in turn demand stuff that along the way creates new jobs, new spending by those who get jobs and others who get more income from the initial injection of spending.

The interesting part to this story is that I’ve argued that Bob has been the best qualified economist/PM in my lifetime and he knows crap economics when he sees it but I know he’s been the best PR PM ever!