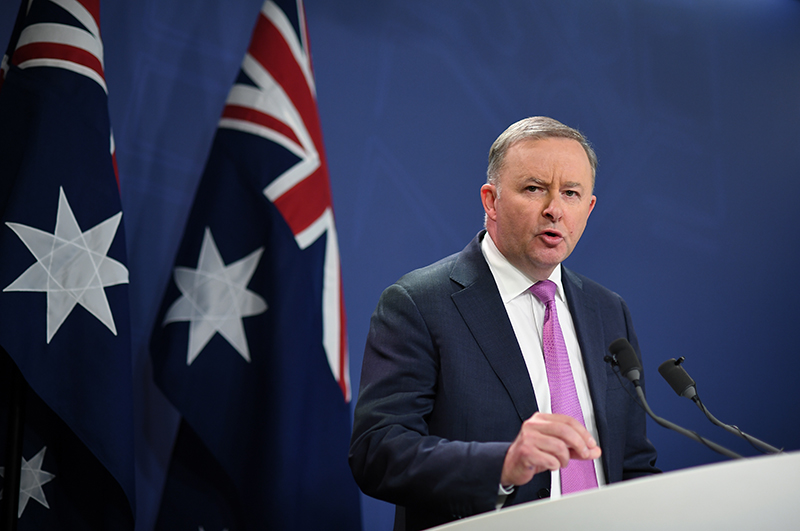 Listen up Albo - lessons from the election economic rebound!

It’s official: it’s ScoMo versus Albo at a time when the economy is under challenge. But it has been given a substantial whiff of hope with what I call the ScoMo rebound.

And there’s a strong message in this for Albo and anyone who aspires to leadership of a business, team or family. As the lawyer in that great film The Castle put it so aptly: “It’s the vibe.”

How else can you explain the turnaround of those things economic?

Since the election, the auction clearance rate has spiked. As the AFR reported: “Sydney posted preliminary auction clearance rates of 69.9 per cent – according to Corelogic – and will likely achieve its best final clearance result for the year, in the low 60 per cent range after adjusting for slippage of between 5 to 6 percentage points next week.”

If you need to see this graphically, here’s a chart from Core Logic on auction clearance rates — note the kick.

The makings of a rebound were on the way but the election win has bred optimism, which should show up in consumer and business confidence in coming weeks. Leadership can do that. It fell during our revolving door challenges from Prime Ministers Rudd to Gillard to Rudd to Abbott to Turnbull to Morrison. But when the change was seen as a plus, confidence spiked.

The Morrison win and confidence surge has shown up in the local stock market — Westpac shares went up over 10% last week, while the S&P/ASX 200 Index rose, defying the negative Trump tweets that sent US stocks down for the week.

Weekend newspapers pointed to property developers revisiting projects that had been shelved and retail stocks have made a comeback with JB-HiFi up 9%.

Sure, this is very short-term stuff and it has to translate into improving economic data but it’s also a direct response to the negative vibes that Bill Shorten built into his well-meant policies for other Australians. The people who invest, hire people, create goods and services and drive growth were worried by Bill and in a capitalist economy, you can’t scare the goods and services and job-makers. Albo has to learn that and more importantly show that he believes it.

Bob Hawke got it. So did Paul Keating, though at times Paul could go feral and anti-business. He only became PM in his own right because Dr. John Hewson  honestly went to the people with a 15% GST. That said, John, who’s a mate, never had the vibe then that voters love. He does nowadays, which shows people can improve. Albo has to embrace change, if he is to challenge ScoMo in three years’ time.

In case you missed it, this was my take in Weekend Switzer on what else Albo has to learn from Labor’s defeat on May 18. It was headlined: Labor’s lessons from Saturday’s butt-kicking. Albo please note!

Stunned! That was me on Saturday night and only Bill and Chloe Shorten and the entire Labor team could have topped me. I’m a risk averse investor — that’s why I set up my listed dividend growth fund that pays reliable income with the ticker code SWTZ, which is my nickname.

When I get invited to the races, I bet for the place and I back the favourites because favourites have an unhappy knack of losing but they often run a place. The form via Newspoll said you can’t back the Coalition for the win, though on a Bill versus ScoMo basis, the preferred PM rating told you another story. It was a pity that the ABC breakfast programme told us on Monday that no Opposition Leader who was relatively unpopular to his government rival has ever taken out a Federal election. If I knew that before Saturday night, I would’ve been telling plenty of hopeful Coalition voters in my daily columns, and worried small business owners, panicking self-funded retirees, who love their franking credits, and spooked homeowners, (who didn’t want to see more house price falls) might have slept better over the past few months.

I might have even backed the Coalition, despite my overly-cautious punter ways, if I’d known that history has said that an unpopular Opposition Leader, with no form, wasn’t worth backing.

When I interviewed ex-Labor Senator Graham Richardson at our Switzer Investor Strategy Day in Sydney, Melbourne and Brisbane (that attracted over 2,000 worried investors), I asked him if worried small business owners, retirees, home owners and farming regions (who are always fearing Labor), would add up to a lot of people who’d vote against Bill’s hard-nosed policies?

I also wondered whether family members worried about their parents and grandparents, as self-funded retirees losing a chunk of money, would vote to support their loved ones? They might have also agreed with one of my early stories that was headlined “Bill will shrink your inheritance!”

Then there might have been employees of small businesses, banks, insurance companies, miners and others who thought Labor might make tough business conditions even tougher, so they thought it was better to vote against them to shore up their jobs. I reckon people working in real estate and mortgage broking would’ve found it hard to vote Labor, unless they were smoking something.

A psychiatrist friend of ours, who started his life in a fibro housing commission home, reckons we Aussies don’t relate naturally to Bill’s references to us as “workers”. It’s so old world and he says we’re a whole lot more aspirational than say those in Australia in the 1950s, ‘60s and ‘70s.

Ironically, Bob Hawke and Paul Keating unleashed the hounds of deregulation and opened us up to globalisation, the Internet and freer trade and business. And because of these changes, we have changed.

We drive imported cars now. We’d like an investment property to reduce our tax bill and add to our great compulsory super, which will create millionaires out of the younger workers of today. We all holiday overseas and we can stream live out of the USA, such as Game of Thrones and Billions. Bill was talking to a shrinking minority and, in fact, he alienated older retirees, who might still think of themselves as workers. They might think like that because that’s what they were when they scrimped and saved to pay off their house and maybe bought a weekender on the coast before trendies started chasing them.

These people often had little super because they did not have compulsory super that started in 1992, but in their 50s (after they got rid of their kids), they turbo-charged their super so they’d have a nest egg in retirement. And it was this that Bill held up as a sign that they were ripping off workers and taxpayers of today!

The masterminds of Labor’s policies are out of touch with the majority of Aussies and the fact that they’re blaming Coalition scare tactics of talk about a “retirees’ tax” shows that these people live in La La Land and not Australia!

Graham Richardson, who knows us and has been an astute strategist, told my audience that “they should be scared of Bill, because he is scary.” He called the negative gearing and franking credits policies “dumb” and they were. Anthony Albanese has to learn from Bill’s mistakes.

Albo has promised to go on a listening tour around the country, which is a good idea as politicians and men in general aren’t great listeners. We’d love to hire a female financial planner because we know they’re renowned as great listeners to clients but anti-discrimination laws stop us from specifying that we want one.

I believe there are a lot of voters who aren’t too fussed about the new age politically correct rules that stop them via shouting them down and shaming them whenever they disagree with modern day protocols.

On Saturday night, the silent majority did make their point loudly to Labor and I hope for their and our sake they get the message.

I have one piece of advice for Albo, who does look like a good bloke, which is a start. I recommend he puts away a few weeks to shadow a number of small business owners — be an undercover pollie in a business — to actually see what it’s like to employ and lead people, have your house on the line, deal with cranky customers, bullying big business, annoying public servant demands for data, deal with digitally disrupting rivals, who don’t pay the same wage levels and dodge tax like world-beaters and struggle with the threat from a potential government that wages have to go higher!

Before the election, Labor kept walking in the shoes of the people they know but had no idea how uncomfortable it is for those who voted against them.

Get uncomfortable Albo and you might get some comforting news in three or six year’s time.