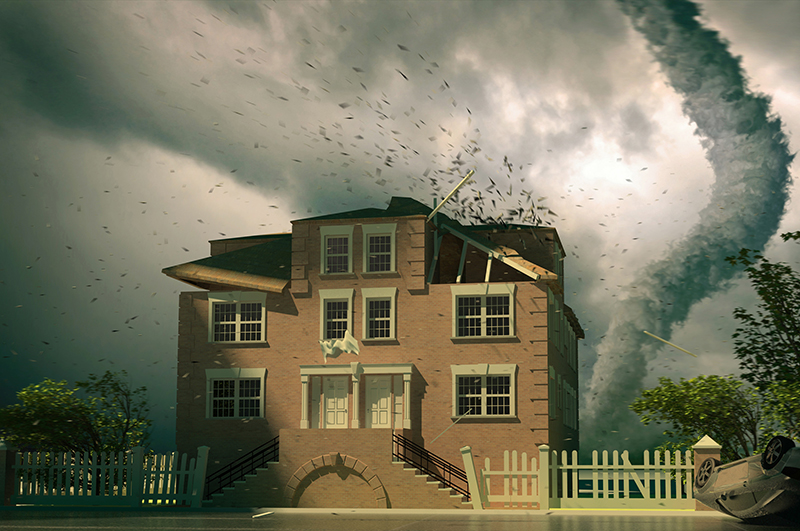 Let's get real: Is Hurricane Housing on its way?

It’s freaky Friday when I cop a barrage of insults on twitter from the Armageddon Army, who firmly believes that fire and brimstone is heading our way when it comes to house prices. I don’t know if this is a coincidence but the tsunami of taunts and reckless ridicule seems to build up to a crucifying crescendo around 6pm on the last working day of the week for most.

I have wondered if the vitriol towards my more measured views on what happens to house prices is somehow linked to the country’s happy hour, which seems to create a lot of unhappy economics commentators.

In a nutshell, (and I use the word ‘nut’ without any hidden meaning meanness), I don’t think we’re in line for a 40% house price collapse, which featured in a 60 Minutes piece a few weeks back. This was picked up by sensationalist media outlets and lots of people were spooked by the headline.

To ensure that consumers don’t get too scared, I’ve attempted on my TV show, my radio segments and on this website as well as on programmes such as Weekend Sunrise and the Sky News breakfast show, to explain that a lot of credible experts are not fearing Armageddon for house prices.

They see substantial falls but these aren’t so scary compared to the big rises in prices in Sydney and Melbourne. This chart actually shows how significant the house price falls have been over the past 12 months. 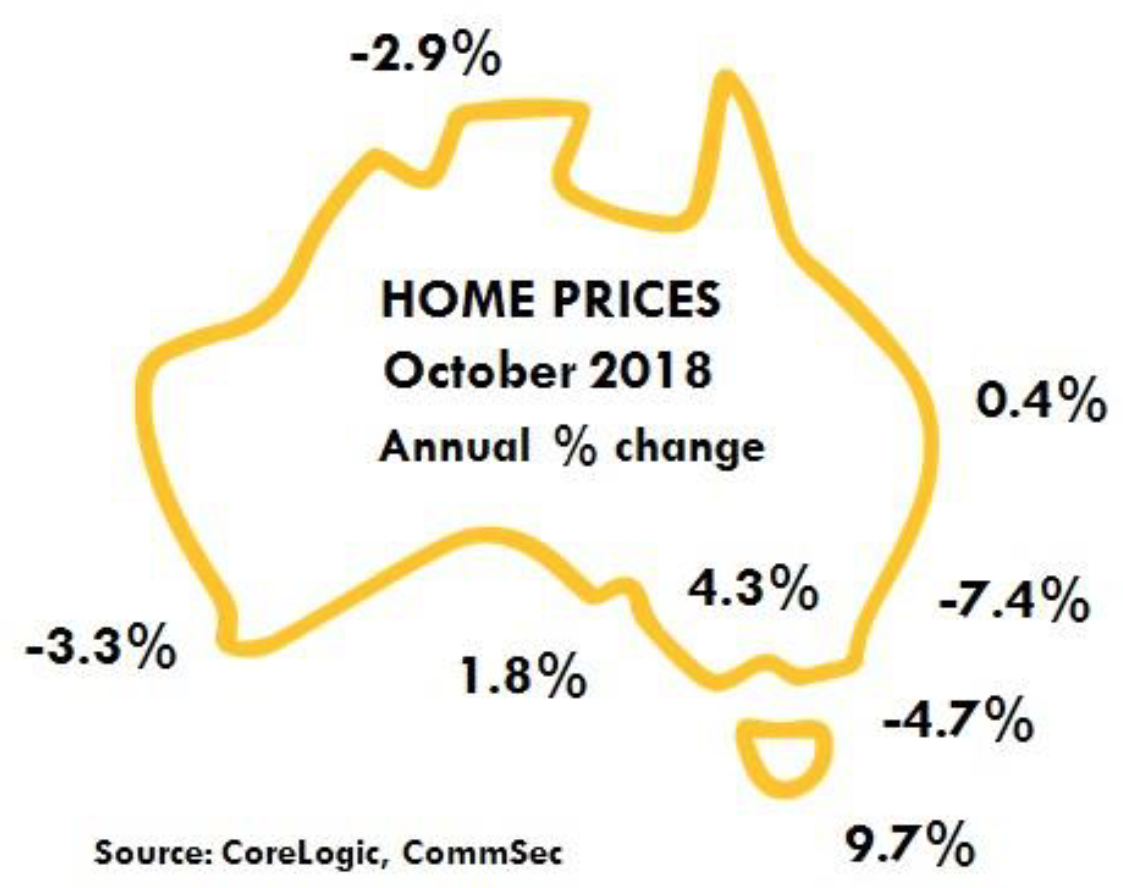 As you can see, Sydney is down 7.4% across the city, while Melbourne is down only 4.7% but certainly some suburbs have fallen more, while others less, which explains the 4.7% figure in the Windy City.

But I think the next US recession is more likely in 2020 or maybe 2021 and the stock market will keep rising, with volatile ups and downs for a year or so. That helps me believe that house prices here will fall but not collapse.

And this week’s economic data makes me even more supportive of my measured view on house prices. In case you missed it, let me recap:

• The monthly Westpac/Melbourne Institute survey of consumer sentiment index rose by 2.8% to a reading of 104.3 in November. The sentiment index is above its long-term average of 101.5 and any number above 100 says optimistic consumers outnumber pessimistic ones.

• The NAB business conditions reading, which tells us how businesses are feeling right now about how well their business is going, eased from +14 points to +12 points in October but the long-term average number is only 6! This is a very positive reading of how business is thinking about the economy as it affects them now.

This follows the Reserve Bank telling us that it’s pointy-headed figuring says we grow at 3.75% this year and next! If they were tipping low growth and rising unemployment, I’d be on the side of my Freaky Friday ‘friends’ but the Big Bank is more positive than me! And that’s saying something.

What about the stock market? Could it be the trigger for an economic slump and house price collapse? Well, Citi keeps tags on certain indicators and before the dotcom crash, 17.5 out of 18 indicators said a crash was coming. Before the GFC, it was 13 out of 18 but if the debt rating agencies had been more frank about collateral debt obligations, maybe the number might have been 15/18, which would have been ‘red light’ flashing time for people like me, central banks and chief economists, who were hoodwinked.

The latest Citi score in July was 3/18. I’m trying to get the latest but I’d be surprised if it’s more than 5/18, with Trump’s trade war and rising US interest rates possibly adding some negatives that encourage bears to head towards stock markets.

Just to ensure that if I’m not kidding myself, I checked out some respected economists and property experts to see what they think about Sydney house prices going forward. Here’s what they told me on Thursday.

Craig James, chief economist at CommSec said: “The fall so far is 8.2%, after rising almost 75%, so perhaps there’ll be a decline of 10-12%, before going sideways for a time.”

Economist Marcel Thielan from Capital Economics gave me a nice summary of what this respected economics outfit is thinking about our house prices: “We don’t currently have forecasts for house prices at the city level, but I’d like to make a few observations,” he said. “We are forecasting a 12% fall in house prices across the eight capital cities from their peak.

“We estimated last year that house prices in Sydney are more overvalued than in any other capital city. Prices in Sydney have now fallen by 9% from their peak but we estimate that they are still 25% overvalued. That suggests that prices will fall more sharply in Sydney than elsewhere.

“Our sales-to-listings ratio for Sydney has rebounded a little in recent months (see chart below) but I suspect it will fall again soon. That’s because we only have reliable sales data until July, as it takes time for registrations to take place. But we already know that new listings have surged by 30% since July, so unless sales also jump by at least 30%, the ratio will fall again. At current levels, the ratio suggests that prices will keep falling for a while yet. So by early next year prices will probably have fallen by more than 10% and I’d expect them to eventually fall by at least 15%.”