There is no universally accepted definition of a housing bubble in economics. Investopedia did its best but have a look at it: “A run-up in housing prices fuelled by demand, speculation and the belief that recent history is an infallible forecast of the future. Housing bubbles usually start with an increase in demand in the face of limited supply, which takes a relatively long period of time to replenish and increase. Speculators enter the market, believing that profits can be made through short-term buying and selling. This further drives demand. At some point, demand decreases or stagnates at the same time supply increases, resulting in a sharp drop in prices - and the bubble bursts.”

House price rises in other capital cities have been OK but it’s Sydney where the Reserve Bank has a right to worry, but not panic. The biggest threat to this housing boom is economic growth. If we head into recession, as some “clowns” have predicted (to quote Treasurer Joe Hockey) then this boom will bust. However, after studying Sydney house prices over a long period, I found that they do stop rising, and can fall, but they don’t fall below where they started from. Even through our worst recession in recent times in 1990, house prices did not collapse.

Often when the stock market crashes there is a flight to quality and real estate is seen as that.

This chart shows why Sydney is in the spotlight for property prices: 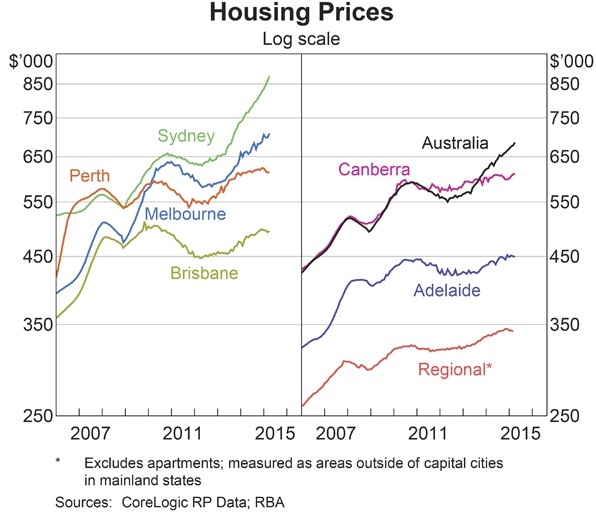 That said, we were like everyone else until 2013 and, later on, I’ll show you that before that time Sydney had really suffered house-price wise.

Our Assistant Treasurer Josh Frydenberg  (despite the views of the Treasury Secretary John Fraser, who’s worried about a potential bubble), doesn’t agree with the bubble thesis. As he pointed out on the ABC:
“In the early 2000s, housing prices increased by 20% for three years in a row and then were steady for a decade. And there wasn't a bubble that led to a major correction."

Fraser’s position really worries me because he seems to be too worried about investors. I never hear Treasury bosses worrying about investors in the stock market so what’s so special about property when it comes to investors? If investors got burnt, possibly first home buyers could then buy at lower prices. He should be more worried about getting the economy growing because that’s the biggest threat to the housing boom in Sydney (or bubble as he wants to call it).

"When you look at the housing price bubble evidence, it's unequivocally the case in Sydney, unequivocal," Mr Fraser said. "It does worry me that the historically low level of interest rates are encouraging people to perhaps over-invest in housing."

But let me remind you that Mr Fraser is nothing more than an economist with an opinion and economists often get it wrong. Economics is a social science, not a real science, and I say this as someone who taught economics at the University of New South Wales for over 13 years.

The Reserve Bank assistant governor, Malcolm Edey, is less certain about the bubble theory. "I know that a lot of people do think it's a bubble,” he said recently. "Serious people think that. And we agree that this is a situation where the market is strong, it's over-heated, it's a risky situation. Some people call that a bubble."

He clearly doesn’t want to say Fraser is wrong but it was no statement of support either.

Frydenberg argues the increases in house prices were due to population growth, the lack of land releases, foreign investment from the likes of the Chinese and I’d throw in the rise of self-managed super funds (SMSFs).

During the week, Prime Minister Abbott was bagged in Parliament for supporting higher prices for housing in Sydney. "As someone who, along with the bank, owns a house in Sydney I do hope our housing prices are increasing,” he said. "I want housing to be affordable but nevertheless, I also want house prices to be modestly increasing."

Mr Shorten responded that Mr Abbott was out of touch. I think he’s in touch with anyone who owns a house in Sydney.

Where were John Fraser and Bill Shorten when Sydneysiders were clobbered by being long property up to 2013? Have a look at the chart below:

The average rise in Sydney was a poor 2.5%. I say this is catch up time for the capital of New South Wales. Sure, some people will buy at the top of the market (like many would have in the early 2000s) then cop lower prices if they were desperate to sell. Alternatively, they might not even have known that the house they bought for $1 million was only sellable at $900,000 because they weren’t sellers!

Who are we trying to protect with this bubble talk? Investors? Investors win some and lose some. I don’t mind the Australian Prudential Regulation Authority (APRA) telling banks to ease up on loans to investors, as they are right now, but let’s not go on a handwringing crusade for grown ups who should be able to work out whether they’re paying too much for a house.

I suspect rate cuts are over and interest rates will rise in 2016, when economic growth picks up, as the dollar falls and the US starts raising interest rates. This housing bubble talk is only a problem if economic growth stalls or the “clowns” end up being right and we go into recession. But then all house prices will fall and if you lose your job, you could be really KO’d by a real estate slump.

It’s the job of government, the RBA and people like Josh Frydenberg, John Fraser and Bill Shorten to talk up the economy and believe that the banks, which rely on their customers being able to service their loans, aren’t a bunch of nincompoops.

Finally, why should the rest of Australia be punished because of Sydney, when house prices in other capital cities are only OK?

I’m sick of commentators trying to get column inches by running with the housing bubble argument. To them, I say, be careful of what you wish for, you short-sighted, attention-seeking threats to our economy!

And anyone who thinks I’m pissed off about this bubble talk would be absolutely on the money.