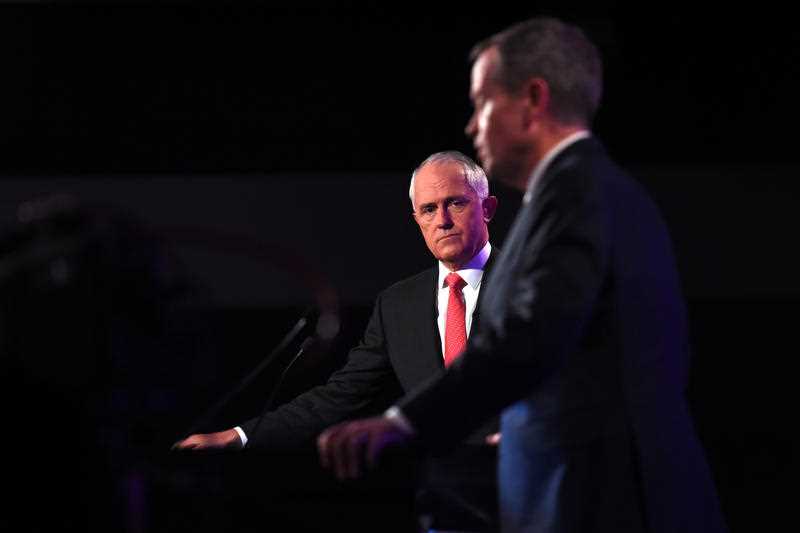 He goes on to say that info-wise, it offered even less. And it comes as the Seven News/Reachtel poll out two days ago found that Labor has surged to the lead on a two-party preferred basis, at 52 plays 48!

This result comes as 29.2% of voters surveyed said economic management is the most important issue, double any other one.

But maybe that’s the problem for Australia. We’re looking for the wrong thing. I don’t write this easily, given the fact that nearly three in 10 voters think what I’ve been trained in and what I do speeches on and report on in the media is seen as the most important. However, it’s not.

What’s even more important than economics and how it affects our lives is leadership. Yep, the one thing we all can agree hasn’t turned up to the leaders’ debate in spades has been a great leader and the smell of quality, charismatic leadership.

I don’t write this easily either, as I’ve known Malcolm Turnbull since I was 20 and Bill Shorten was once asked by his wife “What’s Peter Switzer like?” and he said: “I think he’s his own man”, implying that he didn’t think I was politically blinkered or influenced by anyone.

How do I know this? He told me when we met in an airline lounge just after he became leader, so I’d like to say he looks like a great leader but he doesn’t.

They both look sincere but not overwhelmingly convincing. Malcolm’s message of jobs and growth is a good one but those who don’t understand their basic importance to fixing the Budget see his mantra as a slogan.

Bill, on the other hand, is talking economic restraint but he keeps finding more money for good causes. That worries me a little.

Meanwhile, Opposition Treasurer, Chris Bowen is looking the goods (especially without that damn beard) but Labor’s track record as money managers is not great. That said, Bowen has been ahead on points versus my old economics student, Scott Morrison, but I scored it a draw on their Thursday debate.

Bowen has had much more time in politics linked to Treasury but Scott is a fast learner. I still hope he changes that $500,000 lifetime limit on non-concessional contributions for super before the election. And a smart leader would tweak that silly vote-killing, anti-super-building decision.

By the way, we’re not the only ones who’ve noticed our leadership problems that have come since we lost a great leader in John Howard.

(I never saw Howard that way, pre-PM, and his win was a surprise but he grew as a leader in the job. I now work with him once a year and I like him. Given the response when he walks around the country, a lot of people seem to miss him.)

It went on to point out that Tony Abbott was the second PM “to be unseated by an internal political coup in two years.”

Over five years, the count is three PMs who’ve been garrotted — Rudd, Gillard then Abbott. It’s the basis of a Shakespearian play but, unfortunately, the lead actors aren’t great leaders. That, in part, explains why we’ve had a procession of departing head honchos.

The WSJ pointed to Tony Abbott’s view on why he was axed. “The scrutiny placed on politicians by a 24-hour news cycle amplified by social media, as well as on a factor many political observers also highlight: brief, three-year election cycles that lead lawmakers to obsess over voter opinion polls.”

There’s a bit of truth in that and that’s why PMs have to be great leaders. The AFR’s Laura Tingle asked a pertinent question last night when she basically asked Turnbull: What happened to the old Malcolm? You know, the leather jacket Malcolm, cool on the ABC, a climate believer, a reasonable Renaissance man, who, as a former investment banker, should be able to sort out our financial mess. He was the man with an economic plan, which he talked about when he challenged Tony Abbott last year, and it was then when he referred to 30 Newspolls in a row that the Government had been clobbered in.

Where has this man gone? Well, history has shown me that being the country’s leader is a tough job. Kevin Rudd looked great pre-election and then became as popular as Donald Trump at an affirmative action meeting. Julia Gillard was a smart Education Minister (even Alan Jones of 2GB liked her) but as PM she was shown the door by her own team.

And Tony Abbott has always been a winning politician/Minister but he looked like a loser as a PM and was treated that way, again by his own party.

By the way, Paul Keating was a gutsy leader as a Treasurer and people followed him but as a PM he only got one term from the people and he only got that because John Hewson tried to sell a 15% GST.

Successful, long-serving leaders like Bob Hawke and John Howard have to be special leaders, but they have to have a great team around them as well. I don’t think Turnbull and Morrison, as well as Shorten and Bowen, have reached the Hawke-Keating or Howard-Costello standard. And that’s the real reason the election looks like a close run thing.

American author John Maxwell, who wrote the great 21 Irrefutable Laws of Leadership, told me a few years back: “If you think you are a leader and you look behind you and no one’s following you, then you are not a leader. You’re just going for a walk!”

The beauty of this long election campaign might be that both Malcolm and Bill might learn something about being a leader but I suspect, whoever wins, might have to learn it on the job.

And what about the important economic management issue for voters that covers growth, jobs and fixing the deficit/debt problems? A great leader would know this is a high priority and their dialogue to their followers would give them confidence that this would be addressed as a high priority.

Leaders nail the big issues and that’s a big part of the reason why they get the top jobs.