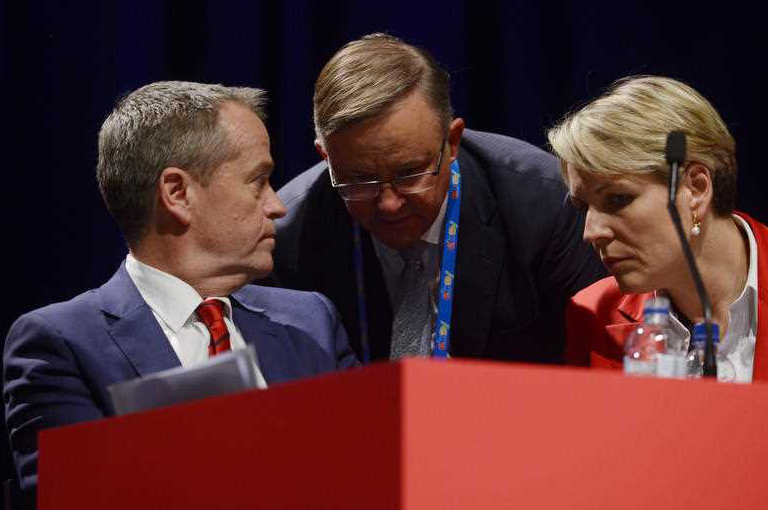 Labor and Bill Shorten need to help the economy first, not refugees!

I’m sick of the soapy called Australian politics and it follows a weekend of seeing too much coverage of the ALP conference, where the two big issues were:

The first issue is important for Labor and the country to sort out and so is the second. However what we see with a conference like this is that those people running Labor aren’t excessively committed to what we care about.

Just think about the big issues in our lives for a moment. If I had to put them out there (and I do have to for this article I’m writing), this is what I’d say should be of maximum priority:

First, get the economy growing so we can get unemployment down, especially for our youth where unemployment is around 14% while overall unemployment hovers round the 6% mark. A recent paper by Honorary Professor of the Industrial Relations Research Centre at the UNSW, Raja Junankar, argued this was not because of high wages, because youth wages have been falling compared to adult wages. So if he’s right, what’s a future Labor Government going to do to solve the problem? The Coalition clearly should have a solution too but if Shorten wants to be relevant, he should be talking about how he’ll solve this big problem.

Second, the ALP conference over the weekend should have addressed one of Labor’s greatest issues that stops swinging voters changing their votes. It’s related to the first policy area that Labor has to tackle. Professor Junankar says youth unemployment is more linked to the business cycle, with part-timers, casuals and last-in employees often being the first out in a downturn. Recent Labor governments don’t have a great reputation of working with business, while the Hawke-Keating years were characterised by governments that were more business-friendly.

It’s no coincidence that the most recent Federal Budget was pro-small business and we now see business confidence hit a 21-month high, with this labour market improvement even surprising the RBA Governor Glenn Stevens. He made this admission in a speech last week!

Third, what is Labor’s plan to reduce the deficit and debt over time? Did they cover this and I missed it? I think growth helps solve both of these problems as it brings higher tax revenue, more jobs and less need for spending. And remember, we do have to see more infrastructure spending on things like a second airport for Sydney and better roads to kill these traffic snarls in our capital cities.

Fourth, have Labor politicians noticed that house prices in Sydney and Melbourne are a little high? I’d say a median house price in Sydney of a million dollars screams out the news that we need more supply. Did you know that the multi-governments’ slug on building a new home can be in the 40-50% region? This easy taxing put on developers, which gets passed onto homebuyers, is hurting supply and no government ever gets serious about it! Why? They need the money and that’s why economic growth is essential — it might provide governments with the revenue to make it easier to stop slugging new home construction.

Fifth, if you get the economic growth powered by a confident business sector and unemployment then falls, our governments of the future are in a position to deal with important social issues. For example, getting disabled Australians into work. Furthermore, because the economy is strong, you might not only want to help refugees find a home here, you’d actually need them as employees.

Sixth, an enlightened future government needs to recognise that the handling of the Muslim-related issues in this country hasn’t been handled with world’s best practice. It would be naïve for any government to take the lone wolf terrorist threat too complacently, so we have to be vigilant. However, all our governments need to be more visibly engaging Muslim groups, who are horrified at the behaviour of some of their fellow-religious colleagues. The country has to see that, as a group, Muslims want to weed out threats to our country and threats to their own peaceful life in Australia. Future national governments need to address the concerns of all Australians that we are heading in the right direction with this simmering problem.

As you can see, economic growth and the money it provides (along with the confidence it generates) is a big part of the solution of many of our problems. When Bill Shorten starts talking about how Labor will get growth happening and it sounds credible, that’s when voters will start listening.
Tony Abbott is only marginally more popular and he fails to connect with lots of Australians on a social level but his attention to economic growth issues is a big plus for him and his government. Imagine if he had an ounce of charisma?

Bill Shorten also has a charisma problem and that’s why he needs to have no problems with his policies. It’s a credibility thing.

By the way, if Abbott and his team had gone for growth in their first Budget, we would be growing more quickly now, unemployment would be lower, the deficit would be smaller, debt repair would be further along the way to an acceptable position and Tony would be miles more popular.

Politicians underestimate growth, at their peril.