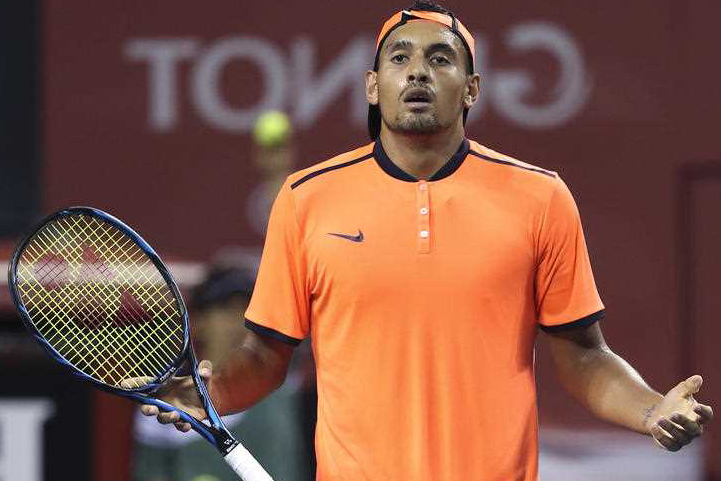 In light of the latest brat-like Nick Kyrgios behavior in Shanghai, and following my interview last night with former federal Labor MP, Stephen Loosely, it’s clear we have a worldwide leadership problem.

In the second round of the Shanghai Open, Kyrgios was easily beaten by a virtually unknown player. It appeared that this potentially great Australian player didn’t try to win and when asked how he had disappointed his fans, he virtually said he didn’t care.

The International Tennis Federation needs to fix Kyrgios once and for all — suspend him from tennis for a year and see if he learns to respect the paying public that bankrolls his prize money. This guy is a great hitter of the ball but not a great player and is an embarrassment to his family and country.

Seeing Donald Trump exposed for the real man he is over the weekend when talking about using his star power to grope impressionable women, shows you what kind of leader he is. And it can’t possibly be one who Americans want to represent them.

Let’s face it, the Democrats showing in recent years has been so average that a drover’s dog could win the US election! Everyone knows a dog is not only man’s best friend (if you leave out a hound’s inclination to pee everywhere), their loyalty, love and respect are lessons for a high-achieving disgrace like Trump.

If the US makes him their President, it proves my point about how bad leadership in the States has been.

Right now, the jury is out on Malcolm Turnbull, as he pussyfoots over issues such as the plebiscite on same-sex marriage. I don’t want to get into the ins and out on the subject, but I do think the PM needs to show some public guts and he needs to talk to us. I’d advise him to stop debating the clowns in Canberra, who are struggling for our respect after years of ordinary performances, and start talking to us.

If anyone wants to see leadership from a political leader, have a look at this video of John Keys, the Kiwi PM, who was berating his political opponents who were against sending troops to Iraq.

He deserved an All Blacks cap for that gutsy effort and wasn’t it inspirational? Imagine how our respect for Malcolm would rise if he could talk to Labor and us like that?

It’s no surprise that Kyrgios doesn’t have a tennis coach. Only recently, after the Japan Open that he won, he said he wasn’t looking for one. That said, he did credit his better form to his new ‘strength’ coach Martin Skinner, so with some good leadership from the ITF or his family (or maybe Lleyton Hewitt, his Davis Cup coach), he might see the light.

As a tennis fan, who pays a lot to go to the Australian Open (I’ve done so for about 15 years), I’m prepared to go this year without Kyrgios, if the ITF has the guts to ban the brat for his own sake.

Kyrgios isn’t even growing himself. He’s just a great ball hitter. Trump only cares abut himself but he’s not growing as a whole human being and could never be good for growing a country. And Malcolm could grow others, but he’s playing a too-insular game. He’s probably still trying to grow himself. The big, national public connection piece, which Hawke and Howard could do in their sleep, is still outside his comfort zone. I hope he gets there.

Kyrgios needs a ban and a coach. The ITF needs to show guts here. Malcolm needs a wise adviser on the Australians he’s leading — John Howard should be recruited. Someone close to Malcolm needs to step up there. I like Malcolm and I’ve known him for 40 years, so I guess I’m showing a bit of guts in being so brutally honest.

Don’t forget to check out the John Keys video and get some guts!