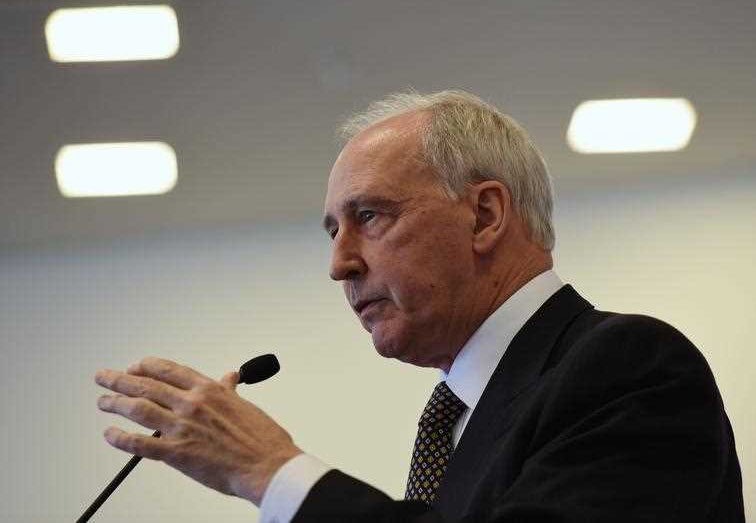 Keating is not the Messiah, he's just a naughty commentator!

I know there are many who think Paul Keating is a messiah-like figure nowadays. However, with apologies to Monty Python’s Life of Brian, I think, he’s a very naughty commentator.

As a ‘live’ politician, Paul Keating never really had a nickname but he certainly doled out plenty to his rivals. Poor old Andrew Peacock was compared to a “soufflé” (that never rises twice) and there were a lot less subtle ones! I’ll avoid being an accessory to insults by remembering others.

However, as a retired politician, he should be called “The Slammer”. Of course, he’s always been a slammer – simply google his name and the SMH, which carried his story yesterday on the GST, brought: “Paul Keating slams a bigger GST…” and “Paul Keating slams Art Gallery...”. In other stories he “blames”, “pushes” and “challenges”. But really, in all cases, he’s slamming someone he thinks is wrong and definitely not as smart as he is.

I have to confess, I learnt a lot of real world economics from Keating’s time as Treasurer. I was teaching at the University of New South Wales when he was Treasurer. One of my students was the current Treasurer, Scott Morrison. But that’s just by the by.

Of course, I learnt a lot more about the real world and the economy by growing a business that employs more than 50 people. I understood why someone like Keating believed in an indirect tax, such as a GST, when he recommended such a tax in 1985 that was rejected by his own party.

Dr. John Hewson taught everyone a lot more about tax reform. A lot of his Fightback! measures (which brought him undone at the hands of Keating and Mike Willisee, with his question about the GST and a cake, ahead of the 1993 election), have since been introduced by succeeding governments. So they were good policies but unsellable at the time.

So when you see Keating slam a 15% GST on everything, you have to ask is this Keating the economic realist who made Australia economically grow up or is it Keating, a senior of the ALP trying to help out someone like Billy Shorten?

Let’s look at his main slamming to see if he retains his economic toughness, which defined him as one of our best Treasurers, despite his mistakes on interest rates ahead of the 1990 recession.

First up, he calls the jump in the tax from 10% to 15% as “fiscal folly” and “tax penury”. He says it would reward foreign shareholders (via a lower company tax rate), it doesn’t lead to any behavioural change and would end up being a 20% tax like much of Europe.

He says a 2% rise to fund something special, such as hospitals, could be acceptable but told voters not to trust any GST increases being pedaled by politicians.

If the Turnbull Government raises the GST, it could raise about $33 billion. Then it has to be divided up between the States, tax cuts for us and tax cuts for companies. Then we have to have something left to pay off some of our GFC-created debt and some of Labor’s “please love us” debt over the Gillard years. And then the Coalition’s debt, as it struggled with a slowing economy as the mining boom’s booty disappeared.

How do you do it? Well, all the experts – economists, Treasury officials, RBA heavyweights and tax specialists (all the types of people Keating was advised by when he was Treasurer) – say raise the GST but cut income taxes.

Labor believed in compensation for poorer Australians with the carbon tax. I didn’t see the slammer doing any slamming then!

This Keating critique ignores the one big lesson he taught me: when it comes to getting Australians to buy something really hard and outside their comfort zone, you have to sell it very well and you don’t criticise a political proposal until you see all the details.

Turnbull and Morrison can’t just come up with a GST of 15% – it has to have a lot of other moving parts. There’ll be tax cuts, the end of some silly taxes and, maybe, some changes to entitlements and tax concessions. These will be calculated by people Keating used to work with, to bring off the double play of raising more revenue to pay for hospitals, education, welfare and debt reduction, while providing incentive for greater production, profits, higher wages and more jobs. If you want one example of how changes in regulation can lead to productivity, think of the business that doesn’t happen on public holidays because of penalty rates that gives workers triple time!

Keating deserves respect for his work changing the mindset of Australians to making the hard decisions that ultimately help the economy. However, he largely should be ignored as an objective commentator when it comes to party partisan politics.

How do I know that? Well, I was taught by Paul Keating, commenting on his good and occasional bad work between 1983 and 1996 in major newspapers, on radio and TV. One thing he taught me well was: don't be afraid to slam someone who plays the typical politician. Just about everything in life that we need is just outside our comfort zone and first-rate politicians have to have the guts to try to take us there.

Don't get me wrong, if the GST and the overall tax package stinks, I’ll slam that too. At this stage, criticisms should be ignored, especially when it comes to die hard Labor supporters, who know that his current leader is a popular as measles in a pre-school!

Mr Keating is being a bit naughty on this one.

(By the way, the Dow was up overnight and so was oil – funny that.)