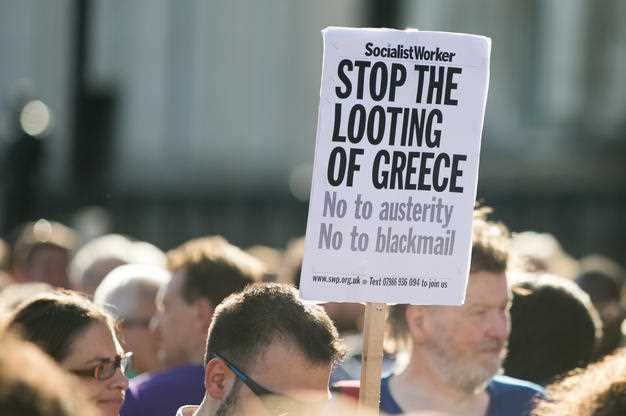 Just how serious is the Greek debt thing?

Okay, the Greeks have taken us where I thought they might and yes, global stock markets have reacted predictably — sell first and ask questions later. Uncertainty prevails and this will always rattle stock markets in particular. However the key question is: just how serious is this sell off?

The first up reaction is not good and suggests, at least for today, that it looks pretty serious. Asian markets, including our own, weren’t impressed with the impasse between Greece and its Euro-lenders, with the Japanese stock market down 2.88%, the Hong Kong Hang Seng off 2.61% and our S&P/ASX 200 down a considerable 2.23% to 5422.5.

I expected Greece to rattle stock markets if it failed to get a new debt deal. The wild and whacky idea of a referendum, which meant a default is likely on today, was always going to scare stock players.

In Europe, the fear factor was even greater with the German DAX off 3.56%, the French CAC 40 down 3.4% and the Spanish IBEX 35 4.56% lower. The banks in particular were slammed but Greek banks were spared, with the Athens stock market closed until July 6, the day after Sunday’s referendum.

Wall Street did not ignore the Greek-created instability, with the Dow down over 350 points and the VIX or fear index rising to 17, which was better than a 20% jump!

At least for now, the Yanks are treating this as serious.

Here in Greece, locals are getting a taste of what life without EU support will be like if they vote “no” to the EU lenders proposals, which will put them on a collision course with a so-called Grexit or Greek exit from the Eurozone.

On Monday, Greek banks were closed and they could be that way for the rest of the week to avoid a run on them. There’s a limit of 60 euros for anyone drawing out money from an ATM and these disturbances could have a real impact on how Greeks vote in Sunday’s referendum.

I think this is much more serious for the Greeks than we Aussies but there will be some stock market pain in the short-run for us, until key market players are happy that the European banking system can handle this new curve ball.

Ultimately, the European Central Bank should have a plan in place to ensure that the Greek concerns and the run on banks doesn’t extend to other European institutions. How the ECB handles this crisis will have a big bearing on what happens to stock prices this week.

Tomorrow will be a big test on the seriousness of all this. If the script is followed, then the Greeks don't pay the IMF their 1.5 billion euro and so they’ll be in default. The actual failure to pay up could lead to another leg down for stocks. It wouldn’t surprise me but given the Greek economy is only 2% of the Eurozone economy and 0.3% of world GDP, then as long as the ECB manages money around the region in places like Italy and Spain, then some time this week or after the referendum on Sunday, there could be buying opportunity.

Interestingly, if the Greeks hate what this week brings with banks closed, the thought of their wealth, or deposits in euros, having to be converted to drachmas just might lead to a substantial ‘yes’ vote on Sunday.

That would power up stocks on Monday. If you think you can read the Greeks, you could make a fair bit of money. However, you would have to be a psychological genius to be able to understand how this lot will vote!

The Greek PM Alexis Tsipras is telling his people to vote ‘no’ but if they vote ‘yes’ it will give him the support to stand up to the Parliament here. Given what the IMF’s Christine Lagarde was saying yesterday, a lifeline could be thrown out to Greece by its EU lenders.

That said, if the referendum brings a resounding “no” vote, then the thought of the Grexit and a possible contagion effect of others following, (which frankly I doubt) could rattle markets again next week.

The Greek drama continues and why would you be surprised? Greeks are a very dramatic mob. That’s why I like them but it gets a little hard to take when it hits me in my hip pocket. On that subject, I do think the current losses will be short-lived so I’m seeing this as a buying opportunity. Yassas.