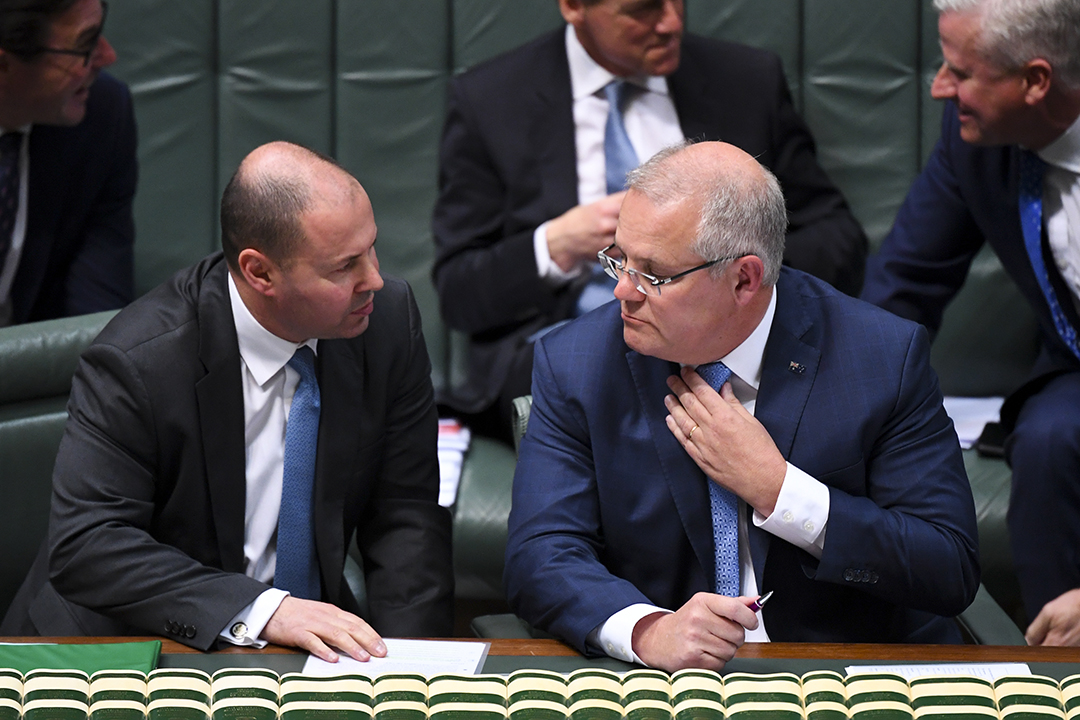 Josh & Scott need to be the loudest voice

The job numbers came out yesterday and they were pretty good. In many ways they were at odds with what a lot of people think about the economy. Last week’s business and consumer confidence numbers basically said that we think the economy under the Coalition, who we voted in only five months ago, stinks!

Meanwhile, the best take on the economy this week was not provided by the current Treasurer, Josh Frydenberg, but the former Treasurer, Peter Costello. And he might be someone the nation’s ‘new boy’ bookkeeper needs to learn from.

I reckon the economy is at a tipping point and is badly in need of a national voice, who bolsters confidence and virtually says: we will do “whatever it takes” to ensure our economy rebounds into growth rather than recession.

This week, Costello cited our low unemployment rate, the trade and current account surplus and other economic pluses and virtually asked: why are we cutting interest rates?

The Morrison Government is under pressure to step up and deliver fiscal stimulation to the economy, which would mean the Reserve Bank can stop cutting interest rates. To date, these rate reductions have had an underwhelming impact, except for creating jobs. There are those with a few brains suggesting the cuts are having the reverse effect and are spooking Aussies who are asking: “How bad must the economy be to see the cash rate at 0.75% and set to go even lower!”

Yesterday’s jobs report was a case in point, where the good news swamped the bad news. The only negative number was the fall in the participation rate from 66.2 to 66.1, but 66.2 was a record high last month. So let’s just think about that figure, as it says Australians are looking for work like never before, which has to be a good thing.

But wait, there’s more to consider from the jobs report. Check it out below:

• Employment rose for a record 36th consecutive month, up by 14,700 jobs in September.

• Unemployment fell from 5.3% in August (in seasonally adjusted terms) to 5.2% in September.

This is all good stuff. But don’t take my word on this, let’s see what a working economist like CommSec’s Craig James says about the numbers. “This is just what the doctor ordered,” he wrote. “More jobs being created with a jobless rate going south rather than north. Fewer people are unemployed. At the same time, the icing on the cake is that under-employment and under-utilisation rates fell in the latest month. Add in the fact that the female jobless stands at 5%, with the participation rate at record highs. There is no reason for the Reserve Bank to cut rates again in November – giving the central bank more time to gauge the effectiveness of earlier rate reductions.”

So the job market is pretty good but lots of areas of the economy are worrying, such as confidence, business investment and economic growth. And that’s why we need a strong Treasurer who KO’s the negative naysayers and lays out a programme that engenders confidence.

This comment from Craig James justifies why I’m yearning for Josh and his boss, ScoMo, to step up and give the impetus to confidence, which will fuel economic growth, jobs and wage rises. “There is growing anecdotal evidence that the super-low interest rates are spooking some Aussie consumers and businesses, making them less likely, rather than more likely, to spend, borrow and invest. The Reserve Bank has done enough for now,” Craig noted. “If the economy was to really lose momentum with unemployment driving higher, then a combination of fiscal and monetary policy would be required”.

Historically central banks come to the rescue when the you-know-what hits the fan but this time they’ve got in ahead of the curve. In contrast, the Federal Government is relying on tax cuts promised in April, when our view on the economy was a little more positive.

Our economy is going through a structural change because of digital disruption and industry killers like Amazon, Facebook, Apple, Google et al, which are changing not only the relevance of old industries that we have monitored in the past to guess where the economy is going but are redefining what’s produced, where it’s produced and what price it can command.

As consumers chase the best deals in the world from the alternative, new age sellers in the world might be explaining why their employers here can’t easily pay wage rises.

It’s lost on normal people that when tariffs made imported products like Mercs expensive in the old days, it made a Holden price competitive, so GMH provided jobs and nice wage rises. But those days are gone. And when the Internet and credit cards made it easy for accountants to use bookkeepers in India, it helped profits, cut costs to customers and helped Indian families live better. But it hurt local bookkeepers’ revenue and their ability to pay higher wages to their staff and to employ more staff!

The uber modern world, which gives us stuff cheaper than ever before, has made wage rises harder to give, unless you’re doing something special to help the business kick revenue and profit goals.

When Gerry Harvey owned The Byron resort in Byron Bay, he said he was paying $48 an hour for dishwashers on Sunday night, while the equivalents in Fiji would be lucky to be on $2 an hour!

With such a crazy new world, I reckon we’re doing OK but we need a leader to talk us up.

Josh or Scott have to start talking tax cuts and other fiscal spending, such as infrastructure programmes. And time is of the essence!