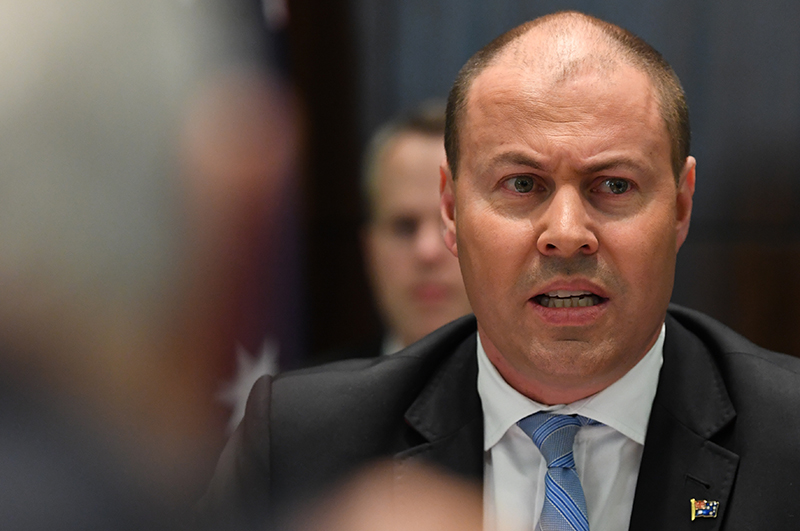 Josh, give the banks a break

I don’t think house price collapse talk is based on anything more than attention seekers trying to get noticed but there are sneaky developments that Treasurer Josh Frydenberg has to get across. And if it means taking on regulators to ensure banks can lend, well, he better speak up and show whose side he’s on!

Sure, let’s give him three cheers for killing the GST on tampons and working with the PM to come up with a deal designed to placate WA voters over what share of the GST they get.

As a consequence, all the states will be made happy, going forward, as no state will receive less than 75 cents in the dollar from the GST pool — though this will cost the Budget $1 billion. And tax purists and hard-nosed economists would prefer a GST on everything rather than having exemptions, but that’s something for a future PM with a big majority and lots of loyal, true believers.

Both these decisions are politically-driven but they do address some fairness issues as well. And both the new PM and his number one number-cruncher are looking effective in the short time they’ve been running the show. Of course, they only have a short time until the next election.

Provided the Libs hold Malcolm Turnbull’s vacated seat of Wentworth, (and these two guys looking the goods will help in that cause), the election is likely to be on May 18. However, if they lose the seat and the majority in the House of Reps, we could be off to the polls before that.

Mind you, if I was Scott, I’d hang on to his coveted job as long as damn possible. Seeing the top two Government pollies in the country perform is good for business and consumer confidence, and will bring out the best in the Opposition, such that Bill Shorten might alter some of his policies that could hurt retirees’ lives under a Labor Government and also exacerbate the threats to the housing sector.

And this is where Josh and the PM have to get vocal to ensure that the banks (despite their exposed bad behaviour at the Commission) can still lend or else not only will prices fall faster than qualified property experts think, it could slow down the nice growing economy, kill the great job creation and KO any decent chance of wage rises.

I put that last sentence in for all of those who don’t understand economics and are praying for the banks to be burnt at the stake and bankers future progeny to be stained with the sins of their fathers!

Yeah, I get it, lots of people hate banks on one hand but they learn to love them when they say ‘yes’ to a home loan for that dream home a bank-hater might be sweating on. Banks aren’t all bad and have been accessories before the fact for all those Australians in Sydney and Melbourne who’ve seen house prices go through the roof over the past five years.

When the people of Melbourne’s Middle Park and Albert Park last year learnt that their houses went up 40% in one year, I wonder how many of them thought: “Thanks God the bank backed me on this buy?”

OK, you might want to see it as doing a deal with the devil but a hell of a lot of us love that little piece of heaven we come home to each night or we go to on the weekend in a lovely beachside or country town.

But away from our passion for property, which those devilish banks make possible, they also help us grow our wealth. I love shares but banks won’t lend me anything like they would for property and it has been this willingness of banks to believe in property and us as ‘pay-backers’ that has helped us get richer.

The Royal Commission and the work of APRA have made it harder for banks to lend. APRA told banks to make it tough for investors and Chinese borrowers, when banks were lending like there was no tomorrow and house prices were surging.

And that’s why I think Josh has to roll up his sleeves and get involved in what’s happening to bank lending. Banks need their butts kicked for treating customers badly but making the assessments of who can borrow so hard that quality borrowers are being knocked back or asked to jump through ridiculous hoops, is regulation gone mad.

A great Treasurer would talk to lenders, mortgage broking groups and note the growth of non-bank lending. Loans and advances by non-bank financial intermediaries rose by a huge 10.3% over the year to August, up from 6.2% in July. That’s the strongest annual growth in a decade!

Thankfully, the non-bank lenders aren’t bossed around by APRA and haven’t copped it so much at the Royal Commission but they can’t do the job of banks and they often lend money at higher interest rates. This is another reason why the nation’s money champion — the Treasurer — can’t ignore these lending problems that could hurt house prices and the economy.