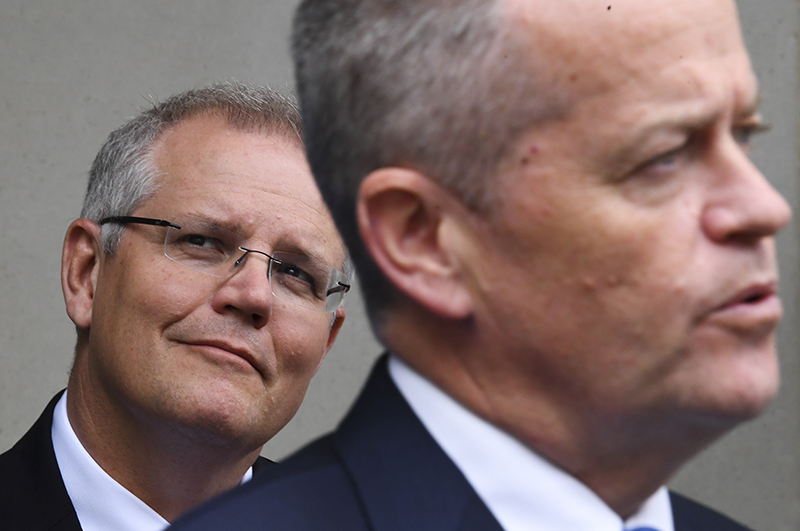 It's Bill & Scott versus the doomsday merchants

If you suffer the problem of having one eye honed into identifying all things negative to confirm your hopes and dreams of house price collapses of an Irish-GFC kind, which then causes a recession, you might have missed some of the good news that has been threatening self-belief in your own infallibility.

On the other hand, if you’re a cock-eyed optimist who needs some data to reinforce your preferred slant on life, let me give you a dose of what you like — good news.

And for balance, I’ll throw in some worrying signs that could eventually work against the guarded positive expectations of Treasury, the RBA, the majority of economists, the homeowners of Australia and yours truly.

Knowing all this is timely as it’s a big week for economic data here and overseas. Over the next five days, we’ll see the February lending numbers, the monthly Westpac consumer confidence reading, two RBA speeches from the Deputy Governor, Guy DeBelle and the Financial Stability Review will be released.

Meanwhile, in the US, we see factory orders, inflation, business optimism and consumer sentiment. And this comes after the Yanks registered a big 196,000 jobs in March rather than the 175,000 that were expected, wiping out many “recession is around the corner” calls from US doomsday merchants.

Here’s the good recent news that most media outlets ignore:

• Retail trade rose by 0.8% in February. And the more consistent grouping of ‘larger retailers and chain stores’ showed that sales rose by 1.4% in the month.

• The NAB business conditions index rose from +4.2 points to +7 points in March, above the long-term average of +5.9 points.

• The Australian Industry Group Australian Performance of Manufacturing Index fell by 3 points to 51 points in March. Any reading over 50 indicates expansion.

• The trade surplus rose from $4.35 billion to a record $4.8 billion in February. The annual trade surplus with China hit record highs, as did annual exports and imports with the country.

• China's Caixin/Markit Manufacturing Purchasing Managers' Index expanded at the strongest pace in eight months, rising to 50.8 from 49.9 in February.

• The pan-European STOXX 600 index rose by 1% to its highest level in nearly eight months on Thursday. Sentiment was boosted by renewed hopes for an imminent US-China trade deal and better-than-expected February Eurozone retail sales data. The German Dax rose for a fifth consecutive session, up by 1.7%.

• The Australian Industry Group (AiG) Performance of Services Index (PSI) rose by 0.3 points to 44.8 points in March, remaining near 4-year lows. Still, a reading below 50 indicates contraction of services activity.

• Consumer inflation expectations over the next two years fell from 4.2% to 3.6% last week – the lowest level since records began in October 2011.

The CoreLogic Home Value Index of national home prices fell by 0.6% in March, which is the smallest decline since October, to be down 6.9% over the year. It comes when clearance rates at auctions are on the rise but it’s too early to start crowing.

The very objective Dr. Shane Oliver from AMP Capital looked at recent stats and this is what he came up with: “Australia saw some upbeat February data over the last week with a bounce in retail sales and building approvals, while the trade surplus rose to a new record high. And the pace of house price falls slowed a bit in March according to CoreLogic. This all provides a bit of confidence that March quarter GDP growth may have improved a bit from the dismal pace of 0.3% and 0.2% seen in the September and December quarters respectively.”

But he throws in some sound reasons for not getting too carried away so I won’t. But it might help if more and more Aussies actually learnt that our economy isn’t as bad as the media usually portrays it. And two guys who could help the optimists beat up on the pessimists are Scott Morrison and Bill Shorten with their promised tax cuts. Their promised Budget/pre-election tax cuts are all pluses for economic growth, profits and the overall stock market index.

That said, I would’ve preferred Bill and Chris Bowen to have promised to introduce their negative gearing and capital gains tax changes when the housing sector and the economy weren’t under slowdown pressure rather than locking themselves into a January 1 start date. I guess I can always hope that they do the usual politician’s trick and break a promise!