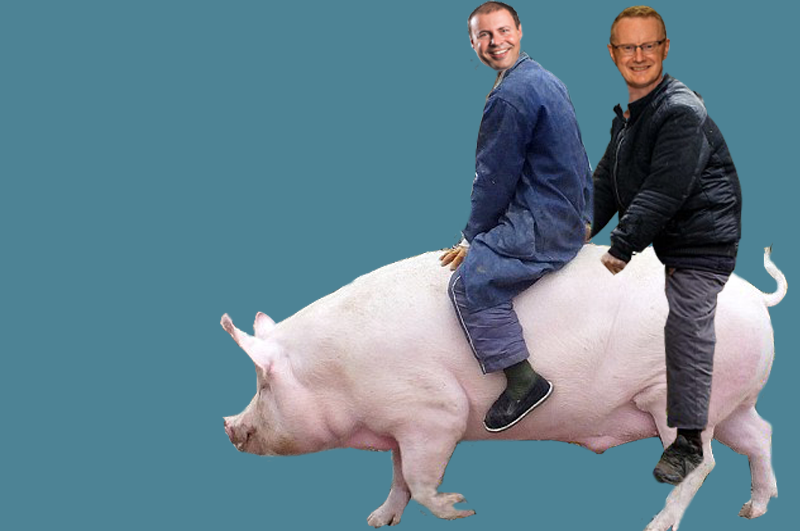 Floods, droughts, a contracting housing sector and a slower-than-expected economy in the September and December quarters haven’t helped the Government crow about a surplus for the Budget this financial year. However the Treasurer is telling us a $7.1 billion surplus is coming down the road for 2019-20. And Josh Frydenberg is accused of riding down that road on a pig, as he tries to win votes via good old pork barrelling.

Yep, tax cuts for all (almost all) was the only rational response to endless stream of Newspolls that told the Government that the voters of Australia had stopped listening and already cast their votes in their heads for the May poll.

Historically, I’ve nearly always agreed that good economics was bad politics and good politics, like tax cuts (when we’re within a reach of our first Budget Surplus for over a decade) was bad economics. But this year is different.

And that’s because for the first time ever in my economic reporting lifetime, the Reserve Bank has actually recommended that the Government give tax cuts. Yep, that’s what the Assistant Governor of the RBA, Luci Ellis, said in a speech last week. As I said yesterday, the central bank wanted the Treasurer to put more pork on our forks.

Last night’s figures tell us that a year that was supposed to grow at 3% dropped to 2.25%. And now with house prices potentially threatening to hurt consumer confidence and spending, a tax cut play, spending on infrastructure (especially in Queensland where the Government needs votes) makes both economic and political sense.

In case you want to know what you’ll get out of this RBA endorsed pork-barrelling, the table below sums it up neatly.

These tax gifts have effectively been doubled because the Government had already promised these tax offsets last year but elections and a slowing economy certainly improves the generosity of Treasurers!

There’s a lot being made about further measures in 2024/25, which will take the 32.5% tax rate down to 30% but that’s just too far off for me to care about. In reality, this has been a nice exercise in what is fiscally possible in the tax cut department but I doubt that this will change what the bookies are saying about the upcoming election. However it should force Labor to come to the party and try to match many of these cuts ahead of the May poll.

Sportsbet has Labor as a $1.17 favourite and the Coalition is at $4.85. I don’t expect these odds to change much today. One of my mates who wants a Coalition win asked: what are the chances that his favourite team will get up? I quoted him these odds and said the bookies don’t get election results wrong, but being an optimist, like yours truly, he reminded me that they did with Donald J. Trump!

I guess pigs can fly in the USA but even with this pork barrelling (tax cuts for nearly everyone) Budget, I’m not expecting to see it in the May poll.

The best take away from the Budget is that economic forecasts point to an improving economy, with rising wages. Let’s hope that they’re right and that Labor, if it forms government, backs off a January 1 start to negative gearing changes, which could KO the housing sector when it’s already in a spot of bother, along with the economy at the same time.

By the way, in case you missed it, Labor plans to put on another Budget in September!