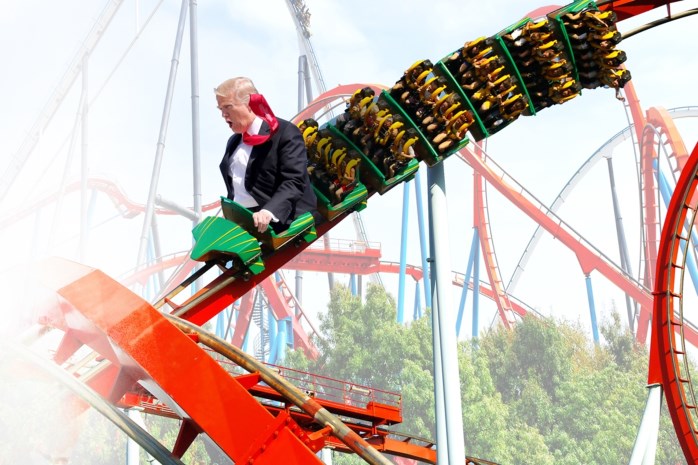 Is your seatbelt fastened? Big events this week could shock the world!

Buckle up your financial seatbelt, the week ahead could be geopolitically dramatic, with the heavyweight contest between Donald Trump and Kim Jong-un scheduled in Singapore today. This follows the US President virtually giving his G7 buddies the three-finger salute over the weekend, when they pushed for lower tariffs and left them “not happy Don, not happy!”

Also over the next couple of days, we’ll hear from the US central bank — the Fed. Interest rates are expected to go higher, with the US official rate set to lift to 2%.

Meanwhile at home, it’s a huge week for economic data, which I hope will confirm the great story we took from last week’s run of data, with economic growth spiking to 3.1%. Be clear on this: the economic picture here and abroad make good viewing but expert market views are becoming increasingly negative.

This is nothing new as we always have expert views that become negative. The media love to report these scary predictions, while I generally ignore these publicity seekers. It annoys me that no one in the media keeps a log of these big, bad calls and then gives it to them for being wrong!

The flipside also annoys me that they then praise many of these forever predicting doom types when bad market times happen, though there never is praise for the courageous market callers who have got it right since March 2009!

Yeah, I know I’m talking my own book here but it is really annoying when you have fought the doomsday merchants for nearly every year of this nine year plus bull market. And I know the only time I’ll get publicity is if I miss calling the end to this rising market.

Life sucks and you don’t die!

Anyway, back to the hear-and-now, and with all these interesting events overseas and our local data picture (which will bring important business and consumer confidence readings along with the latest unemployment/employment report), you have to expect some significant market reactions.

The Singapore meeting, the Fed and any G7 negative reactions on tariffs against the USA, could easily spook Wall Street. And world markets would play follow-the-leader. So this week’s news headlines could be quite impactful on our hip pockets, our super and my market-calling reputation.

Let me make it clear: the economic story keeps me positive on stocks but I know a curve ball thrown by a ‘black swan’ can shock markets. And good economic outlooks can turn on a dime, like we saw with the GFC from late 2007 to early 2009.

Wall Street managed to end positively with its first trading day after the G7 but it wasn’t solidly so. You’d expect a peace deal in Singapore would be great for stocks but a G7 retaliation to the US President could rock stock markets. And it comes as Europe faces its Italy challenge, with a whacko left-right Coalition in power that could threaten the country’s participation in the European Union.

Making matters a little worse are the latest economic readings from Europe and Japan, where the numbers have been better than expected but the most recent ones were worse than expected. It’s not a trend yet but these slightly less than positive numbers are ill-timed.

Meanwhile, the US economic outlook looks very good and we could be heading in the same direction. But we don’t need any market madness.

And this is where some scary market calls come in.

True to form, CNBC put the spotlight on Francesco Filia, CEO of the fund Fasanara Capital in the UK, who apparently predicted “the dramatic correction of February” this year. Of course, there were no references to past failed calls because the media forgets them!

Filia thinks hubris is making too many ignore values on crucial stocks getting out of wack. I do worry that I learnt that 25% of the S&P 500 Index is now made up of tech stocks! That means any really bad news for the FAANG group — Facebook, Amazon, Apple, Netflix and Google (listed as Alphabet) — could send the world’s most important stock market index on a big slide.

Filia points to economic trouble for Turkey and what Italy could do to bond markets. And all this comes with historically high debt levels compared to GDP in many of the G10 group of economies.

But this is the most worrying Filia argument cited by CNBC: “But the fund's report noted the worst market drops in history were preceded by lower-than-average volatility, stronger-than-average earnings, positive GDP (gross domestic product) growth and bullish sentiment — visible in 1929, 1987, 2000 and 2007.”

Of course, there were plenty of other times when the above conditions existed and there weren’t market crashes and no one seems to keep records of these times. Funny that.

Against this, the likes of Credit Suisse, LPL Financial and Citi are on the side of market optimists. I’m in this camp but I’m aware that Donald with Kim, the G7 with tariff retaliation, Italy and Turkey along with the Fed are all curve balls that could see the stock market get struck out.

But I do have a little worry with Ray Dalio of Bridgewater Associates turning bearish.

The website Zerohedge recently reported Ray’s team saying: “We are bearish on financial assets as the U.S. economy progresses toward the late cycle, liquidity has been removed, and the markets are pricing in a continuation of recent conditions despite the changing backdrop.”

Dalio doubts whether the current “picture of calm” can persist and that “2019 is setting up to be a dangerous year, as the fiscal stimulus rolls off while the impact of the Fed's tightening will be peaking.”

I’ve always said I’d get more cautious about stocks in 2019 so I damn well hope we see some nice stock price rises for the rest of the year. Good news out of Singapore and from the Fed would be good encouragements for that kind of outcome.

Stock markets are always a rollercoaster ride but I don’t think we’re at the top, where you need a seatbelt for the sudden plunge down.