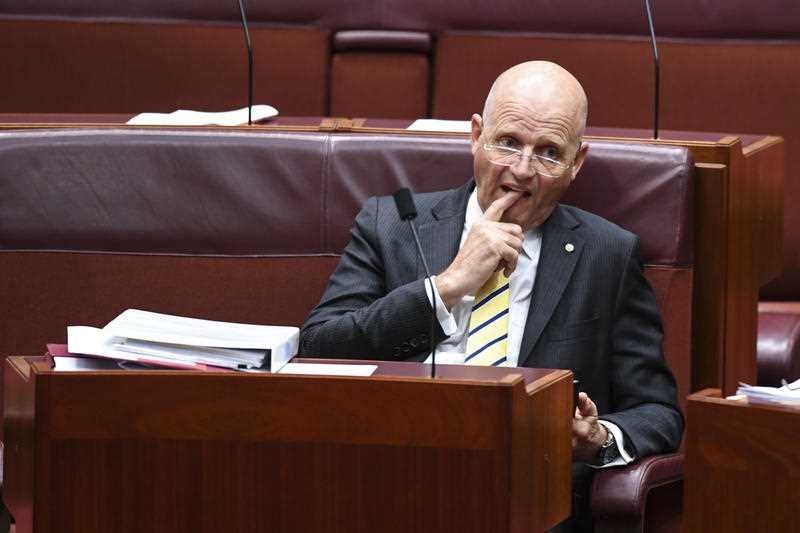 Is worrying about budget debt only for losers?

One story I get sick of being pedaled around by non-economists is about how desperately we need to pay off the Federal Government’s debt. And every time I hear or see a non-economist whinge about this in the media, I think of murder, bloody murder!

It’s like these people think that big debt is bad, and it can be, but it also can be good. It’s like murdering someone — if the person is an innocent passerby, it’s terrible but if it’s a madman with an axe, it’s OK.

Worrying about debt is also media fodder around Budget time but some of my mates in the media use it to emphasize how Malcolm Turnbull is a lily-livid coward on the tough stuff of politics.

Yesterday, the very independent, Senator David Leyonhjelm, who really should have a PR business (I guess he does!) wrote a piece for the AFR about his alternative Budget ahead of Scott’s effort on Tuesday.

Dave’s a debt dramatist, being a level-headed kind of guy and in order to nuke the debt levels, he recommends things such as:

He does have other virtually unsellable ideas and even more importantly, un-passable ideas through the Senate, making his quite complex and considered analysis a virtual waste of time and a serious attack on the trees of Australia.

Worse still, his diatribe would only be read by the political hardliners who drink the same Kool-Aid as Dave.

As an economist, I agree with David that the debt needs to be cut back and the deficit needs to become a surplus but people need jobs and consumers, who are only now making a comeback from their GFC-blues, don’t need economic tough love now.

These people who have clearly never read Economics for Dummies seem to think you fix a budget deficit by simply cutting government spending.

If the consumers were in a big spending mood and our economy was growing over 3%, then David’s big spending cutbacks would do less damage to the economy. But our last reading was reported in March for the December quarter.

The Australian economy advanced 0.4% in the December quarter of 2017, less than market consensus of a 0.6% expansion and after an upwardly revised 0.7% growth in the previous quarter.

As Trading Economics noted: “It was the weakest growth rate since a contraction in the September quarter 2016, as positive contributions mainly came from final consumption expenditure, while non-dwelling construction and net trade had a downward effect. Through the year to the fourth quarter, the economy grew by 2.4%, slower than an upwardly revised 2.9% expansion in the prior quarter and slightly below expectations of a 2.5 percent growth.”

So swallowing David’s tough medicine now could leave Scott Morrison up on a charge of ‘murdering the economy’!

Right now, this economy doesn’t need the Government to turn into scrooge and tax cuts will really help the team that has kept the show on the road — consumers!

Looking at the growth numbers you can see the importance of consumers and the Government.

And with property prices falling and construction slowing, we need consumers and Scott’s credit card at least for one more year.

By the way, the current growth hasn’t hurt job creation and those 400,000 plus jobs have helped reduce the budget deficit anyway. See the chart below: 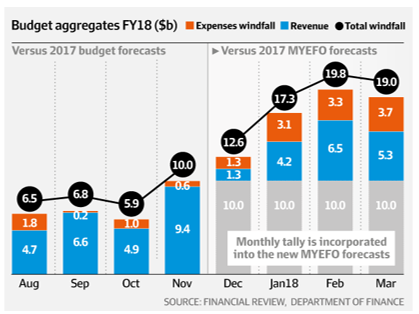 As Bill Clinton implied when he said: “It’s the economy, stupid”, economic growth will solve a lot of economic, social and political problems.

When the economy is going gangbusters, that’s the time for Government to get out of the game until the next recession comes along. And by the way, just look at our debt compared to Japan and a similar economy like Canada.

As you can see, our debt problem is not an international disgrace. Great winners in business and investing know how to use debt in a timely way.