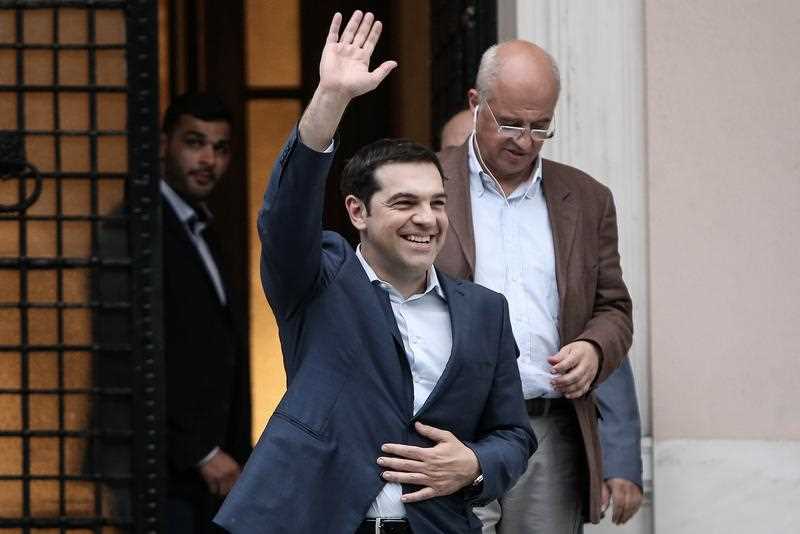 A crucial meeting of Greece and its creditors happens on Monday (European time) in Brussels and the Greeks have been warned they’d better show some compromise before this crisis summit, as it has been called.

Last week, the Greek central bank warned what a default and Grexit might mean. The UK’s Telegraph newspaper reported it this way: “It warned of an ‘uncontrollable crisis’ if there is no creditor deal, followed by soaring inflation, ‘an exponential rise in unemployment’, and a ‘collapse of all that the Greek economy has achieved over the years of its EU, and especially its euro area, membership’. ”

These sobering words led to a depositors dash by Greeks to their nearest ATM or bank to withdraw their savings.

It got so bad that the European Central Bank had to spot its Greek equivalent anything up to 1.8 billion euros. Even with that, the local central bank wondered whether banks would be able to operate on Monday given the outflow of deposits!
(Yep, I joined the stampede and was initially knocked back by my ATM for a 1000 euros but I coaxed that damn machine into giving me 600 euros. In most countries, I wouldn't worry in the age of credit cards and eftpos machines but we all know how the Greeks love cash.)

There are those who say that this ECB/Greek central bank play was meant to put the cat among the left-wing pigeons in the Greek Government to get them to start being realistic with their creditors.

Along with all the implications of the central banks’ warning on the economy, it suggested that Greece would be tossed out of the European Union as well, which was seen as a big call and a matter for debate. Experts on the Eurozone list numerous cases where the ECB acted as a strongman with wayward governments as its actions can have a big impact on the borrowing costs of governments that go cap in hand to the bond market. Italy’s Silvio Berlusconi learnt that lesson not long before he lost his gig.

Remember the UK is in the EU but not the Eurozone.

As with most of this Greek debt drama, which could end as a Greek tragedy, there are many twists and turns. We know Greece has until June 30 to make the repayment obligation of 1.6 billion euro. They won’t get the remaining 7.2 billion they’ve been promised if that don’t make this repayment and they will be in default territory.

The German Chancellor, Angela Merkel summed it up insisting that “ a solution to Greece’s debt crisis must be agreed before Monday’s emergency summit.” (BBC)

Sunday morning in Europe heard talk about the Greeks making some surprising concessions but I haven’t seen hard evidence of it. Obviously, the Merkel warning was important and all eyes will be on this Brussels’ meeting.

And the plot has thickened, with Russia and Vlad Putin possibly riding to Greece’s rescue. I do say “possibly” and what plays out there should be intriguing.

At this stage, the Russians and Greeks could be set to build a natural gas pipeline that will help Greece grow their economy and jobs, as well as assist in debt repayment.

In his usual ‘good guy’ pose, Putin looked at his plan for Greece this way: "If the EU wants Greece to pay its debts, it should be interested in growing the Greek economy ... helping it pay its debts," he said. "The EU should be applauding us. What's wrong with creating jobs in Greece?”

I guess if Monday ends in greater crisis, then Russia could be Greece’s final trump card but it would create a new scene in this never-ending drama.

Keeping me hopeful, I did love the observation of Yanis Varoufakis, the Greek Finance Minister, who has lost his prominence as a negotiator for playing hardball with EU officials and cheesing off some of his own MP buddies.
He said that it was time for this Greek drama to have a happy ending!

I really hope they can massage all their lumps out of their negotiations to see it happen on Monday.

One final point to help explain Greece’s long-created problem and this came from Mr Varoufakis speaking to the German newspaper, Die Zeit: “Why does a kilometer of freeway cost three times as much where we are as it does in Germany? Because we’re dealing with a system of cronyism and corruption. That’s what we have to tackle. But, instead, we’re debating pharmacy opening times."

Monday is a most important meeting in EU history and how the markets respond will give us a clue about how important this whole affair is.

Some say it’s insignificant, while others predict Apocalypse Dow but this seems way over the top. I hope I’m right.