Is Morrison a Bradbury PM?

If you want to work out why leading a political party is so hard nowadays just look at what Scott Morrison has had to deal with just last week. And given what I will recap on, you have to wonder if someone who has been described as a Bradbury PM — being nearly the last man standing — will be able to rebuild his party enough for them to be a chance at the next election. 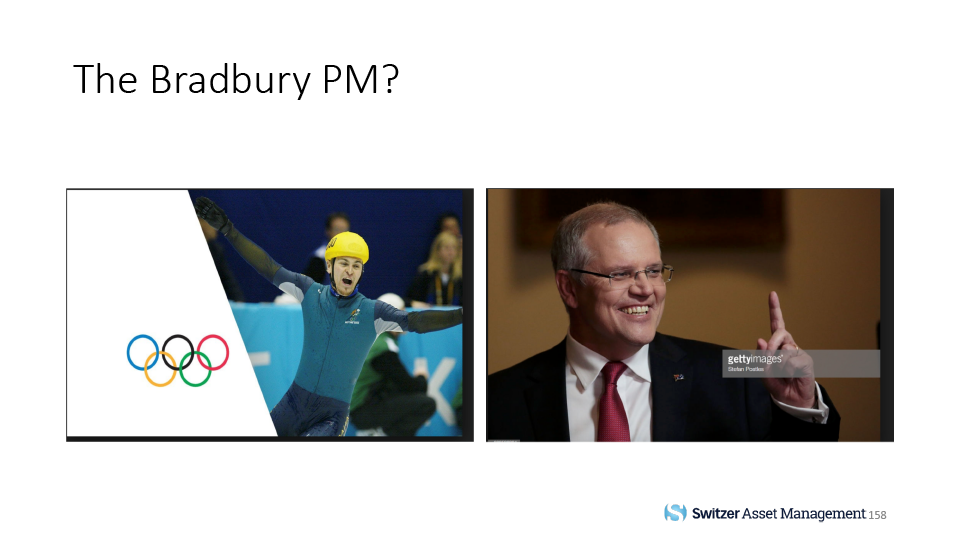 Before looking at the fairness of the Bradbury tag, which personally I think is fair, let’s have a look at what Scott has had to cop last week.

The Coalition is behind Labor by 44 to 56 on a two-party preferred vote and this is Labor's strongest primary vote since the party gave Kevin Rudd the heave-ho as Prime Minister in July 2010. Seriously, as someone who has known Scott since UNSW days when I taught him Macroeconomics 101, he doesn’t need another hair-losing week like this.

Looking at these roadblocks to success, which this mob have been great at building for themselves, you can understand why Malcolm is trying to get even with the party that rejected him. It might not be right but I know why he’s doing it — he’s pissed off and he’s not really a politician — and that’s why he lost the gig as the country’s leader.

Julie too would be cheesed off and PD better be in the clear or he’ll be seen as a dope of Barnaby proportions!

Wentworth’s decision shows what is wrong with the Libs — they don’t do as they’re told, as they would have under John Howard post-1996 and under Bob Menzies before that.

On the video mistake, a young person in the Fairfax press gallery journo, Latika Bourke, has raised PC eyes over the choice of a song that has sleazy, rap lyrics. But I can bet you Scott wouldn’t have heard the song before some flunky team member came up with a ‘great idea’ to add music and have Scott leading a unified Government putting their hands up to some rap crap about dollar bills!

Seriously, Latika, people not regarded as young don’t listen to music like this and when we’re forced to endure it we can hardly make out the lyrics! I can remember in my 30’s using MC Hammer’s “don’t touch this” lyrics in a news report but to this day I couldn’t tell you what “this” is and frankly, I don’t want to know!

The lesson for Scott has to be to become like micromanaging entrepreneurs, who don’t trust anyone with their precious brand! And this goes double for young and groovy members of staff who thought this video rap crap was a vote-winner.

And now to the Bradbury comparison, which I used in a speech this week. Unlike the uninformed, I think Steven Bradbury is a classic Aussie, whose gold medal via some luck was an overdue reward for a champ!

I interviewed Steven when I did the Qantas inflight program, Talking Business, for a decade. That’s when I learnt that he wasn’t just a lucky guy, who saw his four opponents fall over. No, he was a guy who was good enough to be in the final of an Olympics with the some of the best skaters of all time. And at his fourth Olympics, he won the gold he probably could have won at previous Olympics, if he hadn’t had bad luck.

Interestingly, Scott’s record as Treasury has been on show over the past couple of weeks, with economic growth coming in at 3.4% for the year to the June quarter and 3% for the year to the March quarter, which many economists predicted wouldn’t happen! Meanwhile, in the year to January this is what CommSec’s Craig James had to say about the then latest jobs report: “Records are made to be broken. Employment has risen for a record 16th straight month, moving ahead of the previous record period of job gains from May 1993 to July 1994. Over the past year, 403,300 jobs have been created – the most jobs in 12½ years.”

And for the year to date, after 44,000 jobs showed up in August, some 176,000 jobs have been created and many economists doubted that would happen at the beginning of the year too

During Morrison’s time as Treasurer, the NAB’s business conditions readings hit an all-time high in April this year. Consumer confidence has trended up into positive territory and the consumer is starting to spend again, if we can trust last week’s growth numbers.

And because there have been so many jobs created, tax collections are rising and spending on the unemployed is falling, and so is the Budget Deficit. The last progressive reading was that it was down to around $12 billion, but if these jobs keep being created we could see a balanced, or even surplus, Budget way before anyone expected!

Good Treasurers have often ended up as PMs and ScoMo, like Bradbury, had it coming to him.

But being PM is harder than being a Treasurer so he better learn about being a Prime Ministerial leader ASAP. And I’d be getting my skates on as fast as possible to find a coach who resembles someone like John Howard.

And history shows that JH was the last man standing when he got the top Lib gig in 1995, after years of trying and failing to convince his party he was a gold medal leader. And he went on to become the second longest serving PM in Australian history!