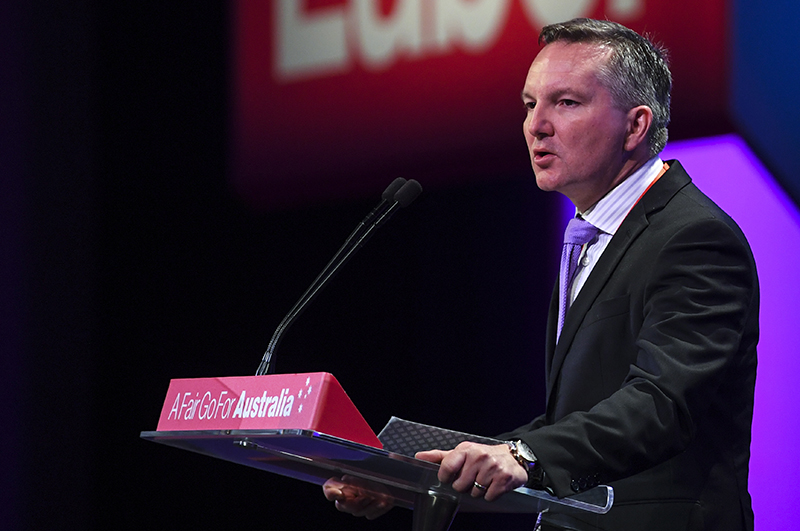 Would-be and most likely Treasurer, Chris Bowen, surprised me as I drove to my Sydney CBD offices yesterday, when he told a radio interviewer that Labor would not be backing down on their banning for tax refunds for retirees who have invested in stocks for dividends and the franking credits, which then create a tax refund.

If I’m a high flyer on the top tax rate of 45 cents, I’d pay 15 cents in the dollar for the income I receive from the dividends because the company has paid 30 cents in the dollar. Labor won’t change this nicety for me but because a retiree is on the best tax rate of all — 0% —they get the tax paid by the company on their dividends back as a refund.

The existence of this rule made it logical for many retirees to move into self-managed super funds, which meant many left industry and retail super funds to become DIY investors, long dividend-paying stocks. Many have been encouraged by this post-GFC era of term deposits offering rates that are closer to 3% than the 5% or 6% most retirees would love. These low rates have actually forced people who want to and may need to be safe investors into a more risky investment called stocks.

They know their capital could be hurt by a stock market crash, which probably will happen over the next 2-3 years but many have learnt that they can live with capital reductions, as long as their income remains pretty stable.

Dividends from stocks can be pretty resilient when a stock market crashes because often the businesses do OK over such times. Also, that’s why many retirees invested in the big four banks and Telstra for the ‘safety’ of their dividends. Over the past two years, they’ve seen Telstra’s competition woes undermine their dividend and the Hayne Royal Commission, APRA and the Murray Financial System Inquiry have all hit bank profits. Dividend drops for banks could be ahead, especially if a market crash and recession shows up over the next two to three years, when Chris Bowen could easily be Treasurer!

That’s why I would’ve expected Chris, who I rate as promising as an increasingly economically literate politician, might have been a little more flexible on the subject of retirees and their tax refund. The PM, Scomo, had to jump on his radio reply that if they didn’t like the policy “they were free to take their vote elsewhere.”

Now I know it sounds like a strong leader to have such a belief in a bold, potentially vote-killing policy but what worries me is that we‘re seeing a lack of flexibility on a subject that needs exactly that. I’ve argued before the success of the Hawke-Keating years was based on consensus, which meant smart policies were more inclusive rather than in-your-face exclusionary. It’s why Bob Hawke attracted former conservative voters and business leaders, explaining why Labor dominated politics between 1983 and 1996.

When I’m asked about how locked in stone is Labor’s commitment to its policy and when these questions have been asked by those getting say $10,000 to $30,000 refunds, I’ve always argued that a cap of $20-$30,000 was a good chance. But given what Chris said this week, I might be wrong.

It did create the Scomo response of: “This is the arrogance. They so think they're going to win this election ... that they just don't care and they'll change it all and they'll just basically give the two-finger salute to retirees right across the country.”

To be fair, Chris is showing he’s got what it takes to be a Treasurer, who loves the idea of collecting $6 billion by saying no to tax refunds for retirees. but historically Treasurers’ leaders and parties have often reined in their money-loving colleague. However, Bill Shorten is solid with his number cruncher, telling us that Labor will be the better party for seniors.

But how can Bill virtually accept the loss of 900,000 votes from the self-funded retiree group? Well, these numbers below help to explain it.

According to the Government and The Australian Institute of Health and Welfare in 2017, “there were 3.8 million Australians aged 65 and over and that’s 15% of the total population!”

Chris is clearly after the 77% of older Australians who don’t get a tax refund from being self-funded in retirement. This group were told to forget the pension and to look after yourselves. And along the way, other governments created rules that they would’ve been irrational to ignore.

The numbers above explain why Chris and Bill are playing hardball and it makes them look like strong leaders, which we need in Australia, but being flexible for a group of Aussies who have been led down the garden path shouldn’t look like weakness.

If the Coalition can’t do a Houdini and escape the next election with a victory, then it will be up to the Greens and Independents to force Labor into accepting that a cap on refunds at an acceptable level is fairer politics.

I’m not a great fan of Independents but the May election might bring some flexibility in my voting patterns, though I will draw the line at Clive Palmer!

(By the way, I’m due to interview Chris on my TV show after the Hayne Royal Commission recommendations are released. Gee I hope this little story doesn’t blow it.)