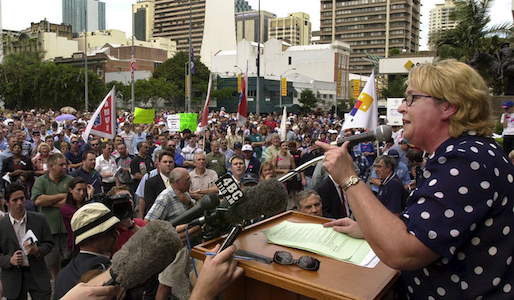 Some provocative reactions from readers of my story yesterday, where I was crowing that the GDP result was better than my beloved and much maligned Blues NRL team beating the all-too-good Queensland cane toads on Wednesday night, has forced me to evaluate my economic elation.

The ‘twitter-sphere’ can be a playground of twits. It can also lead to debate and controversy and, as the English poet William Blake taught us, there’s little progress without controversy.

On the same subject, George Bernard Shaw argued that if you want change, you need an unreasonable man. Of course, Shaw hadn’t heard of political correctness, so he put down the task to men. However it’s my observation that unreasonable women can also be agents of change. I’ve seen it in business and with my once wayward mates, who actually turned into decent husbands and dads via the influence of an unreasonable woman!

The former Democrat boss, Cheryl Kernot, is one such woman. It doesn't mean she’s always right so I decided to test her return fire tweet, which said “But the economy isn’t good for majority of households where casual or precarious work is dominant.” Kernot adds “more than half the workforce for the first time” is in this terrible situation.

On these numbers, I can’t see permanent part-timers being in “precarious employment”. A big number of casuals would be but a lot actually want to be casual for lifestyle reasons. The younger generations are certainly different from Cheryl and me. (I have more than 50 staff so this isn’t all academic economist stuff.)

It would be interesting to do a happiness audit of Aussies to settle my debate with Cheryl. For now, let me run through the people who should be happy.

The biggest mistake people like Cheryl and I can make is to believe we really know how happy or unhappy the majority of households are. A social economist (if one exists and they probably do) would have to get some measurable reference point for happiness, then check it out over time to smooth out the many reasons why we can or can’t be happy.

When Cheryl and I were making our way as politicians and economics commentators, we used to often hear about the Misery Index, which was the inflation rate plus the unemployment rate. Yep, this is what economist would call it! The Happiness Index wasn’t even considered!

In 1975, it was over 20! Australia was such an unhappy country that we voted to support the usurping of our Prime Minister by the Governor General!

I know lots of Australians could be happier and that’s a goal all governments should be working on. Having a happy country is a lot harder than getting growth up but at least this creates jobs. And I reckon someone in precarious casual work is happier than someone on the dole queue sitting home watching TV and playing video games.

We must always expect that our governments get better but we also have to be grateful for small mercies, such as an economy growing fast enough to create jobs.

Even if the Turnbull Government doesn’t deserve any credit, as many one-eyed commentators and tweeters might argue, the unbiased historian would note that the Senate has actually said “No” to many changes put forward. The company tax cuts are a case in point.

Business confidence is way over its long-term average. I don’t think it would be this high if a drover’s dog was the PM, despite what Simon Holmes a Court tweeted!  An argument based on balance rather than bias is always more insightful.