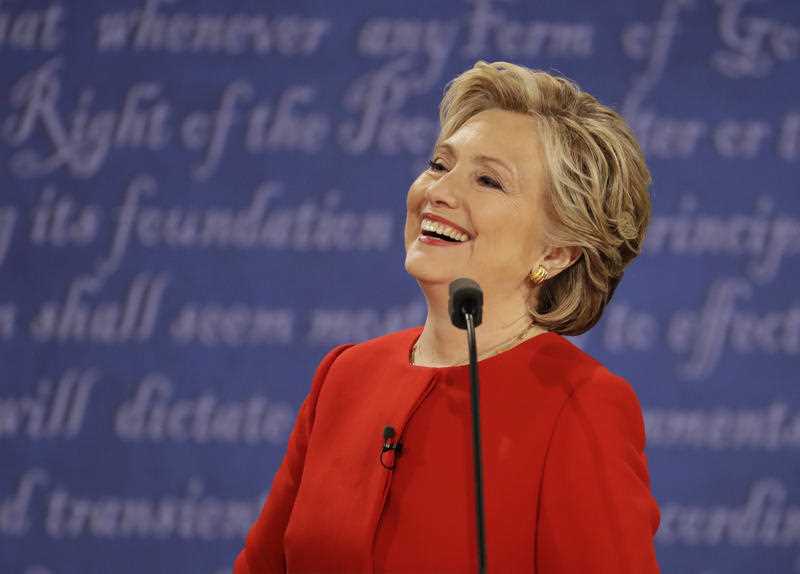 One US Presidential debate down and two to go. So who did Wall Street give the battle to? Well, US market futures went up, which pointed to a Hillary win and our local stock market peeled back losses but it was the S&P 500’s reaction that was always going to be the clincher.

The S&P 500 index tracks investor interest in the top 500 companies in the US, which are some of the greatest business outfits in the world. And it has become a pretty good predictor of election outcomes.

Before I show you how good, recall that Professor Alan Richtman, who has a 100% record in tipping election results since 1984, has given it to Trump. The ancient energy detection process of feng shui is practised by Master Feng, who has tipped US elections spot on for 18 years. On my TV show last week, he declared he is in the “Trump will win” fraternity.

On the head-to-head polls, Clinton leads 48 to 45.4, based on Polltracker numbers after the debate, but, on August 6, it was 47.8 versus 39.2. Trump has won back some love but it’s not coming from Wall Street.

The S&P 500 index has a good record tipping 19 out of the past 22 election outcomes. Dan Clifton of Strategas Research Partners in the US, talking on CNBC this morning, explained that there is a high correlation between the index and Hillary winning. She has been losing ground to Donald for a couple of weeks and stocks have been under pressure.

But more to the point: “If stocks are higher in the three months before the election, the incumbent party, which is the Democrats, win,” Clifton pointed out. “If stocks are lower, the opposition party generally wins.”

That’s the market adjusting to the uncertainty of the situation.

But wait, there’s more and it involves that social observer — Google!

Our great partner in worldwide online information investigation has produced a heat map of the USA showing interest in Clinton versus Trump before and after the debate.

Here is my photo shot of the map before and note Donald is red and Hillary is blue. 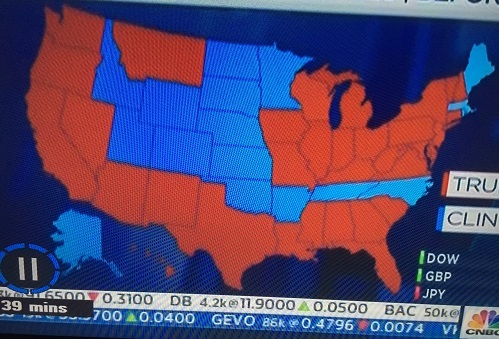 However, have a look at the map after the debate — it’s all Hillary! Are Americans only now discovering Hillary? 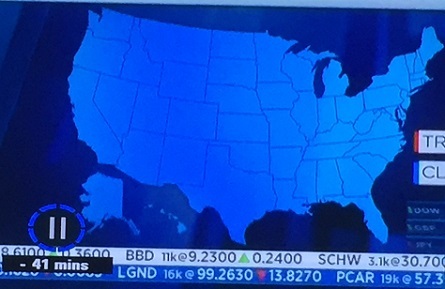 Wow, only in America! These guys never cease to amaze me. Clifton says 80 million people watched the debates and a lot of them had not looked into Hillary because Trump, effectively, is such good clickbait!

Helping Hillary was the consumer confidence number out in the US overnight, which was strong. This is how Forbes.com billed it:

“WASHINGTON (AP) — U.S. consumer confidence in September rose to the highest level in nine years, a hopeful sign that economic growth will accelerate in coming months. The Conference Board said Tuesday that its consumer confidence index rose to 104.1, up from 101.8 in August. It was the strongest reading since the index stood at 105.6 in August 2007, four months before the beginning of the Great Recession of 2007-2009.”

And get this: history shows when this reading is above 80, it’s good for the incumbent. Therefore the 104.1 reading is a ripper for Hillary!

Clifton says gasoline prices are also a great pre-election indicator. If they’re falling, it’s good for the incumbent. He says the current drop in gas prices is the biggest ever before a US election!

Finally, Morgan’s chief number cruncher, Michael Knox relies on the poll from The University of Iowa via its Iowa Electric Market operation and this graph is great reading for Hillary, with the Democrats in blue: 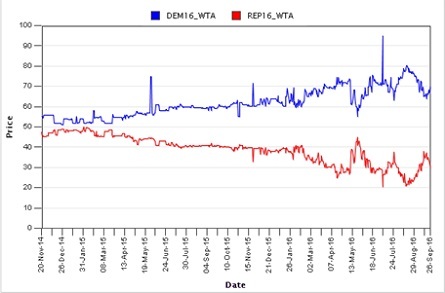 So the economic and market data points to a Hillary win, while the history professor and Master Feng see Donald as President-elect after November 8.

Last week, I wrote that I feared Trump would be President but for once in my life, I hope that something I wrote was wrong. Looking at these credible revelations, there’s a reasonable chance I just might be.