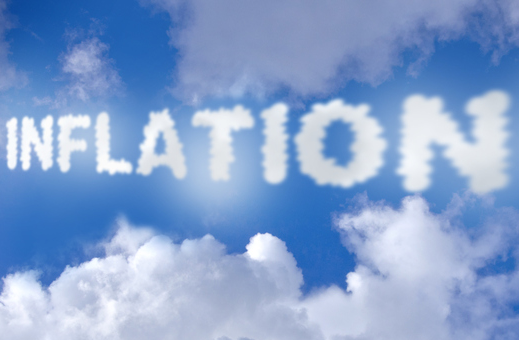 Inflation is out today. Pray that it's on the rise!

Today the part of the country that cares about money, business and our economic future will be hanging out to see the inflation number for the September quarter and most of these money-loving Aussies will be hoping for a higher inflation reading!

If you’re not a card-carrying member of the money-lovers group (as I call them), you might be influenced by the old world that told you that inflation rising is bad. You might also be a homeowner with a mortgage and the current interest rate environment has been like manna from heaven. But wait, there’s more to this story and it might be described as too much of a ‘good’ thing can eventually be a bad thing.

It’s very Socratic where the warning is “nothing in excess.”

Low interest rates because inflation is too low — worryingly low — implies there’s something wrong with our economy.

In the era where we worried about high inflation, the economy was going “gangbusters” as former Treasurer Paul Keating loved to call it. And what this brought was not only high economic growth and plenty of jobs, but also higher inflation. All the above meant the Reserve Bank had to raise interest rates to cool the economy down.

Well, that was then. This is now and our economy isn’t going gangbusters. And while I’m betting we’re on the improve and interest rates will rise next year, the jury of economists are still out on this economy of ours.

Paul Dales of Capital Economics thinks interest rates won’t rise until late 2019, while HSBC’s chief economist here in Australia, Paul Bloxham, is so bullish on the economy he thinks the first rate rise will be March next year!

That’s a big difference in economic calls and while I think Bloxham is more right than Dales, until we see more inflation and economic growth data, the jury will remain out.

So today’s inflation reading could have big impacts on our growth forecasts, share prices, the value of the Oz dollar and overall business as well as consumer confidence.

On the other hand, consumers have been largely pessimistic for most of 2017. Slow wages growth and rising power bills haven’t helped but we have seen positive signs from the labour market, with jobs coming in faster than negatively-inclined economists had been expecting.

The chart below shows what I’ve been saying and note the recent kick up of consumer confidence. We have to hope this is the start of something good. Any number over 100 implies optimists outweigh pessimists and vice versa. As you can see, optimists have only been in the ascendency in two out of the past 12 months of readings and even then it was only just with numbers close to 100. 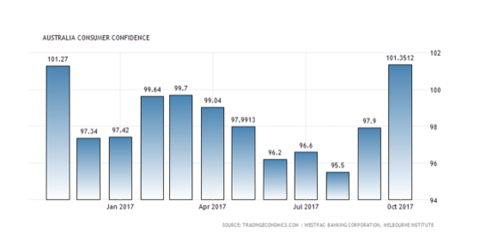 This week, Deloitte Access Economics economist, Chris Richardson, gave the optimists like me a boost, saying the “improvements in business profits and employment levels have primed the economy for some growth in wages, which have been stagnating for years.” (Fairfax)

Now he’s not tipping it’s gangbusters time but he concedes that the preconditions for an improving economy with faster rising wages and more confident consumers is on the way.

In a nutshell, Chris is telling us that the "clouds around Australia's economy are clearing".

My feeling is (and I’ve been saying this for some time) that our economy is on an upward trajectory with economies overseas all starting to grow in synchronization. And I loved the way Chris put it: "Global growth has the best breadth of anything you've seen since Clive Palmer started his diet, yet world inflation remains strikingly sleepy," Mr Richardson said.

Meanwhile, here in Australia, the Reserve Bank, Treasury and economists like Shane Oliver of AMP think our economy will grow in 2018 by 3% or more.

This is a good number for our economy as it implies more jobs, which can only help wages growth and more confident consumers. A better-than-expected, that is a higher-than-expected, inflation number will be good news for optimists, who want to believe our economy is well and truly on the comeback trail.

So what’s the expectation about today’s inflation?

CommSec’s Craig James tips the headline Consumer Price Index will be up 0.7%, while the core or underlying rate that strips out one-off spikes to inflation is tipped to be 0.5%.

The last annual reading for inflation was 1.8% and so 2% is expected today. If it's higher, it could lead to a higher level of optimism on the outlook for the economy. It would lead to “when will interest rates rise” questions but that’s better for jobs, profits and share prices than if the question is “when will rates fall?”

That would KO confidence, jobs, profit outlooks and share prices!

That’s  a question I hope is not asked after today’s inflation numbers and it’s why I’m praying for a rising CPI.