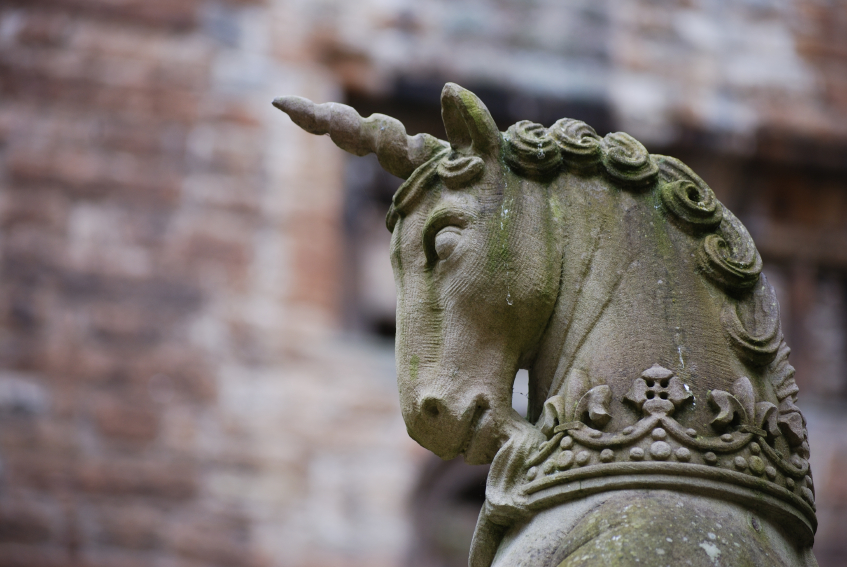 Treasurer Morrison has surprised many by pulling out the unicorn imagery to describe Labor’s policies, while he promised his reform proposals will not be “a legendary animal that has been described since antiquity as a beast with a large, pointed, spiraling horn projecting from its forehead.”

According to Wikipedia, this Scottish symbol yet Asian creation (how did that happen?) has the power to render poisoned water potable and heal sickness! I can’t see any reference to it generating economic growth and jobs or fixing budget deficits but I guess we get Scott’s imagery.

I quite like it and see it as applicable to this great stock market rally we’ve seen since the February 10 low of 4706, where the S&P/ASX 200 index has gone up a huge 6%! As someone who kept telling my readers and clients that the sell off was excessive and that this was a buying opportunity, you’d understand that I’m pretty happy. However, I am now asking: is this a unicorn or mythical rally?

Until Scott pulled the unicorn metaphor out, I was asking my expert buddies if the rally was a sucker’s rally or a real McCoy one but I quite like the idea of a mythical or unicorn rally that’s here on hope but ultimately is not real!

To be honest, I think the worst of the scare tactics used by big stock sellers (short-sellers and hedge funds) might have passed. A few weeks back, smarties were using the R-word too freely and it powered the sell off. Oil’s price was falling, there were doubts about what central banks from the US to Europe to Japan might do and economic data was not impressive in the key economies of China and America.

However, the big plus that helped turn a bear market experience into a 6% rally was the recovery of the oil price. However, this is linked to the tenuous proposition that there could be an oil deal between OPEC and key non-OPEC nations.

Yesterday’s rally was especially powered by the supportive comments from the Iranian Oil Minister, which surprised many as Iran was seen as a fly in the ointment to getting a production deal.

But this is not a set-in-stone deal. It’s only talk at this stage. Central bank action in Japan and Europe is not action, it’s talk too, which worries me when I think of the life of this rally.

There has been some action, with Deutsche Bank putting their hand up to buy $US5 billion worth of its bonds back. And Jamie Dimon bought $25 million JPMorgan stocks, which was a good CEO action to buy his own shares to underline that the bank bashing is excessive.

Meantime, there’s a fair bit of guessing going on too about how many rate rises the Fed will come up with this year. It was once thought four were coming but this market sell off and global growth concerns plus the Fed minutes have made some big traders think there might only be one rate rise, which would be good for stocks. However, this is speculation that can turn on a dime.

Overnight, US stock markets were slightly negative, which could mean markets are trying to consolidate at these levels or be poised to test the current levels.

I think if an oil deal of some kind happens, which is guesswork, and economic data remains OK to better than expected (which I expect), then this rally might end up being the real McCoy.

But as I say, it’s guess work, with some experts tipping we could see a “shocker” next week.

I hope that these calls turn out to be mythical and we see some developments that make stocks more buyable. But at this stage, it’s hard to be too confident. Next week is an important test week for this rally, with BHP reporting and a lot of economic data coming out of the US.

As you can see, I’m hopeful but not hugely confident that this rally holds but I think the worst of the sell off is behind us, if oil can at least not drop significantly. Wall Street is following oil and we can’t do much about it.

Finally, on Scott and his policy offerings, which have been criticized on a “where are they?” basis, I’ll give him until the Budget to come up with a good plan. Politically and economically we’re not ready for a higher and broader GST, as confidence has only recently made a comeback.

There are lot of conservative commentators out there who think we want a plan that sees the economy grow, jobs created, the budget head to surplus, our debt tumble and a conservative Government get re-elected.

Well, as an economist, let me tell you — that’s mythical and reflects that their knowledge of economics could be written on the back of a stamp!

At the moment, the economy is doing well. While I want to see a good long-term plan to achieve growth, jobs and a better budget future, doing too much now and threatening taxes and spending cuts now, would be dumb.

The Budget is the time and place for a good plan. If it’s a dud, then Scott will cop it and he’ll deserve it.

For now, ‘expert’, economically untrained commentators should shut up and go looking for unicorns!