To the expert sideline critics of my optimism - here's my response.

I know this will annoy the pessimists out there but the S&P 500 index — the most important stock market index in the world as it tracks the moneyed opinions on the top 500 companies in the US — ended overnight at an all-time high.

And at the moment, there are a few expert sideline critics having a shot at my optimism — albeit cautious optimism — and I’d just like to say: “I am not a money monster!”

This terrible tag comes from a great movie of the same name starring George Clooney and Julia Roberts. I guess I liked it because it focused on a popular media personality who had a money TV show called Money Monster.

I won’t spoil it for you but it involved a disgruntled viewer who lost a lot of money from a tip from the host of the show. But that’s where comparisons with what I do and what George’s character did ends.

You see, I’m a financial adviser so I’m careful with what I say. My experts on my show tell us what they like but it has to be understood that this is only their best guess. Thankfully, I can’t recall a stock that many experts tipped that really went pear shape but it could be possible.

Oh yeah, here’s one — BHP-Billiton — which has fallen from grace but it did become a buying opportunity when it hit $14 or so after being consistently a thirty-something dollar stock. It ended at $19.60 yesterday, so those who bought it at the lows are really laughing.

I bought it at around $16 because I like to see a turnaround trend proved before I dive in, so I’m pretty happy with my punt. And that’s what buying individual shares based on price trends can be. However, as long as you do it with good companies that you’re happy to hold for the long term, it can be an OK strategy.

One of my critics hit me with the following criticisms, which showed me that he had a risky approach to making money out of stocks. I try to reduce the risk and play a long game, which takes out a lot of the risk because a good portfolio of stocks, which is at least as good as the All Ords, returns about 10% per annum over 10 years, despite two or three bad years along the way. And half of that return comes from dividends, so that’s why I chase great companies that have a terrific history of paying dividends.

And I hold at least 20 stocks, so I’m not too exposed to any one company.

To the criticisms and my answers:

Question. What did Shane Oliver estimate the market to be by the end of this financial year and last financial year? I believe this was stated.

Answer. I don’t ask financial year guesses on the index on the show but I know he was around 6000 for the calendar year last year and got it wrong. I wanted 6000 last year and it did get to 5995 before the sell off, when it dived to 4707, but so what? Markets do this and there are plenty of experts who will tell me that we’re in a cyclical bear market (a short-term negative time for stocks) but this is inside a secular bull market, which means over a longer timeframe stocks prices go higher.

Question. And Peter, what did you estimate this to be?

Answer. I didn’t have one but I cheered the likes of Michael McCarthy of CMC who has a 5900 call for this year and I hope he’s right but I don’t care short term as I’m a long-term investor.

Question. Peter, will you tell people when to SELL? When will PE expansion be too much for you, even when compared to current interest rates?

Answer. When I’m scared enough to think a big market dumping is coming I will scream it from the rooftops but I could miss it but a lot of my experts will probably refer to it. That’s why the show is so popular — smart professional people telling my viewers what they are doing.

Insult: Peter, a mug could be right once in a while, and say repeatedly buy the dips, and you'll be right at times. I am certain you have been wrong plenty (refer to point 1).

Answer: I was clearly wrong hoping (not predicting) that our market would break 6000 but regular subscribers to my Switzer Super Report (which goes out to super investors three times a week) know that every time there has been a big sell off, I’ve argued it was a buying opportunity. Every time! And I’ve said it on my show so many times. I sometimes wonder if these critics watch the show consistently. I certainly did not see CBA as good value at $95 but at $73 I did and if it goes lower, I’d say it again. And if a crash happened in two years’ time and it went to $40, I’d buy it again and just cop the pretty good dividend. I generally buy stocks that pay good dividends and my capital can go up and down and it doesn’t worry me too much. I want my stocks in my super fund to pay a good dividend and I can control that much better than what the maddies on the market decide to do.

I’m wary of the big, bad prophets of doom and because stocks go up more years than not, I’m happy to fight the pessimists. My academic mate Steve Keen actually warned about debt concerns before the GFC and I wrote about it. Regular readers would have had a chance to see his predictions about a debt Armageddon. He actually won the US Paul Revere award for guessing the future right.

However, he’s been largely wrong on property and stocks since late 2008. While I gave him airtime, I railed against him ending all interviews with: “Thanks Steve. I hope you’re wrong.” And he’d reply: “So do I!”

I always look at both sides but because optimists win seven to eight years out of 10, I’m sticking with the good guys, though I reckon a really bad year one day will come along. It always does.

The chart below shows why I stick to stocks optimistically: 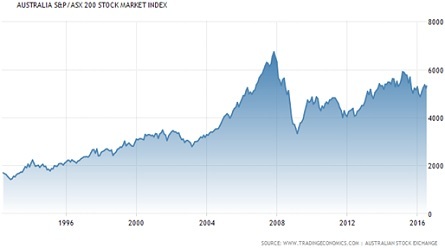 This chart even shows it better and it stops one year after the GFC. It shows $10,000 invested in 1973 in Australian shares, with dividends included, becomes $453,165. And that’s despite multiple market crashes and corrections! 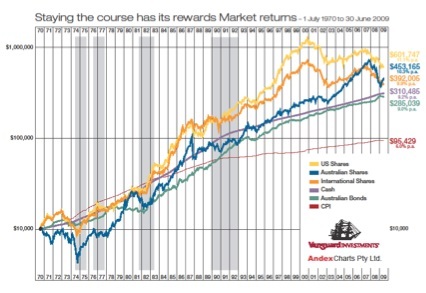 This chart is why I believe in stocks long-term. Personally, my core portfolio tries to emulate the chart above and I use a smaller percentage of my investible funds to try and pick some winners for an alpha experience, but that’s also for fun!

If you follow my example, rather than guessing what I stand for from watching many interviews on my TV show, you’ll see that I don’t want to be a Money Monster. I want to be a Money Master! And I want all my viewers, readers, website followers and even my critics to be money masters as well.

Thank God for critics as they make me write things like this!

P.S. By the way, the S&P 500 closed at a record high overnight and anyone scared off stocks by Steve Keen and his ilk since 2009 have missed out on a lot of wealth building.