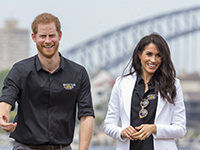 Don’t think I’m going soft because for the second week in a row, I’ve fallen under the spell of Harry and Meghan. Excuse me but I can’t ignore that their fantastically upbeat attitudes when dealing with the adoring public and their association with the Invictus Games have helped unleash a positivity that I have felt significantly, and I don’t think I’m alone in getting this vibe.

To be honest, I’ve been too busy to watch the Games but I am committed to catch up on ABC’s iView over the weekend. This resolution came about when I was listening to a Canadian participant called John, talking on radio, who told us about how he was ambushed while participating in a peace-keeping force and ended up pumped with seven bullets for his trouble!

He said he was “…in a dark place both physically and mentally” but his involvement in sport and then participating in the Invictus Games had changed everything.

And he knocked me out and sent tingles through me when he let out with total sincerity with: “I’m living the dream!”

Hell, I thought, if this guy can change his mentality after what he’s gone through, very few of us have no one else to blame but ourselves if we can’t tell others that “we’re living the dream!”

And like a chain reaction of positivity breeding more positivity I started to think about how you can help others change their view on themselves and their lives?

For my part, I want to influence my family, my staff and, ultimately, myself, because being happy is critically important for mental health and then physical well-being. And as I run a business, it all helps raise productivity. And when the business wins, the employer and employees win too.

Harvard academic Sean Anchor has made a career out of preaching the pay-offs from happiness. He makes a strong case for what he calls “positive psychology”.

He says most social scientists preoccupy themselves with the average person, consumer, business, etc. and then try to explain average behaviour. However, the Canadian John was an outlier and inspired me. So, like Sean, I want to see how to encourage as many people as possible to get positive and happy, which is also strongly linked to success!

Sean says when he turns on the news, he has to endure a horrendous ratio of bad and negative stories to good and positive ones. This says a lot about what dominates too much of the thinking of average people.

He says this creates the “medical school syndrome”, where first-year students read so much about illnesses and symptoms that they suddenly “realise they have all of them!”

He says psychologists are finding that “it’s not the reality that shapes us but the lens through which your brain views the world, and if we can change the lens, we can change every educational and business outcome at the same time.”

His research has shown that we find it difficult to remain happy from great events in life, such as getting into Harvard, seeing your first child born or getting that job you’ve always wanted.

Your brain reverts back to the many day-to-day challenges of life, which, when you look at them in isolation, seem to be such small beer against the less numerous great achievements in one’s life.

Sean says the external world is 10% important to long-term happiness but the way your brain processes is 90% crucial. So, working on how you process your world is vital to your happiness and, ultimately, your success. I link these two great feelings — happiness and success — so it becomes a greater reason to really want it and that might help you make the changes necessary to get both these priceless prizes!

Sean and his Harvard researchers found that 25% of job successes are explained by IQ, while 75% was due to “your optimism levels, your social support and your ability to see stress as a challenge rather than a threat.”

Unsurprisingly, he says that most of us and most educational bodies and businesses teach the wrong formula for happiness.

It goes like this — if I work harder, I’ll be more successful and if I’m more successful, then I’ll be happier. But Sean reckons we get temporarily happy with success, then that negatively-programmed brain ups the ante telling you that you have a good job but now I have to have a better one! The same goes for houses, cars and for some — partners/spouses!

Sean Anchor propagates the inside info that if you can get the brain programmed for positivity, you can gain a “happiness advantage” and the science says when the brain is locked into the positive, “your intelligence rises, your creativity rises, your energy levels rise and in fact what we found is that every single business outcome improves.”

Happiness unleashes a body-created drug call dopamine, which turns on all the learning centres in your brain. And his work says these five daily steps help you rewire your brain to take it from the negative to the positive. And if you can do it, the happiness/success dividend will be your reward and you might readily say, like John the Canadian peace-keeper, that “I’m living the dream.”

What are those five steps for lasting positive change? Here goes:

1. Write down 3 new things you are grateful for.

2. Write down one positive experience you’ve had over the past 24 hours.

5. Do random acts of kindness by say simply writing an email thanking people for something.

Sean says if you do this for 21 days in a row, you can rewire your brain. If you really want to say “I’m living the dream”, you have to commit to this 5-step programme for happiness and success.

It’s a huge challenge but I’d argue that the prizes look very attractive.