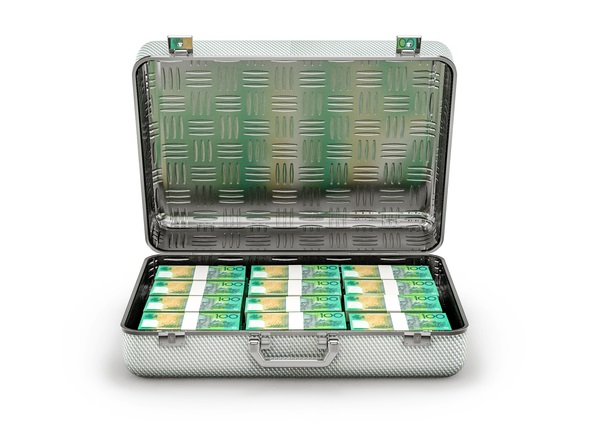 If you prefer to be rich, show some interest in your money this week

Over the next five days, you should become wealthier but the question is, by how much? On a daily basis, we tend to care about other things like our families, our relationships, our jobs, our footie teams, and what’s for dinner!

But this is the week when it might be wise to have a little think about your money.

You mightn’t be a 24/7 stock market or superannuation watcher but if ever there was a week that you should show a passing interest in shares, this is the one.

In case your distractions or your media service failed to let you know that we’re in reporting season, well, we are. And it’s the biggest week, with around 100 major companies reporting, including big names like Fortescue and BlueScope on Monday, Oil Search, BHP and Amcor on Tuesday, Worley Parsons, IAG and Woolworths on Wednesday, Scentre Group (the old Westfield shopping centres) and South32 on Thursday and Qantas on Friday.

Over the past two weeks, we’ve seen some of the most important companies in the country deliver their show-and-tell on profits and their outlook for the company, and the story has been OK, without being overwhelming.

I want it to be overwhelming to drive up share prices, build up my super balance, see healthy, thriving companies employ more and more Australians, which will help the Government’s tax collections to bring down the big Budget Deficit and reduce our indebtedness going forward.

Great company profit news will underpin a stronger growing economy that will breed higher inflation and higher interest rates, which would be a nice reward for those savers and retirees who depend on term deposits. At current less-than-3% levels, it’s nearly impossible for some people to build or preserve their wealth if they’re not prepared to go into the stock market.

And that’s why this stock market week is so important in so many ways. You see, there are a lot more people exposed to the stock market, either directly, or indirectly through taking more risky options with their super, than ever before. So we need to see gradual improvement in the health of the companies that drive economic growth of this country, their own profits, then share prices, which then builds up super.

AMP’s chief economist Shane Oliver summed up reporting season so far, and this is what he told us: “We are now about 45% through the June half earnings reporting season and results remains mixed.

As someone who has a dividend growth fund called SWTZ, the last point from Shane makes me happy, but I’d love to see the outlook statements from the head honchos of our top companies get a bit more positive.

The resource companies saw their prices for iron ore, coal and other stuff they dig out of the dirt, spike in the reporting period and it came after they’d chopped their costs because they were worried about the end of the mining boom. Well, there hasn’t been a new boom but the mining bust was U-turned over the reporting season. That’s why resources profits are tipped to be up 132%!

We now need non-resource companies to start showing more strength and profitability and it would be good if we saw a trend towards that this week. It’s not likely, at least to the extent that I’d like, but I just want to see a positive trend that will give credibility to my tag as the oracle of optimism!

And here are two charts from Shane Oliver, which actually do help my optimism: 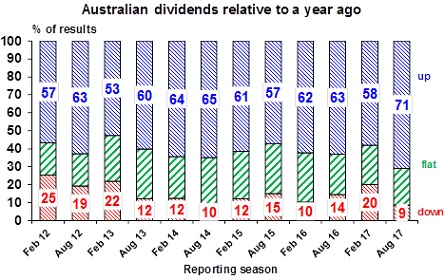 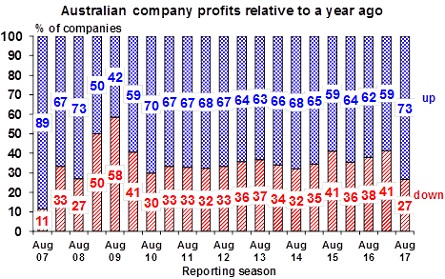 The top charts shows 81% of Aussie companies have either kept dividends the same (10%) or raised them (71%).