I owed Bob Hawke but he owed me too!

I owed Bob Hawke and he owed me, but in reality I owed him a lot more! This was my calculation as I reflected upon the legacy he left us and me personally. That said, I reckon I gave him something valuable as well.

To me, Bob was like the great entrepreneurs of our time — Virgin’s Richard Branson, The Body Shop’s Anita Roddick, Amazon’s Jeff Bezos and Apple’s Steve Jobs — whose strength was knowing what consumers wanted.

Like them, Bob knew what was important to the Aussies he wanted to lead to sell himself and his vision to them. And that was largely behind his landslide win in the 1983 poll, which was called as a snap election because the Coalition’s Prime Minister, Malcolm Fraser thought he would “catch Labor with its pants down”, as he once promised.

Labor had dumped its leader Bill Hayden in 1983 for Bob Hawke, and Fraser thought he could snatch a win, despite the fact we’d been through a recession under his and his Treasurer John Howard’s watch.

The Labor victory ushered in a period of economic reform that no one expected from a Labor Government where the deregulation genie, as a force for change, was allowed out of the bottle. It remains on the prowl enforcing a new economic paradigm on everything it comes in contact with even today.

And you can thank or blame Bob Hawke and his Treasurer, Paul Keating, for the new economic world we live in. Supported by one of the best political line-ups in Australian history, Labor floated the Aussie dollar, deregulated the banking system, introduced the Accord, which saw unions become reasonable on wage claims linking them to productivity, tax cuts and other social reform policies. Tariffs were cut, the likes of CBA and Qantas were put on a path towards privitisation, and superannuation became compulsory.

Those changes explain why we fly overseas cheaper than ever before, why young Australians will retire with more than $1 million in super, in today’s dollars, and why the likes of John Symond was able to appear in 1992 offering to undercut the banks on home loans by 2%.

That led to enormous competition for the banks and millions of Australians have materially benefited from the deregulation changes that Bob Hawke signed off on.

Similarly, the trade protection reforms combined with an ACTU led by Bill Kelty, which was more in touch with the real world than ever before, helped create the competitive Australia that defied the forces of recession for 28 years that so many equivalent economies gave into. Unfortunately, too many of us take this growth for granted and don’t properly respect those politicians, entrepreneurs and business leaders who worked together to deliver this economic miracle of 28 years without a recession — a world record!

And that delivered 26 years of falling unemployment, which shouldn’t be forgotten.

The chart does show that the “recession we had to have” was a blot on Hawke’s and Keating’s copybook but it was a time when the world paid a price for not handling the new world of deregulation properly.

However, compared to the US, our economy (which was overhauled by Hawke and Keating first and later Howard and Costello) has been a much better place for workers if we measure it in terms of the likelihood that you might lose your job!

I personally have grown my wealth, my business and my brand name in a business era very much defined by the longest-serving Labor Prime Minister.

So what was my role in Bob’s success? I think the media played a very supportive role in explaining that the gutsy policy changes pioneered by Hawke and Keating, which resulted in one-off big surprises, for example when the dollar fell out of bed in 1985 to under 60 US cents, following Paul Keating uttering the words “banana republic” on the John Laws radio programme, ultimately would reap nice dividends. 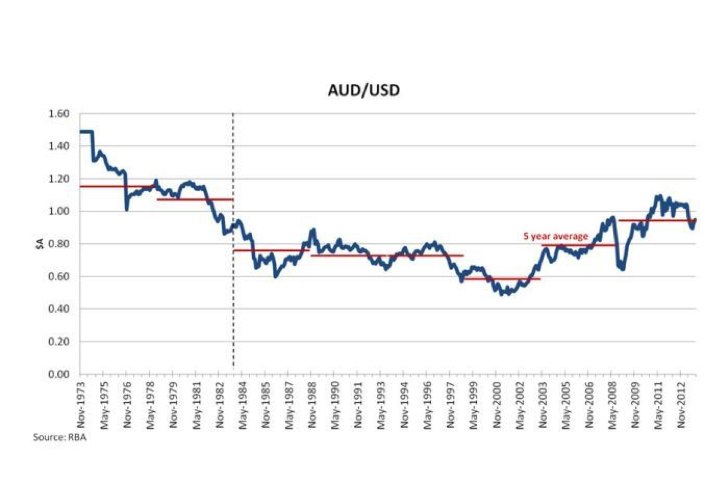 The media helped explain what Hawke and Keating were up to and how it would affect the lives of Australians. And on the flipside, someone like me was a beneficiary, with these reformers ultimately creating the business and brand name I had to have!

Bob and Paul helped me and I helped Bob and Paul but without them, I might have stayed in academia teaching economics and business rather than going out and actually doing it.

PS: A few years back I interviewed Bob and Blanche on my Switzer TV programme on the Sky News Business Channel. I was surprised how romantic and touchy, feeley Bob was with Blanche and I made a point of it on air by saying: “I’ve never seen you so romantically inclined before…”

His reply was classic Bob Hawke. “Oh, you need to get out more often, son” he replied.

Thanks Bob, it’s been nice knowing and working with you.