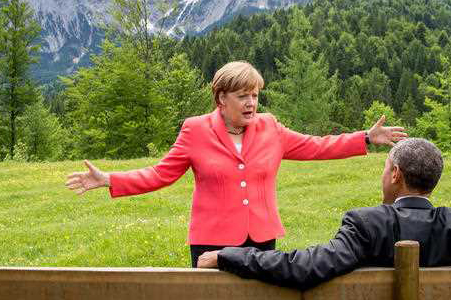 I am watching women and I hope I love what I see!

In case you don't know I am overseas in Athens and one of my goals was to interview the Greek Finance Minister, Janis Varoufakis, and while I wait for word about whether it will happen — he is kind of busy at the moment after Greece failed make its 300 million euro payment on Friday — I am keeping my eye on women!

No I am not a mid-life crisis male and I’m not excessively testosterone laden but I am an economist who is learning to avoid ignoring the importance of women to the global economic recovery.
CNBC recently pointed out that Hillary Clinton, Angela Merkel and Janet Yellen were “women close to retirement age who are changing the world.”  So, not only women are important forces in world economics, they will become even more pivotal to economies and business “as more and more women push forward in their careers after turning 55.”

As the ‘granny track’ where a women in her 50s heads for home to look after grandchildren, becomes a less favourable option and women stay on in the workforce, it’s great news for the childcare industry. Go long childcare stocks, looks like sound advice.

In fact, some jokers think 65 will eventually be forgotten as a retirement age and it will extend into the 70s and even the 80s in the not too distant future.

The CNBC report argued that “much of the recent recovery in the labour market in both the US and Europe can be attributed to increased input from older women.”

Sloan Center analysis found that in the US, “the overall gain in labor-force participation among workers age 55 and older between 1975-2010 was driven by the increases in women working, up from 23.1% of the 55+ workforce in 1975 to 35.1% in 2010.” And post-GFC, the number of working women in the UK aged over 55 have increased at an increasing rate.

A PwC report argued that “the skills of women over 55 at senior management levels have gained in the workplace mean they are potentially the most effective at changing businesses.”

The same report found that as strategists for transformational change in businesses women over 55 show an aptitude that shows up their male counterparts.

Today we get to see the latest Westpac consumer sentiment number and I hope that the Budget will have put a big positive spike into the results. The last figures for May showed men and younger Australians had gone nicely positive but women remained terribly negative. They were holding back a recovery in consumer confidence and so this is why I will be eyeing off women in today’s numbers.

It was great to see the NAB business confidence at a 9-month high going from +3.4 to +7.4 on Tuesday and I bet women had a decent hand in reacting to the Treasurer’s pro-business Budget.

As I say, I am watching women carefully, if only for economic reasons, and it's a job I don’t mind! Go women!