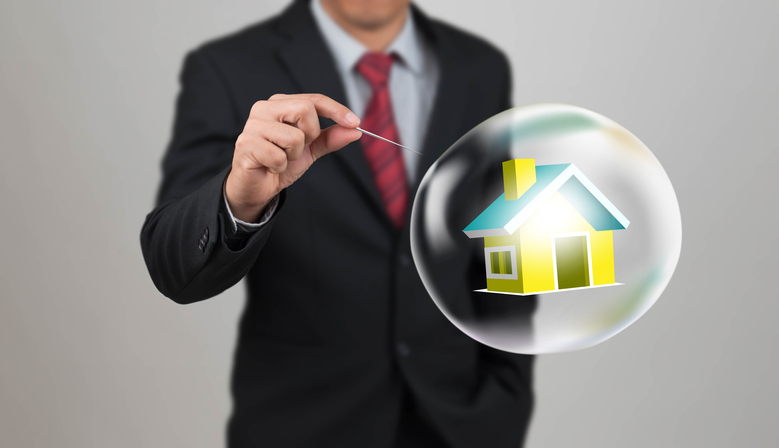 How scared should we be about a housing bubble?

It’s Monday so somewhere in Australia there’s a property story out there, either talking about exceptional clearance rates at auctions (especially in Sydney and Melbourne) or else it will be a “we’ll be ruined” opinion piece because of the spectacular rising prices of our beloved bricks and mortar assets.

Last week, it was the OECD that was scaring the pants off us, linking house prices to our debt to threats to the economy. The theory is that if the economy faltered for a myriad of reasons, we’d be terribly exposed. However, AMP Capital’s chief economist, Shane Oliver has reminded us that these types of Achilles Heel warnings “have been issued continuously since 2003 and yet the property market keeps on keeping on.”

Like me, he sees a general house price crash but what might cause it? Try these developments:

Late last year, Shane Oliver made an expert comment on how vulnerable we are to these rising house prices and this is what he found.

First, Australian housing is expensive and “according to the 2016 Demographia Housing Affordability Survey, the median multiple of house prices in cities over 1 million people to household income is 6.4 times in Australia versus 3.7 in the US and 4.6 in the UK.”

Second, we’re at the high end of the OECD for this measure but let me remind you that we’re the most highly urbanised country in the world and our pay rates per hour have been the highest in the world. Full-time earnings in Australia averaged A$78,832 a year in 2016, while the USA is around US$55,775.

Second, our ratio of house prices to incomes and rents is at the high end of OECD countries and has been since 2003. This chart shows the story: 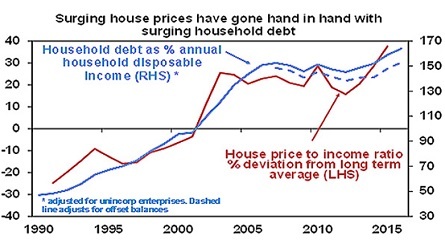 Third, this jump in borrowing has been linked to the slump in interest rates that has helped buyers secure money for property that has been undersupplied. Oliver says there has been “a cumulative shortfall of over 100,000 dwellings relative to underlying demand had built up by 2014.” You can blame councils and state governments for this but you have to remember the latter benefits from house price surges via stamp duty and other charges.

Fourth, the rise of more investor-oriented older (and even younger) Aussies, combined with the influx of foreign buyers, has added fuel to the fire. Last week, CNN came with an extraordinary story (that needs to be verified) but this is what was reported: “An estimated 11,000 millionaires moved to Australia in 2016, according to a new report by wealth research firm New World Wealth. That compares to 8,000 millionaires who moved Down Under the previous year.”

Fifth, the combination of negative gearing related tax deductions, capital gains tax discounts, low super balances for baby boomers but valuable principal properties, fear of the stock market and our love of property has meant there are more investors in the property market. And this has helped drive up prices.

But does all this mean a crash is coming? Could it not be just a notable but not dramatic general collapse, with some more significant declines in property areas known for volatility, such as the Gold Coast?

Oliver doubts a crash scenario because there aren’t oversupply issues right now and “despite talk of mortgage stress, the reality is that debt interest payments relative to income are around 2004 levels.”

He says lending standards here are not like those of economies that face pricked bubbles in housing. And, he points out that the house price surge has been mainly Sydney and Melbourne, which I will throw in are consistently named as some of the best and most livable cities of the world! “While property prices have surged 60% and 40% over the last four years in Sydney and Melbourne, they have fallen in Perth to 2007 levels and have seen only moderate growth in the other capital cities,” Oliver points out.

This is his final view on the matter and it makes sense:

“Nationwide price falls are unlikely until the RBA starts to raise interest rates again and this is unlikely before 2018 at which point we are likely to see a 5% or so pullback in property prices as was seen in the 2009 and 2011 down cycles. Anything worse would likely require much higher interest rates or recession, both of which are unlikely.”

This is bad news for property alarmists and I hope Shane is on the money.