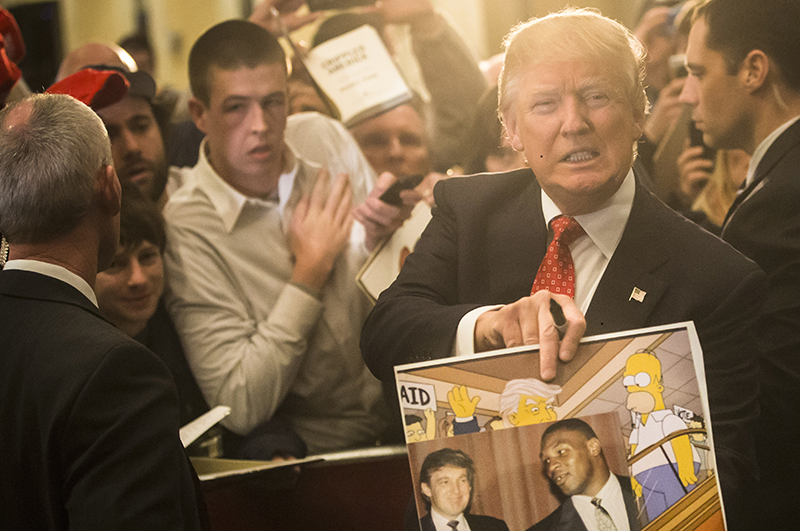 How Homer Simpson helps us understand the US president

Stocks surged higher on another tweet from Donald Trump and yep, it said good things about Xi Jinping and a possible trade deal. The news got me thinking about  those who hate or love Donald and how out of touch both groups might be.

If there was one thing the May 18 election result taught all of us who are open to learning stuff, it’s that what we think is rational and the view of a majority can be way off the mark. It’s something that democracies and elections teach us.

As young university student, I can remember being outraged when the Whitlam Government was sacked. It was a threat to my democracy! Well, that’s the way I saw it, as a cock-eye optimist with long hair and a beard!

Attending rallies where a young Bob Hawke was saying all the things that one day would make him the next Labor PM, who’d erase the economic nincompoop tag for his party that poor old Gough created, a young starry-eyed Aussie could believe that Gough could ride again at the 1975 election that Malcolm Fraser won outright.

On the Sunday after that dreadful election night for cockeyed optimists, my girlfriend, also an idealistic law student (with a part-time job at a Chinese restaurant) talked to customers about the result and was surprised that many diners were actually out celebrating the win! Some were ‘beloved’ customers who left big tips and when she asked why they were happy to see the end of Gough, apart from their view that he was “ruining the joint”, they also liked the tax cuts Malcolm was offering!

I learnt many things that weekend when the Coalition won in a landslide. Debating the outcome with a mate who was programmed to be a right-thinker, I recall one of our more emotional Labor-oriented friends saying to my mate that “it was a coup!” To that my mate replied: “But by God it was a popular coup!”

Donald is annoying the you-know-what out of me with his tweets and its market effects and, as someone who helps others build their wealth, he has made me be as objective as I can be about what he’s up to. You might not like his ‘mad’ methods but there could end up being method in his madness that results in a fairer outcome for the Yanks, who were being screwed by the Chinese on many trade matters.

Apart from his overall bullyboy attitude, the only issue I really dislike is that he has been prepared to gamble on what happens to world economic growth by invoking his trade war for his own US-specific, self-oriented purposes. This shouldn’t be a surprise given his history but I’m prepared to look past his unusual and hard-to-admire ways, for the potential economic outcomes he should pull off.

Overnight, the Dow was up 353 points (or 1.35%), while the broader S&P 500 put on nearly 1%. And the Trump tweet that launched millions of buy orders was: “Had a very good telephone conversation with President Xi of China. We will be having an extended meeting next week at the G-20 in Japan. Our respective teams will begin talks prior to our meeting.”

This all comes as Wall Street was more focused on the Fed meeting on interest rates that starts today, where there’s hope that the central bank’s communique says cuts are coming, if they’re needed.

“The market wants to hear words that err towards the Fed cutting rates in July,” said Jennifer Ellison, principal at BOS. “If there’s language that sounds like they’re backing off from that, it’s going to spook the market. Part of the reason the market is up today is because of the trade stuff, but also the anticipation around the Fed continuing to be very dovish.” (CNBC)

Only 20% of the money market expects a rate cut this week and the Trump tweet today probably reduces the chances of a cut in general but the Fed boss, Jerome Powell, has pressure on him to say the right things after the rates decision.

In what looks like a headline that our RBA boss, Dr. Phil Lowe, would never see from an Australian Prime Minister nowadays, CNBC led with: “Trump on demoting Fed Chair Jerome Powell, day before rates decision: ‘Let’s see what he does.’

That’s incredible pressure and is only something you’d hear from someone like Donald in a modern Western democracy. I could imagine Vladimir Putin or Rocket Boy in North Korea being able to pressure officials to do the “right thing” but I’m sure it wouldn’t be publicly expressed like the US President does.

He’s an absolute one-off but if he pulls off a trade deal and avoids a recession and stock market collapse, the quiet majority who vote nowadays could give this very unusual guy a second chance to lead the USA in next year’s election in November.

We’ve all heard this many times before but when it comes to Donald Trump stories, it just seems so appropriate to observe: “Only in a America!”

Call me too-influenced by TV but I can’t help linking Donald to Montgomery Burns in The Simpsons.