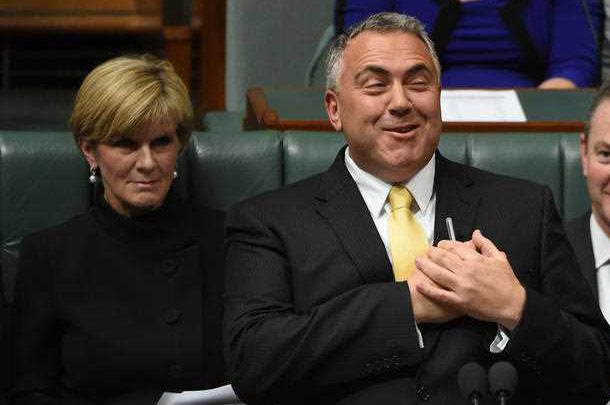 How fair is it to compare Joe Hockey to Joe Public?

Fairfax has it in for Treasurer Joe Hockey, with political editor Mark Kenny telling us that Attorney General George Brandis could be heading for the chop and suggesting Joe’s head could be taken to the block ahead of him!

To me in Greece this seems kind of weird, given the popularity of the most recent Budget. Against that, Joe has apparently been too candid, which is what he often is, so the media knives from the Fairfax drawer seem to be planted in the Treasurer’s back.

After 30 years writing in the media, I know picking on PMs and Treasurers is standard newspaper selling stuff but we’ve hit a new low when you find fault with a Treasurer who happens to have been a successful real estate investor.

What? Would you (or the young Fairfax journo who went for Joe in his pretty pathetic piece) want a Treasurer who’d been a money nincompoop his whole life?

Believe it or not, this is how he started his story: “Joe Hockey is doing a lot better than Joe Public, national economic data shows.”

Well, der? Isn’t comparing a man so successful so as to be this nation’s number one number cruncher (as well as a lawyer, a former financial institution high flyer and a long-serving member of this country’s parliament) to someone called Joe Public so dumb that it should’ve been rejected by the editor? In the old days, it would have been. Nowadays if it insults, bares boobs or horrifies then it gets into newspapers or websites. We haven’t come a long way, have we?

Why doesn’t the writer compare Joe Public to Greg Hywood, his boss at Fairfax? I bet Greg’s a lot better off than poor old Joe Public.

The premise of this second-rate tale was that home ownership is “one of the great economic divides”, which of course ignores other ones, such as who your parents are, how hard you worked at school, your goals for success and where you want to live.

Most Sydneysiders can buy a house or a home unit but it might not be where they want to live. Your circumstances and your attitude might force you to drive a long time to work and might be preventing you from living close to the CBD or the great beaches of Sydney.

And while I was in Greece, this Fairfax journo pondered: “As many have remarked this week, Treasurer Joe Hockey is firmly planted on the ‘have’ side of that schism, causing observers to question his empathy for Joe Public.”

What? I doubt whether there have been many politicians who haven’t been reasonably well off to very rich. Labor’s Paul Keating (another Treasurer and someone who hardly ignored Joe Public) collected French clocks, wore Italian suits, renovated terraces in trendy Elizabeth Bay and lived in upmarket Queen Street Woollahra was never given a going over like Joe has been.

The story listed Joe’s properties and what his wife owns. Rather than being something Joe Public should be annoyed about, it should be something that should stimulate the smart Joe Publics to aspire to.

This stupid story says his properties are worth $10 million but we weren’t told what his debts are, so we don’t know the net value of these investments. Anyway, we don’t need to know this stuff because it’s not our business, unless you want to hate Joe for being successful, being born at the right time for Sydney real estate, because he had brains, because he worked hard and because his parents sacrificed to send him to a good school and because he rewarded them by being successful!

This stupid story lets us know that Joe earns over $300,000 a year but tells us something we don’t know: “Joe Public settles for a lesser wage. Australian Bureau of Statistics data shows the average full-time Australian worker earns $1477 a week, or $76,804 a year – about a fifth of Hockey's base salary. For couples with children, NATSEM modelling indicates median household income is $128,466 (slightly higher in Sydney and Melbourne) – but only $87,502 among families who are renting.”

A bottom line conclusion is that investors are causing the trouble with Sydney house prices, but this ignores Asian buyers and the supply problems in the suburbs where people want to live.

Right now, many media outlets want to punish relatively successful retirees by taking away pensions and taxing their super and pension funds more heavily. However, if super becomes less attractive, many of these retirees will buy property outside of super.

It’s funny, I guess this young journo at Fairfax hasn’t learnt the lesson that you can’t stop successful people and you have Buckley’s chance of making someone like Joe Hockey on par with Joe Public. In fact, Joe Hockey should be a role model for Joe Public, not held up as some apparent enemy of the people.

Joe Hockey, like most of us, started life as Joe Public and the same could be said of Paul Keating, Peter Costello and John Howard.

All these guys were aspirational. They worked hard. They didn’t come from wealth and became exceptional people. This isn’t something we should sneer at, even if you want to get a headline-grabbing story.