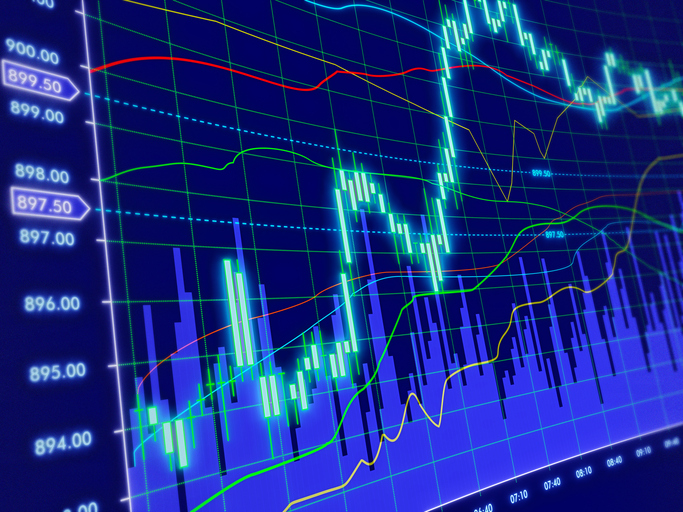 How do you get wealthier?

What advice do you give to a 21-year old who has an investment property, earns $120,000 a year and still has $20,000 available for investment? And who wants a tax-effective strategy!

These are the types of questions I field on my Talking Lifestyle radio channel show called On The Money. It goes to Sydney on the old 2UE-954 channel, the old Magic channel in Melbourne at 1278 on the dial and in Brisbane on 4BH’s 882.

Yesterday, I looked at what a new Tony Robbins’ book called Unshakeable taught. The book explores many things but four big issues are given prominence.

They include the idea of investing early and letting compound interest build up your wealth. Second, there’s no trying to time the market but to spend time in the market. Third looks at how to make sure you don’t pay more than 1% because, over time, fees act like compounding but in reverse!

Finally, Robbins runs the story that most financial advisers recommend: be diversified.

These are all good premises to build wealth but I’d like to share with you a graph that explains why I like the scary world of stocks. 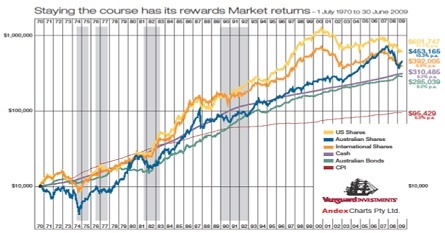 And it will go higher before a crash comes, as it often does. If you follow the blue line, you see many scary crashes and corrections but see the uptrend of the blue line, which shows what happens to Aussie stocks.

The yellow line shows what happens to US stocks. This has exploded even higher compared to Australia, with the Dow Jones index going as low as 7,062 in February 2009 before it rebounded to the 20,878 we see today! That was a 195% gain!

Imagine if that young boy had invested his $200,000 in an exchange traded fund for the Dow Jones index. He’d now have over $400,000 because he would have received dividends as well!

Now that would have been too undiversified and no financial planner would have recommended that. However, given his age, he could be 100% invested in a range of stocks that take in an index, such as the Dow Jones or S&P/ASX 200, because he’d get diversification by having so many stocks from different sectors.

For our youngster with $200,000, a planner might use $100,000 as a deposit into an investment property and $80,000 into an ETF — exchange traded fund — for the overall stock market index such as IOZ or STW, which are ETFs listed on the Stock Exchange. If the market rises or falls 2% in a day, you’re 2% richer or poorer (minus a small fee) but they also pay collective dividends for the 200 stocks in these ETFs.

We created the Switzer Dividend Growth Fund (SWTZ on the stock exchange) for those who like dividends. Our fund manager puts together about 50 reliable dividend-paying stocks. This won’t shoot the lights out in terms of price but should give a reliable stream of dividend income each quarter.

The planner then might put $20,000 into term deposits so the young investor can access cash if he needs to when the term deposits roll off. As rates are low, the planner would take shorter terms, as he’d expect rates to rise over the next few years.

If you explain to a young person that stock markets crash every 10 years or so but as long as you invest in quality companies (15 to 20) or invest in an ETF (or even a number of ETFs that could include ones for the US stock market indices), then you’re likely to build wealth that grows at 10% or better each year.

So let’s look at our youngster at age 18 with $200,000. If he buys say IOZ and history repeats (of course, there can be exceptions when markets rise slower or faster), then his money will double every seven years.

Of course, there would be tax to pay so a planner might suggest he invests it in super but that would mean he wouldn’t be able to access it. A planner might put some in super or work with an accountant, who might recommend a trust arrangement to keep the taxes as low as legally possible but still maintain potential access to the money.

All this shows the power of the stock market and getting wise advice at the right time. I always advise people who want to build wealth that you need to look at growth assets, such as stocks and property. And sometimes it’s good to start when economic times are rough.

Warren Buffett advises to be greedy when everyone is fearful and fearful when everyone is greedy. He also recommends that if you aren’t like him — a masterful investor who does it 24/7 — then an ETF is the way to go. They are low on fees and the ones I’ve talked about are diversified.

I know many people are afraid of stocks but they have done them badly, without good advice. Exchange traded funds are simply funds that you can buy into and out of on the stock exchange. Their arrival in recent times has made it easier for people to build wealth.

By investing in good assets, such as property where people want to live and in stocks of companies that people want to do business with, you can build wealth. Just give it time and faith in the investing process explained above and guess what? You will become wealthier.

This is investing. Anything else that promises riches faster is punting and that’s where the losers outnumber the winners!