On Tuesday, the RBA boss Philip Lowe tried to scare the pants off people overbidding on Sydney and Melbourne houses. But what if this jawboning scares the wrong people?

Housing hysteria is ridiculous but it just might work

On Tuesday, the Reserve Bank boss Phil Lowe tried to scare the pants off silly people overbidding on Sydney and Melbourne houses. It’s called jawboning and it’s meant to create a media storm to create a big effect. My fear is that it might work too well!

At the last election, Labor was right to argue for a more aggressive attack on housing, with Sydney house prices up 18.9% for the year, while Melbourne prices were 15.9% higher!

Labor always seems to take a sledgehammer to crack a nut. Recall the mining tax at the end of the mining boom.

Even the carbon tax was a nice idea for the environment but to add a tax to a post-GFC struggling economy was a little too left wing.

I never imagined we’d be praying for inflation and that interest rates in many parts of the world would be negative!

You know, a lot of economists thought house price growth would start to slow because house prices over the past two years have been crazy but the ridiculous prices people pay are still being paid. This chart from Core Logic shows it all:

The reason why the RBA boss started a jawboning storm with his speech in Melbourne is that he’s worried about the people who keep bidding up prices at auctions. He needs prices to come off the boil. And he needs to warn banks about their lending.

Yesterday, I pointed out that in the good old pre-GFC days, he would simply raise rates agressively to cool down a too hot real estate market. However, the economy is doing OK but isn’t strong enough to cop a rate spike to simply fix Sydney and Melbourne madness.

And that’s the point. The problem is in two cities and Phil doesn’t want to sacrifice Australia for Sydney and Melbourne. The chart below again shows why: 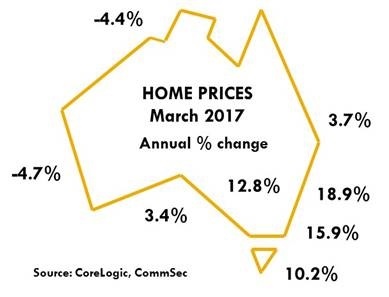 If Phil raises rates to right the ridiculousness in Sydney and Melbourne, then Adelaide, Brisbane, Perth and Darwin (as well as regional areas) would be screaming “What about us?”

Hobart has just had a good year and would feel robbed, while Canberra is starting to catch the Sydney-Melbourne condition but it’s early days, with home prices up 12.8%.

So a blanket rate rise would be injudicious. And that’s why Phil started using his jaw to try to talk down the house price rises created by people who are paying too much.

Undoubtedly, the Budget will bring changes to the capital gains discount, which now is 50% but could be cut to 35%, given Labor wants it at 25%. Note that if this is tweaked for property, it will apply to shares as well. And given our stock market has been a chronic underperformer since the GFC, you can understand why the Government hoped that price rises would scare buyers out of Sydney and Melbourne weekend auctions.

I have to say the housing hysteria that followed Phil’s jawboning worked, with media personalities becoming prophets of doom, fearing that young people taking out big home loans will be virtually eating canned dog food before losing their homes, if interest rates should rise!

This is what Phil wanted — fear. However, it could be scaring the wrong people! This could batter consumer confidence and do nothing to help retail spending that remains ridiculously low.

Seriously, if any Aussie has overborrowed and fears rate rises might condemn them to dog food, debtors jail or some other social disaster, then do the following:

It's interesting but this expected change to capital gains tax is a bit late because people who’ve bought over the past year or two in Sydney and Melbourne are less likely to see much gain because they’ve paid too much.

And taking away negative gearing on existing homes (as Labor advocates) would, undoubtedly, send Perth and Darwin house prices down evern further, which would be bad for consumer confidence in those cities and elsewhere.

Last week, I suggested the ‘wild and wacky’ idea of a negative gearing ban on future purchases only in Sydney and Melbounre for one or two years. It’s an odd, tailor-made idea but it might make more sense if you don’t want to burn the economy, while hosing down the ‘on fire’ property markets in the country’s largest capitals.

The PM and the Treasurer might need to think outside the square on this one. However, as Edward de Bono explained to me over a decade ago, lateral thinking is the hallmark of exceptional high achievers.

We can’t afford to kill the economy to simply stop idiots overpaying for property, as our economy is on the mend. On my radio program yesterday, I interviewed Perpetual number cruncher Matt Sherwood, who has been nervous and negative about the Oz economy for five years. He’s now turning positive and expects our economy to grow faster than 3%.

This is the magic number where unemployment falls, Budget Deficits drop and business investment is stimulated. We can’t lose these possibilities because some homebuyers don’t understand what Warren Buffett has told us: “Be fearful when others are greedy and be greedy when others are fearful.”