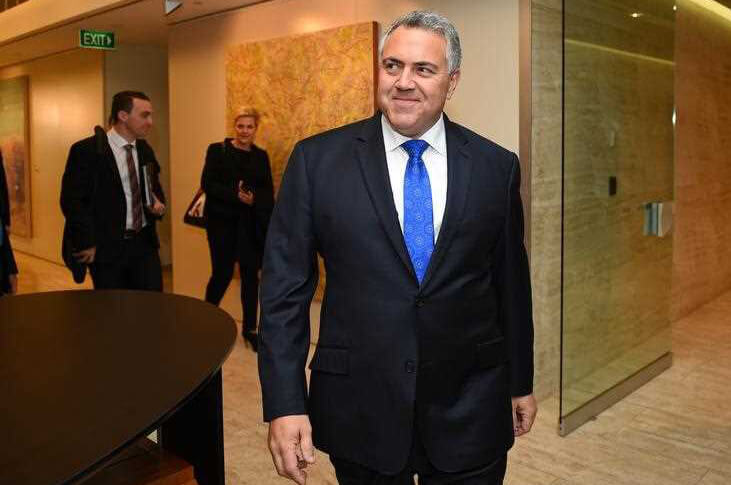 Hockey to be dumped! Truth or newspaper crap?

Breaking news — the AFR has led with a positive economic news story on the front page! Don’t let me miss the opportunity to praise the paper for helping the economy by simply doing its job, which is reporting what’s happening and not seizing the most negative headline imaginable to scare people into buying the newspaper.

The SMH has come up with one this morning, telling us the Treasurer Joe Hockey could be sacked, as a sacrificial lamb, by Prime Minister Tony Abbott to shore up his leadership. The so-called sources are unnamed ministers but the PM’s office is denying that this axing and a March election are on the cards.

Stories like this not only rattle the Government’s confidence but the thought of the Treasurer being shown the door is not good for consumer and business confidence. We saw that after Joe’s first Budget was held up in the Senate and a lot of it was not passed.

Over that drawn out period of political stalemate, both business and consumer confidence dived.

Then, after this year’s Budget, we’ve seen both business and consumer confidence spike and we’ve even seen the likes of JB Hi-Fi and Harvey Norman, which both reported good profit results, single out the role that Hockey’s $20,000 immediate tax write-off has played in helping their bottom lines.

So some ministers in the Abbott Government think it’s time to sack a guy, who admittedly has had an up and down record as Treasurer, when he’s on a roll?

And they want him to go when he has had a role, along with the Reserve Bank, in seeing a front page headline in Saturday’s AFR that went: “Consumer recovery tipped: major retailers show lift.”

This was actually an interpretive story that a good finance newspaper should be up for, rather than the predictable, negative, unhelpful stories like the ones they’ve run about a housing bubble in Sydney for over three years!

Last week I was gobsmacked when ABC radio ran a news story saying that the business investment figures were the worst since the 1990 recession, while CommSec’s Craig James led as the headline in his daily note with: “Biggest lift in investment plans in five years.”

Sure, you can look at these comprehensive investment figures and take any angle you like, but my concern is that the ABC and Fairfax generally go for the worst-case scenario. And what worries me more is that I suspect they’re doing it because they hate the Abbott Government. They’re playing an economic role in hurting our economy by inhibiting confidence.

I like Joe Hockey and have known him for years but as an objective commentator, I criticized his first Budget for being too tough when the economy was clearly slowing. However, few people agreed with me, especially political commentators and some conservative politicians, who all said a Treasurer has to go hard in the first year, to get on top of the deficit and debt problem, so he can go softer in the Budget closer to the next election.

I reminded these people of what happened to John Howard when he was Treasurer to Malcolm Fraser in the early 1990s. John shot for a budget surplus but the economy was hit by a worldwide recession and the Budget went into a big deficit and the Hawke Government won the election of 1993.

There was an economic summit last week put on by the AFR and The Australian newspapers, which was unique and the initiative should be applauded.

I wasn’t invited but if I was asked to speak, I would have allowed others to bag politicians, who won’t embrace hard measures and who always fight good ideas on party lines. I would have let the unions and too cautious business leaders be bagged for not embracing change and lacking courage. My contribution would have been to ask why the media is so determined not to help the economy recover? Its preoccupation with the negative has become a pathetic newspaper selling strategy, which clearly isn’t working.

If something is bad, wrong or negative, then I praise newspapers for telling us about it but when their stories are created from the negative and sensational point of view that damage confidence, the economy and job creation, then it’s disgracefully unethical.

Economically the Abbott Government is heading in the right direction but they need to stop silly news stories, such as the one on the weekend involving visa and identity checks in a country where there is no law that says we have to carry papers to prove who we are.

The PM needs to communicate better with the country, like he does when he’s with you one to one. He has to kill stories that he’s set to KO his Treasurer. Burying Joe won’t help him. It will actually hurt him.

One final irony. The report says Joe could be gone if the Coalition loses the Canning by-election on September 19 but I bet the people of Canning don't dislike Joe. In fact, the recently deceased Don Randall was an MP who brought on the leadership spill earlier this year and at the time he said it was because his constituents didn’t like the PM!