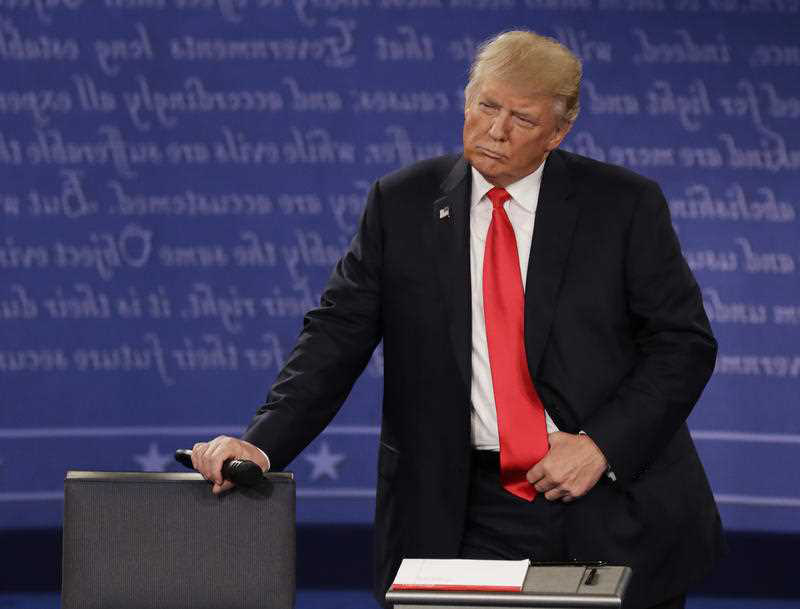 Despite Hillary Clinton virtually asking the next possible US President: “Donald, where’s your trousers?”, with a new poll showing she’s ‘pants-ing’ her rival, stocks surprisingly headed down. Remember, Hillary is seen as good for stocks, while Donald would, in all likelihood, send shares southward.

But first, to the good news! Following the second Presidential debate, which became a battle of who was the worst husband/man (Donald Trump or Bill Clinton?), Hillary has a 9-point lead, according to the NBC News/Wall Street Journal poll.

In case you missed it, there are other ‘potential’ Presidents. Clinton now has 46% support, compared with 37% for Trump, 8% for the Libertarian Party's Gary Johnson and 2% for the Green Party's Jill Stein. It gets worse for the apprentice politician, with the head-to-head race calculations saying Clinton leads Trump by 10 points — 50% plays 40%.

Given this, why would stocks be negative?

Let me list the possible reasons, but remember, it’s often a guess because there are always positive and negative factors operating on stocks and one group can outweigh the other on any one day.

These are short-term reasons why sellers could outnumber buyers at the moment on the New York Stock Exchange.

Longer term, the chart below might tell us what’s going on. Have a look and see what’s happened since February-March:

This picture of the S&P 500 index shows how US stocks have surged since that time, so in the absence of great news, this rally is running out of puff.

Alcoa marks the beginning of the reporting season, so how America’s big companies report will be important for the stock market. Throw in the US election in November, the big oil meeting after that, the Italian referendum that could affect European Union solidarity and then the Fed possibly raising interest rates in December, then stocks should be wobbly right now.

That said, if earnings surprise on the high side, Hillary wins, Vladimir plays Mr. Nice Guy and the Italians don't act like the Greeks and Poms and unsettle the EU, then we could be in for a Santa Claus rally, even with a very expected rate rise in the US.

I’m sweating on all these potential threats to turn into good news so I can wish you a Merry Christmas without reservations, which isn’t easy when you’re climbing the wall of worry.