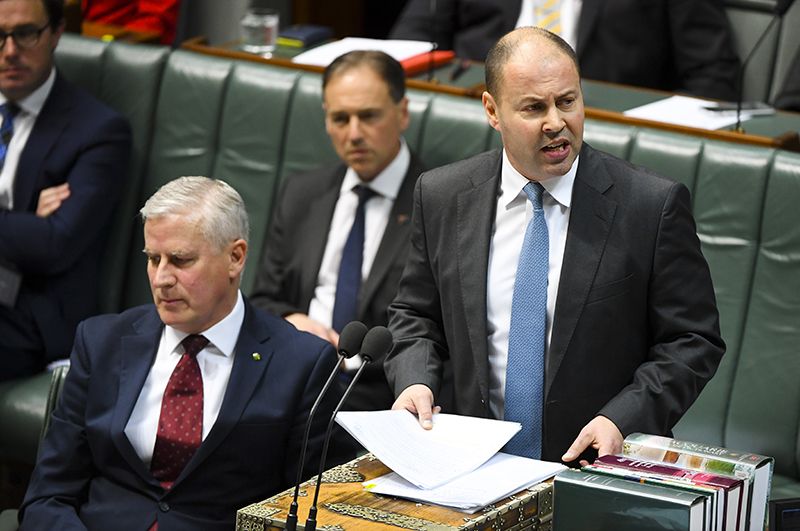 I have some advice for our new boy Treasurer, Josh Frydenberg, who got some great budget deficit reduction news yesterday and it is: “Get some guts!”

In case you missed it, the Budget Deficit in May last year was tipped to be $29 billion for 2017-18. Four months ago it was reduced to $18 billion and now it has ended at $10 billion! That’s a huge reduction and hats off to his predecessor and the businesses that created a lot of those jobs.

Now I’m not saying Josh lacks guts but too many Treasurers in the past have tended to be too restrained and have allowed expert dopes and headline hungry media types to get away with blue murder, which can hurt the economy.

Paul Keating didn’t stand for media rubbish and would rip into the greats of TV journalism, like the late Paul Lyneham, the late Richard Carleton and Mike Willisee, if he thought they were grandstanding with silly questions and issues.

I can even recall Keating being condescending to a very young and now nearly Teflon-like Fran Kelly, when she thought she’d asked him a tough question. In a Budget lock up he reminded the highly respected TEN journo Paul Bongiorno that he had “explained that before for you”, or words to that effect.

Keating knew more than most journos and he was happy to make them feel a little insecure at times when it came to how budgets and economies work.

Peter Costello was not afraid to lecture badly behaving journos too, especially when they showed economic illiteracy. Budget lock-ups and the Treasurer’s facing of the press often showed how living and breathing the Budget gave the country’s number one bookkeeper a big advantage over scoop-chasing journos.

That said, the likes of Ross Gittins, Alan Wood and other economics commentators tended not to make mistakes that left them bruised by the likes of Keating and Costello.

All this came back to me when a colleague at Sky News asked me about the 40% fall in house prices that 60 Minutes featured recently. This was a crap story and most of the ‘experts’ who were showcased in the segment have said they gave numerous scenarios for house prices but only the worst case ones were shown.

Some of the experts said their more likely scenarios of a 15-20% fall over two to three years were ignored, which I think will likely be wrong as well!

I recently interviewed the MD of BIS Oxford Economics on my TV show — Money Talks on Sky News Business — and Rob Mellor tipped Sydney prices would be down 5% this year. Since then records have shown he was just about spot on and for next year he thought a 2-3% fall was likely. He tipped Melbourne’s fall to be less than that.

Now this is a highly respected property specialising economics consultancy and I would back these guys over most when it comes to predicting property prices. However, dumb stories like these need to be hit to the boundary by the country’s top economics politician — the Treasurer — to make sure that ordinary people don’t get the wrong idea.

This is the age of “calling it out”, where everyone who has crossed any line in the sand gets called out for bad behaviour and I think exaggerating experts and really ridiculous reporters need to be brought to book by the likes of Josh Frydenberg.

When my old mate Professor Steve Keen in 2009 was predicting a real estate collapse after the GFC, the then-Treasurer, Wayne Swan should have ripped into him rather than Macquarie’s Rory Robertson, the AFR’s Chris Joye and yours truly on my TV show as well as on this website.

The power of a scaremonger, who might genuinely think he or she is right can KO confidence and the housing sector needs all the help it can get, with APRA and the Royal Commission ripping the ‘rocks’ off bankers.

We have to be really careful about the hate for banks right now, post-Royal Commission, because it means normal Aussies are finding it hard to get loans or to refinance their loans. Banks are getting scared to say yes on the basis they will be accused of giving a loan to someone who should never have got one.

That’s why Josh has to stand up and be the voice of economic wisdom to hose down the heat from the hot air that the media loves and to make the case that banks have to stop being terrified to lend. The economy will benefit if Josh gets guts akin to the likes of Keating and Costello.

And if someone wants to see a politician invoke the greatest “get some guts” line in parliament, have a look at this from the former Kiwi PM, John Key:

I know it was not on the subject of housing and prices but wouldn’t you love our pollies to have this kind of passion?