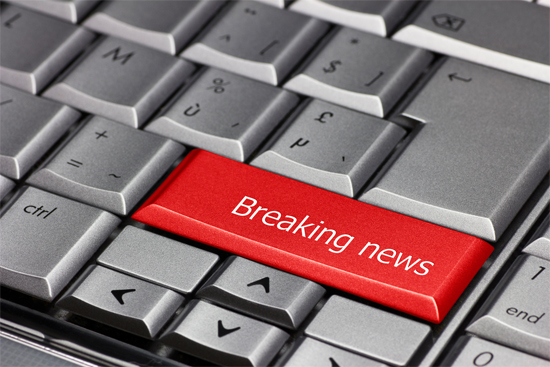 Here's a huge story, much better for you than horror or gossip!

Normal news services really do get over-preoccupied with stories that sometimes sound interesting, but are really of no real consequence to our lives. Just look at the stories of horror that head up news bulletins or the endless political battles that drag on and on.

After being in Italy for a month, where I looked for English-speaking news sources, our parochial, small picture preoccupation is nothing to crow about. On the other hand, some big picture international stories really are worthy of underlining, which is what I’ll do right now.

One thing the GFC taught us is that we can’t ignore major developments overseas. The stock market started to collapse in November 2007 and struggled across 2008 until March 2009. Over that time, anyone whose portfolio of stocks matched the All Ords could’ve seen his or her portfolio cut in half!

Now that’s a story! Australians losing half of their stock market wealth! Fortunately, our super funds are not totally exposed to stocks so they only lost amounts around 20% or so over the GFC crash time period. However, that’s a serious loss, where someone with $1 million in super planning to retire in 2008 might’ve found their balance went to $800,000!

Dropping $200,000 before leaving work is an unforgettable jolt and could’ve made many Aussies delay their retirement.

There was also an interest rate effect in the short term, as this chart shows: 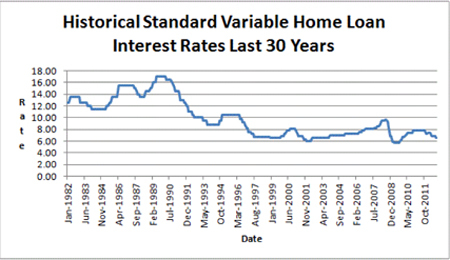 Note how home loan interest rates actually rose into the high 9% region before central banks realised that a recession was coming and rates were cut. But madness prevailed and a lot of that was driven by silly policies, not just from the RBA but overseas central bankers. Rates hit 8%, when they should’ve been lower and kept lower.

This mistaken policy in part explains why we’ve been slow to get over the GFC, which includes why wage rises are so low and so small nowadays for lots of workers.

Did I say international events can have a big impact on our life? Recall that this GFC came about from silly lending practices under the Clinton Administration that gave poor people home loans they couldn’t service. Then Wall Street bankers created investment products on these dodgy loans and the world’s financial system went pear shape!

Fortunately, my overseas story brings with it positive news, with CNBC running with the headline: “The global economy is doing something it hasn't done in 7 years and that has Wall Street excited.”

Now, you don’t need to be Warren Buffett to work out if Wall Street is excited. It should be good for our stock market, our super funds and even our economy, as well as the kind of lives it creates for all of us.

The big story, which I actually came up with on Monday for our subscribers to the Switzer Super Report, is all about a “global synchronous recovery” that has got Wall Street bulls (positive investors) even more optimistic.

According to Citi Research: “All major markets will report strong earnings growth in 2017” and this is the first upturn of this kind since 2010.

And this coincides with good economic comeback stories around the world and great Purchasing Managers Index surveys, as the chart below shows: 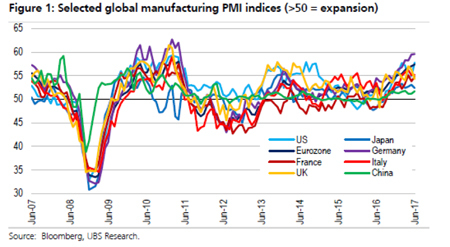 Note the slump in 2008, the rebound when governments threw money at the worldwide recession and the new trend that has Wall Street bulls excited.

What I like is that economies and markets are doing well without the help from Donald Trump’s policies, apart from some financial system deregulation. But this good story can only get better, if Donald could get a tax policy win ASAP.

Next year, there’ll be mid-term elections in the USA and the President and the Republicans know they’ll be caned if they don’t pull off some big wins for the economy. If they do pull off some good policy options, that will add to this already pretty rosy economic and market story.

And this is good news for the Aussie economy as a big supplier to the world economy, jobs, stock prices and our super funds.

And guess what? It will eventually be good for wages growth. This is a far more important story than what’s being used as click bait on websites this morning.