Have Aussies gone loco or are they the canary in the coal mine?

It might have happened but to my memory it’s never been reported before, so I’m hoping that this is a unique episode in Aussie consumer history that my fellow countrymen and women have been just a little crazy. If I’m wrong, it could be that the consumers of Australia are more spooked about the future than I’ve been guessing.

To those confused, let me explain.

Yesterday, the ScoMo surprise election win seemingly inspired the businesses in the NAB business survey to give vent to their positivity going forward by driving the business confidence number from 0 to 7 in the space of a month. This was the biggest jump in this reading in six years and the highest result for 10 months. It was like businesses had washed away their fears about elections, Bill Shorten’s tough policies and the Royal Commission fallout on lending and house prices. At the same time, the business conditions number went from 3.3 to 0.6, which says what you’d expect — the current situation for business isn’t great. This picture below says it all, with the black line showing life in business has been tough for over a year. 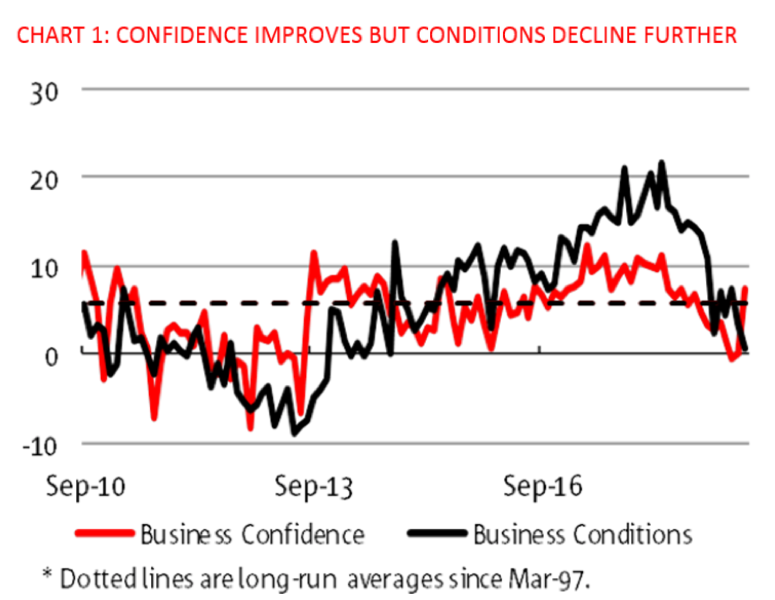 The head of NAB economics, Alan Oster, thinks this confidence spike will be short lived and yesterday’s consumer confidence number might help his negative view come to fruition.

“Forward-looking indicators suggest that the bounce in confidence is likely to be short lived and that conditions are unlikely to turn around any time soon,” he observed. “We will also continue to closely watch the employment index for a lead on any turning points in the labour market.”

I think Alan is jumping the gun by writing off the Oz economy. Tax cuts, rate cuts, infrastructure spending, a lower dollar and, hopefully a Trump trade deal could easily encourage business and consumer confidence and help boost investment and economic growth. But there are a lot of ‘ifs’ and ‘buts’ in my story.

Anyone who says things are economically honky dory isn’t looking at the run of data, which is more bad than good. But there is good stuff that could help build a base for my hoped-for turnaround.

Here are the most positive economic stats of recent times:

•       The planned investment estimate was up 12.8%. This is the strongest increase in seven years!

•       The house price fall is slowing and auction clearance rates are on the rise.

I won’t labour you with the bad stuff because every media outlet does that, but know that economic growth has slipped from 2.3% to 1.8% and was supposed to be over 3% by now, according to RBA and Treasury forecasts.

What explains why the Westpac consumer sentiment reading actually fell, despite the ScoMo win that seemingly gave business a surge of confidence? In trying to answer this question, it crossed my mind that maybe my fellow consumers have gone loco or they might be the canaries in the coalmine, telling us that the economy isn’t just crook but is getting close to cactus!

On ScoMo’s sex appeal to consumers, he actually did excite the shoppers of Australia, with Westpac’s Matt Hassan pointing out that those quizzed after the election but before the survey period ended were well into the good vibes of the Coalition win, with the index spiking to 106.8 against a reading of only 101.3 in May. However, after June 4, the respondents’ confidence slumped to 95.5, which left the reading for the month at a lower 100.7.

What spooked them? Well, first of all there was the Reserve Bank’s interest rate cut, which made me think maybe Aussie consumers are all smoking something, as a rate cut should buoy their confidence. But maybe the economic growth number the day after got them thinking about their jobs.

Yep, headlines like this could rattle even the most positive of consumers: “Weakest Aussie economic growth in 9½ years!”

I would have thought an interest rate cut would lower monthly repayments as well as help make the transference from interest only loans to normal principal and interest loans less punishing. A rate cut should make those with mortgage stress less stressed, spending should be easier and small businesses should be happier with lower cost loans.

However, slower economic growth, hot on the heels of falling house prices and talk about trade wars leading to recession, and all the doomsday talk about debt and so on (which the media loves to highlight) might explain why consumers are totally rational to be spooked.