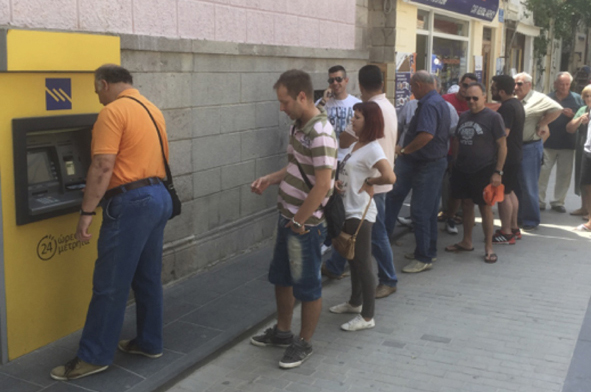 Has Greece overplayed its hand to lose the game?

The hardest workers in Greece over the weekend had to be the people stacking money in ATMs! But they could be out of a job by Monday if nothing comes to surprise us after the Eurozone finance ministers virtually said to the Greeks: “Enough is enough!”

The line in the sand came late on Saturday when at the latest debt negotiations meeting the Greek PM, Alexis Tsipras pulled the referendum rabbit out of his hat. But the trick didn’t impress his EU buddies, who never had high hopes that a positive outcome was on the cards.

"We have no basis for further negotiations," German Finance Minister Wolfgang Schaeuble said, ahead of the meeting. "Clearly we can never rule out surprises with Greece, so there can always be hope. But none of my colleagues with whom I've already spoken see any possibilities for what we can now do."

And after the Saturday’s surprise suggestion from Mr Tsipras, Finland's Alexander Stubb called it "potentially a very sad day, specifically for the Greek people. I think with the announcement of this referendum we're basically closing the door for any further negotiations."

Earlier in the day, Greeks were celebrating the cleverness of the referendum idea. Later that day, when it was learnt that the Germans said they wouldn’t wait until next Sunday to see how the Greek people voted on the latest debt proposals, my travelling companion, a resolute son of Greece, formally declared war on Germany at 6:45 pm. I wonder how many other Greeks came up with the same whacky idea?

So, where are we?

Well, effectively, the Eurozone finance ministers have said no to the Greek petition to push out the June deadline to give time to Greece to vote on the latest debt proposals from their creditors.

At this stage, it’s thought the Greeks haven’t got the €1.6bn due tomorrow (June 30). If this is right, then the default happens, and the most likely result is that a Grexit follows, the drachma returns, a new economic drama starts for the Greek economy, and we watch to see how negatively financial markets will respond to the news.

Always an optimist, the Greek Finance Minister, Yanis Varoufakis, thinks something could materialise. "In these crucial moments, the Greek government is fighting for there to be a last-minute deal by Tuesday," he said.   (BBC)

For what it’s worth, Greek MPs voted yes to the referendum idea, with the PM telling his people to reject the creditors demands, which explains why the Eurogroup weren’t keen to waste time extending the deadline.

The next question is, what happens to the Greek banking system after Tuesday? It’s in the hands of the European Central Bank and one has to hope that the European Commission and its fellow lenders, which includes the ECB, have worked out what might happen post-Tuesday and they have plans to minimise the fallout.

When the Greek government thought it had made substantial concessions at the beginning of the week, the creditors said it simply wasn't enough.

Much will depend on the outcome of the referendum called by PM Alexis Tsipras, if it takes place on schedule. And much will also depend on the European Central Bank - and whether it believes it can still allow funds to flow, to prevent banks in Greece from collapsing.

Come Wednesday, the queues at banks and ATMs could cripple the banking system, though it could start as early as Monday. This is what I saw on Saturday on the island of Lemnos. It wasn’t like this before the referendum big idea and says that Greece could have played its last card. 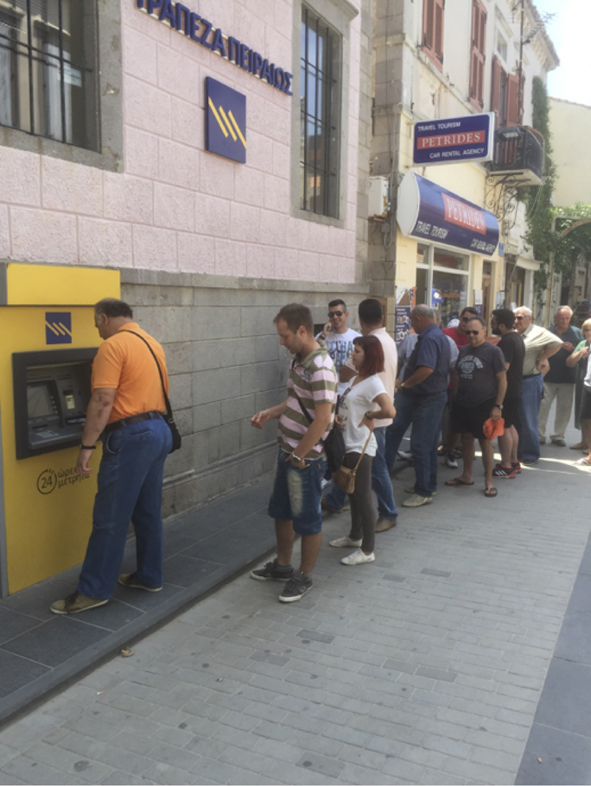 Meanwhile, IMF boss, Christine Lagarde, anticipates the default on Tuesday but did raise the prospect of doing something if the Greeks vote yes to the creditors apparent tough repayment proposals. If the referendum proceeds and the result is a “resounding yes”, she indicated that there could be a “let us try” attitude from the three big lenders — the IMF, the ECB and the European Commission.

All this said, something at the 11th hour can't be ruled out in this long, drawn out Greek debt drama with the French Finance Minister Michel Sapin still holding out an olive branch to Greece.

"This is not a Greek exit from the Eurozone," the BBC reported after crisis talks between the Eurogroup and Mr Varoufakis on Saturday. "The 18 countries, apart from Greece, all said clearly that Greece was in the euro and should remain in the euro whatever the difficulties of the moment."

But while all of this sounds positive, when you understand what lies ahead for the Greeks, it really looks hopeless.

All this from a country in recession and with unemployment at 25.8%. Of course, it’s easy to be critical of the Greeks who have got themselves into this mess via bad governments, tax evasion and excessive payments to public servants (where one in five workers are government employees), while some have retired on 13-month pensions. As

Yanis Varoufakis has said from years of “cronyism and corruption”, the whole EU austerity program has been tough. In fact, the Greek’s primary budget position is in surplus to the tune of 5% plus if you adjust it for its cyclical position. Note the chart below: 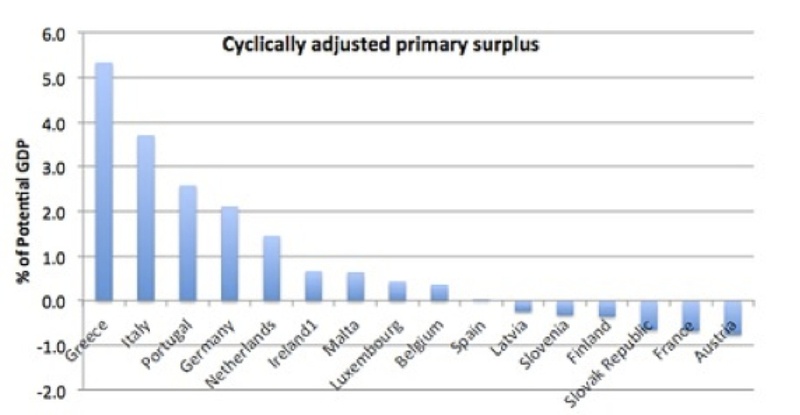 A country with unemployment close to 26% should really be running a deficit to get growth rising and the jobless rate falling to bolster tax collections to eliminate the deficit.

It might be better for Greece to kill off this Greek tragedy and start again. It will be painful in the short run for the Greek economy and probably global financial markets but given the level of indebtedness, the unwillingness of the creditors to go soft and the attitude of the Greeks generally to the need to change the way they do things, it might be wise if this referendum card ends up being the last one played.