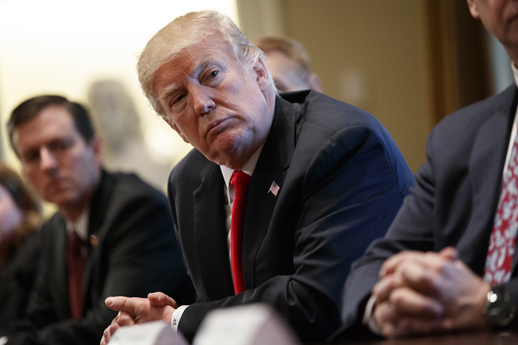 Has Donald's tariffs trumped his only point of credibility?

Just when you thought Donald Trump couldn’t do anything more to make you think “only in America!” along comes his big idea about whacking a 25% tariff on steel imports and a 10% slug on aluminium made outside the USA.

But what I can’t understand is why would he cheese off the only group who’s prepared to ignore his obvious failings as a US President and world leader — the business heavyweights that dominate Wall Street?

There’s been talk of allies like good old Oz getting an exemption but that’s purely talk coming from our homeland. Meanwhile, China and Europe are returning fire saying they’ll be loading up their protection guns with retaliatory import duties in order to get even.

And they might achieve just that, with China, for example, possibly targeting a company such as Apple, which sells a heap of products into the country.

In early February, the company announced an 11% increase in its first-quarter revenue from mainland China, Hong Kong and Taiwan to US$17.9 billion, up from US$16.2 billion in the same period a year ago.

So why is Trump going down this line? Well, he promised this foolery during his election, so at least he gets marks for keeping this promise but the economic effects (the pluses and negatives) will add up to a subtraction of benefits to the US economy and the American people.

One thing that these US TV shows (from the likes of Netflix and Apple TV) have reminded me that the operatives who work out of the White House are always respectfully talking about “the Amer1cian people”. We don’t say “the Australian people”, instead we say “Australians”, so what gives with that US nicety?

Whatever, economics says that most of the American people will lose out, even if “steel and aluminium people” gain jobs and business because of Trump’s political opportunism.

Retaliation aside from the likes of Europe and China, which is bad enough, it’s the chance that the world could engage in a trade war that could kill jobs worldwide, lower economic growth and even lead to war!

Yep, it’s no coincidence that a Great Depression, a US tariff and World War II all showed up in one decade.

So why are tariffs so bad for the economy and the people who live in it?

All manufacturers who import steel or aluminium will have higher costs. They could transfer to a local producer but costs will be higher. The US doesn’t make sheet aluminium, so they’ll keep on importing unless a new local producer comes via this tariff.

As Fairfax’s Jessica Irvine showed, there’ll be a lot of US losers. “Car, boat and plane manufacturers, medical device companies, canned goods and drinks producers and the building sector more broadly will have little choice but to pay the higher price and seek to pass on the higher cost to consumers,” she wrote over the weekend.

Yeah, but jobs will be created though they will be at the expense of sectors and workers in those areas of the economy that don’t have tariff protection. So 20,000 Apple workers could lose out to 20,000 steel workers but that’s assuming the losses and gains will be equal.

The retaliation effect could mean job losses could easily trump job gains. This whole exercise really undermines the one point I used to defend the existence of Donald Trump in a job he clearly is not suited to: the economy.

His policies of less regulation, especially in the financial area, tax cuts and infrastructure spending all gave him a tick from business leaders, most non-left economists (i.e. right-wing and balanced ones) and, of course, Wall Street.

We know that because the Dow Jones has gone up about 30% since he got the top gig. While he didn’t cause all that, he did help it substantially, along with the Fed, which has been slow to raise interest rates.

But this is another problem for tariffs — they raise prices — and when they increase the cost of steel, one of the most important inputs in a modern economy, it can add to inflation. Of course, this then makes interest rate rises even more necessary and, in part, explains why Wall Street infected our stock market last week.

When Bob Hawke and Paul Keating started cutting tariffs in the 1980s, all the vested interest groups — manufacturers and trade unions — complained. However, since 1991, we’ve had the longest ever run of economic growth for any world economy, since growth records have been officially collected (i.e. 26 years). Lowering our tariffs was crucial to that result.

For anyone worried about BlueScope Steel as a huge exporter of steel, well, it produces in the USA, so it will benefit. But who knows what retaliation brings?

One thing the economics of the past 40 years has shown me is that tariffs create opportunities for the least competitive and creates jobs in the short-term but, because there’s less competition, there’s no progress and long-term jobs are lost.

I know Trump-lovers will find excuses for his actions (such as what China does to undermine free trade) but the US President should not punish the world economy.  Instead, he should respond in a targeted way against any trade injustice by any one country.

This is a political play from the most unpopular US President in living history. At least one guy will be happy and that’s Jimmy Carter, who always gets singled out on The Simpsons as the worst US President of all time.

And don’t think I’ve always been a Trump doubter. I gave him the benefit of the doubt when I heard his acceptance speech and then I noted Wall Street leaders embraced many of his policies. But it has been downhill from there and no sensible person could buy the Trump story since then.

It’s OK if it’s a TV program up against Keeping up with the Kardashians but leading the USA is significantly more important, don’t you think?