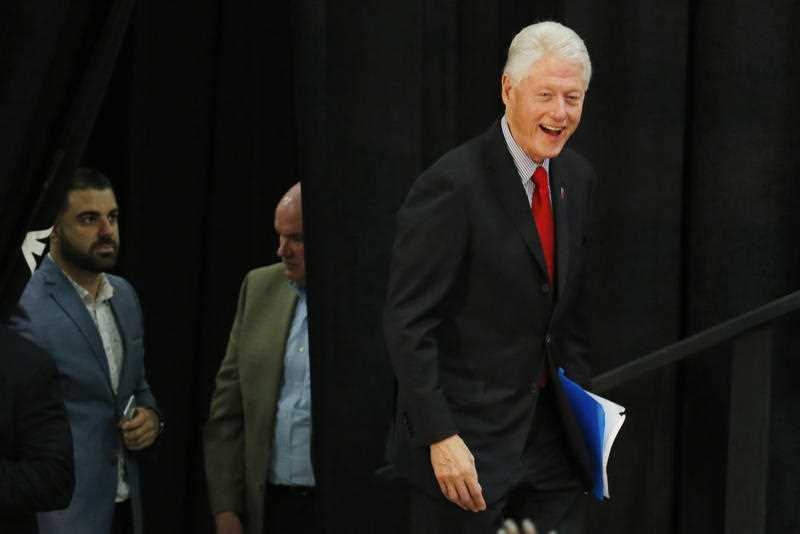 Give up the political trivia. This election rests on the economy!

Perhaps it’s because I’m a former egghead academic that I’m always bemused how political junkie media commentators care so much about matters that really are of small consequence, like where refugees are processed, whether refugees are illiterate or not, Malcolm Turnbull cancelling a walkthrough a shopping mall or Bill Shorten having man boobs!

I know this stuff sells newspapers and gives my mates ‘stuff’ to talk about but I thought Bill Clinton educated us in the 1990s that when it came to the reality of politics “it’s the economy, stupid.”

Overnight, Clinton showed that with age, wisdom can come, with CNN reporting that “on a campaign swing through Puerto Rico Tuesday, the former President was asked by a reporter whether he had any response to Trump's latest attack on Twitter — alluding to Bill’s past infidelities and charging that he was the ‘worst abuser’ of women in US political history.”

His reply was a ripper.

"No. I think people are smart enough to figure this out without my help," he said.

This comes as Donald’s mistreatment of women has been paraded lately, as his popularity soars.

But enough of the country that has taught the media to concentrate on the gripping but trivial issue, at the expense of the really important.

Remember, “it’s the economy stupid” and even surveys of voters confirm this, that is, we rate political parties on what they can achieve with economic management. In fact, I believe Australians are some of the most economically-interested people in the world. This is a country where the Budget is a media-dominating event, unlike most other nations. And since the days of Paul Keating, who I think both popularized economics as a hip-pocket and voting issue and underlined its overall relevance, it has had a huge impact on the ultimate poll.

There were other issues why John Howard was beaten by Kevin Rudd in 2007 but the Reserve Bank raising interest rates was a huge negative for the Coalition. Labor sneaking back into power in 2010 via the three independents had a lot to do with the GFC, despite Wayne Swan being named the world’s best Treasurer! That still remains one of the funniest decisions of all-time but he was genuinely up against the biggest bunch of dopes all running economies heading to recession.

The fact that Labor won that election was because the Government spent big and protected the banks, which stopped a recession and prevented unemployment going over 6%.

Labor’s real problem was not starting to fix the Budget before the 2013 election and this helped make Tony Abbott look appealing.

Coming out today is a huge data point for Malcolm and the Coalition: the jobless and the employment numbers.

Bill Shorten tries to portray the Coalition as economic nincompoops because of the rising Budget Deficit but they, in consort with the Greens and the Palmer crew, stopped the ‘too tough' Budget of 2014.

By the way, the economy was slowing as Labor lost power, so I wasn’t too unhappy that Joe didn’t get away with his horror Budget. By 2015, he worked out that I was right on the economy so his second Budget was a small business bonus Budget. And along with a falling dollar, it helped us grow at 3%. That was a great result. And yes, 300,000 jobs were created in a year and that was an economic test that the Coalition passed with flying colours.

It is something to boast about as there were professional economists quoted in the Fairfax press, with glee, who argued we were heading for recession and unemployment over 6.5%.

So today’s unemployment numbers and how many jobs have been created over April will be a confirmation that our economy is doing better than expected, which I’ve been arguing for 12 months, or it will tell us that the doomsday merchants are starting to look credible.

I do have to add that one month’s figures can be very risky but when it comes to headline makers, if it bleeds it leads.

If the news is healthy and confirming the surprisingly good economy we’ve seen in the past 12 months, it will probably be treated as a ‘ho hum’ yarn so Bill’s man boobs could get a second run!

I’m not really disappointed in Australians but I am really embarrassed by some of my media mates when I’m in the company of really intelligent people.

For the record, in March, the unemployment rate fell to a two and half year low of 5.7% and the great old Aussie economy created 26,100 jobs. For the sake of my countrymen and women, as well as my small-to-medium business buddies, I hope this positive trend continues today.