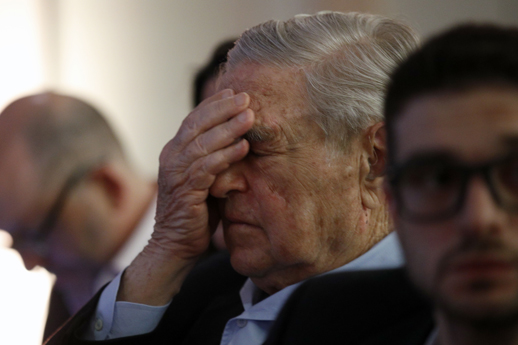 A famous yet unknown Aussie has slammed one of the world’s most famous investors as ridiculous for predicting another GFC Armageddon scenario! Go a very gutsy James Gorman!

James who? Yep, James Gorman and he’s a classic case of how we worship false idols in this country, addicted to news about sports stars, actors, musicians, social butterflies in gossip columns and politicians.

These are the stories that dominate our life with the media. However most people have never heard of James Gorman, who happens to be the CEO of one of the most influential investment banks on the planet.

Yes, I know some of you might be reacting negatively to a famous Aussie who’s just a banker, given the current ‘popularity’ of bankers nowadays, but this bank’s positive achievements are worth noting, so here goes:

In 2014, Gorman himself was included in the 50 Most Influential ranking by Bloomberg Markets magazine.

And sure, like all banks, there are stories James would like to have erased from the annals of banking history. But there are horror stories with telcos, law firms, accounting giants and even church groups that show that any big, important body run by people are all at risk, and so are the people who work with them. It’s life.

Now to the story, and James has reacted to a worrying warning from George Soros, who’s seen as one of the world’s most influential money  market players.

In 1992, Soros became unforgettable as he shorted the UK’s pound for $US10 billion. His story of success with this trade gave him the tag “The Man Who Broke the Bank of England!”

His theories, he says, give him insights into market bubbles and critical points that tell you to get out or get in and at 88 years old, he continues to command market and media respect.

That said, he has made some big calls that ended up wrong. Luckily for him, the media forgets, though it does show how important big names are to flogging newspapers and digital content.

Yesterday I toyed with George’s latest scary call, where he tipped that a GFC-rerun looks like an imminent possibility. As Bloomberg reported: “A surging dollar and capital flight from emerging markets may lead to another major financial crisis, investor George Soros said, warning the European Union that it’s facing an imminent existential threat.”

He links the termination of the Iran nuclear deal, the EU/USA tensions (economic, political and even military), Italy’s exit from the Eurozone possibility and the unwinding of central bank bailout programs, as all giving you reason to read and contemplate a spooky Soros scary story.

But not our local boy James Gorman who branded George’s GFC Mk II call as “ridiculous”. And I hope he’s right with his voice of reason response to the Soros calamitous call.

“Honestly, I think that's ridiculous,” Gorman said in an interview with Bloomberg Television in Beijing on Thursday. “I don't think we're facing an existential threat at all.”

In an age of volatility often created by Donald Trump’s tweets, which herald possible unexpected trade, military, political and economic policies and then the reactions from those targeted in those tweets, it’s easy to see sense in the Soros predictions. It’s especially so with the possible Italian exit from the EU family a possibility, if the upcoming election delivers a bad result. Italy is the third biggest economy in the Eurozone and so an ‘It-exit’ would be a global market and economic rattler!

So can we trust an Aussie CEO investment banker over George Soros? Soros has been good but he also has been known to manipulate the media with some arguing, without proof, that there was money-making madness in his method. Would a legendary hedge fund manager like George do that?

Against that, a lot of investment bankers didn’t see the GFC coming but they were blindsided by the debt ratings agencies that did not properly rate big parcels of loans, which were being sold around the world as AAA-assets when they actually had ZZZ-sub prime loans in them!

Alan retired from Macquarie in May 2008 and Lehman Brothers collapsed on 15 September 2008, which showed that this famous Aussie investment banker has pretty good market vision.

I hope James is on par with Alan.

By the way, the CBA’s new boss, Matt Comyn, left the bank to work at Morgan Stanley but only lasted a year before coming back to the bank. And from that day banking insiders said that he was seen as the man who would be ‘king’.