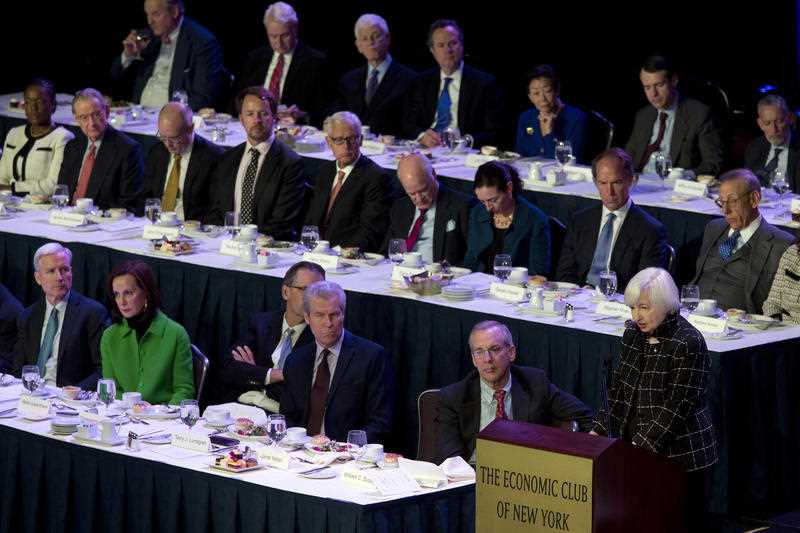 Fed boss didn't screw up but it's not all good news for us!

The big question this morning for anyone who wants stocks to go higher is: “How did the Fed boss, Janet Yellen, do?” Well, given the Oz dollar is now around 76.35 US cents, the answer is pretty good and it goes double for the Yanks.

The Dow was down around 100 points in early trade but after Yellen spoke at an Economic Club of New York function, with an hour to trade on Wall Street, the most watched index was up nearly 100 points, which is a sizeable turnaround. And a lower US dollar, which is implied with a higher Oz dollar, should be good for commodity prices as they’re priced in greenbacks.

Continuing the chain of thought and higher commodity prices should be good for BHP, Rio and the rest of the mining fraternity. And because yesterday the markets were fretting over our banks’ exposure to miners as lenders to this troubled and exposed sector, banks should have some friends today.

By the way, this anti-bank sentiment was largely driven by fund managers, who have to show-and-tell their quarterly results by the end of the week. Banks have been shorted by many smart Alec fund managers. Fund manager Charlie Aitken said this explains a lot about why our banks’ share prices have been going south lately — damn short selling!

The most important takeout of Yellen’s speech was probably that “economic readings are mixed and it is appropriate to proceed cautiously.” This is a classic dovish statement that’s good for stocks in the short term as it rules out an April rate rise. However, it gives rise to other concerns, that underline the trouble with what key market players are thinking right now.

It also gives rise to thoughts such as this: "The market is happy. It's good news for equity prices on a dovish Fed, but a dovish Fed also indicates there are problems out there, which is concerning as well," said Douglas Cote, chief market strategist at Voya Investment Management. (CNBC)

Stock markets aren’t sure how strong the US economy is so the thought of rising interest rates worries many of its key players. Recent data has seen economists pull their economic growth forecasts back but this other data is in conflict with strong employment figures.

So job creation and a falling unemployment rate say the Yanks need rate rises but GDP growth (which is only OK) says “wait a bit!”

I pray for many things — happiness, success for my family, a profitable business, a winning footie team and the US to prove the doubters wrong — but at the moment, for the last two issues, my prayers aren’t being answered!

When the US looks strong for rate rises, the greenback will rise and our dollar will fall but stocks will go up on a strong US and that’s when global GDP forecasts will rise, commodity prices will go up, bank share prices will head higher and our stock market index will also go up.

It would be great if Europe, Japan and China all added to the better looking global growth story and that’s when the short sellers and doomsday merchant market influencers would be nuked!

Unfortunately, this looks a way off yet and we’re a chance to see it happen this year but then again it might not. This uncertainty is powering the stock market volatility that was seen at its worst in January and early February this year.

The bulls will stampede when the world economies stop needing central banks for growth. If growth doesn’t show, then we’ll have to deal with those damn bears!